SMM9, March 27: global financial markets were in turmoil this week, with confidential documents leaked at the beginning of the week, including Morgan Chase Bank, Standard Chartered Bank and other well-known financial institutions suspected of money laundering. Bank stocks were "collapsed" almost across the board on Monday. At the same time, the global COVID-19 epidemic has deteriorated sharply, with a surge in new confirmed cases in Europe and other countries, leading to tougher blockades, sparking fears of economic recovery and panic that has triggered falls in stock markets and commodities in many countries. In addition, Federal Reserve Chairman Powell is now calling for fiscal stimulus, but the unexpected news comes that the US Supreme Court Justice has died and the market is pessimistic about the new round of fiscal stimulus package. It has also led to an influx of money into the dollar as a safe haven, while precious metals such as spot gold and silver have tumbled collectively.

In terms of foreign exchange, the dollar index hit a two-month high near 94.74, a multi-day shock range; the US index rose sharply this week, mainly due to the slowing economic recovery, the rise in European coronavirus infection, the uncertainty of the US stimulus plan and the impact of the upcoming US election. And global stock markets have plummeted, non-US assets have been sold off, and demand for safe havens for the dollar has soared.

In terms of the stock market, U. S. stocks fell for the fourth week in a row, with the Nasdaq performing the best on Friday, the biggest gain in more than four months, but the worst overall performance throughout the week. In addition, the S & P and Dow fell for the longest straight week since August last year. European stocks fell even more sharply, with European stocks continuing to fall across the board, with the exception of British stocks, which suffered their biggest weekly decline in more than three months this week. Europe's Stoxx 600 index fell 3.60% this week, its biggest weekly decline since mid-June.

In terms of precious metals, at a time when the dollar rebounded strongly and gold prices technically broke, spot gold plummeted this week, falling as low as 1848.60, falling below its previous low of 1862, and finally closing at around 1860, the lowest weekly decline since March 13 this year. Spot silver fell even more sharply, falling as low as 21.64, the lowest since July 22, with a weekly decline of 15%, the biggest decline since March 13. In terms of precious metals in the inner market, it was suppressed first and then rose this week. In the first four trading days, Shanghai Bank was overcast for four consecutive days. On Tuesday, the main decline of Shanghai Bank was more than 9%, and the weekly decline was 15.29%. The analysis points out that after entering the fourth quarter, the price of gold will fluctuate more violently. In the fourth quarter of this year, global markets will gather three major risks, including the US election, a massive stock sell-off and further fiscal stimulus. 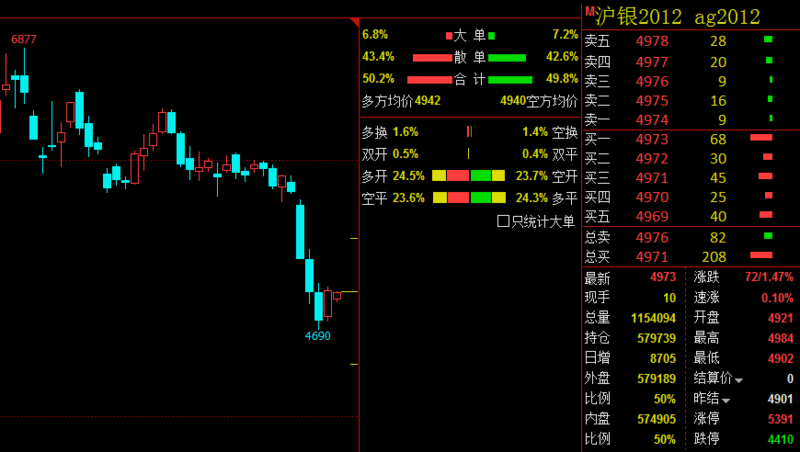 The Prospect of Financial and Economic events next week

There will be a round of bombardment next week, starting with a new round of Brexit trade negotiations between Britain and the European Union until October 2. HSBC believes that external challenges, difficult economic growth paths and limited fiscal flexibility all mean that the pound will fall, and the window for Britain to sign a free trade agreement with the European Union will close quickly. The real question for sterling, however, is whether these events increase or reduce the possibility of a free trade agreement between Britain and the EU, where the atmosphere from the EU suggests that things are becoming more and more difficult. anything that reduces the probability of a free trade agreement will put pressure on the pound, and if Brexit without an agreement is the most likely outcome, then the fall in the pound will not be limited and specific. In this case, the pound will fall sharply against the dollar, but even if an agreement can be reached, the barriers to trade and investment between the UK and the EU will still be greater in the future than they are now.

And on Friday, the United States will release its September jobs report. Economists expect the much-anticipated September jobs report to show that job growth is lower than in August. The market generally expects non-farm payrolls to be 920000, compared with 1.37 million in August. Analysts at Wells Fargo said that if Trump was thought to win, there could be a positive move in the risk market and a sell-off in the bond market, pushing yields higher. He said Trump is seen as better for the stock market and the economy, and Biden is expected to push for higher taxes and more regulation.

In addition, ECB President Christine Lagarde spoke at the European Parliament hearing. A number of Fed officials will give speeches on the "novel coronavirus epidemic and the economy" and discuss issues related to the United States and the global economy, which may have a certain impact on the market.

Pele, governor of the Bank of England, attended an online event

Williams, chairman of the New York Federal Reserve and permanent voting committee of FOMC, participated in the discussion of Libor.

In 2020, Cashkali, chairman of the Minneapolis Federal Reserve and FOMC voting committee, delivered a speech on "novel coronavirus epidemic and economy".

Williams, chairman of the New York Federal Reserve and permanent voting committee of the FOMC, participated in the video dialogue hosted by the New York Economic Club.

In 2020, Kaplan, chairman of the Dallas Federal Reserve and voting committee, presided over discussions on US and global economic issues.

In 2020, Huck, chairman of the Philadelphia Federal Reserve and FOMC voting committee, delivered a speech on "broad labor recovery".