SMM9 March 25: according to the latest customs data, copper scrap imports in August were 81027 tons, an increase of 7.87 percent over the previous month, and imports rebounded in the second month, in line with previous expectations. The cumulative import of copper scrap from January to August was 586758 tons, still a sharp decrease of 46.21% compared with the same period last year. With regard to the expected amount of copper scrap imported in September, according to SMM, the joint and several liability of the new solid waste law just implemented this month has led shipping companies to carry solid waste cautiously, and there are no small difficulties in transporting waste copper from Europe, the United States and other regions to China, which has restrained the scrap copper market and directly led to the extension of customs inspection time for imported waste. However, the transportation problem is mainly solved by suppliers, while domestic enterprises only need to have approval documents. In September, the 12th batch of approval documents issued more than 130,000 tons, alleviating the shortage of market approval documents in a short time. Taken together, copper scrap imports may continue to pick up in September, but the volume should not be very optimistic. 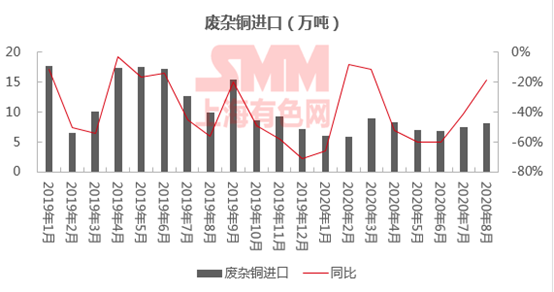 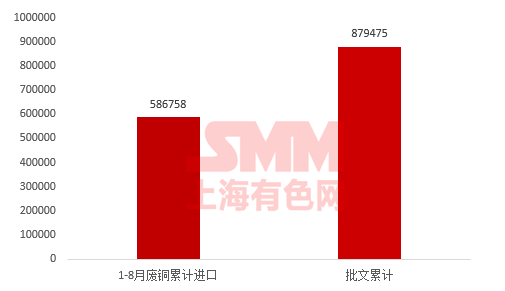 Copper ingots as an important substitute for waste copper raw materials, affected by China's goal of gradually reducing the import of solid waste, since 2018, in order to make up for the gap of copper scrap, the import volume began to rise. The gap in scrap copper is even larger this year, directly stimulating a surge in imports of copper ingots. According to customs data, copper ingot imports in August were 46224 tons, up 2 per cent from a month earlier, slowing down, but still up 161 per cent from a year earlier.