The anti-dumping duties are crucial to the survival of the European aluminum value chain, which is crucial to Europe's transition to a digital and green economy, the head of the European Aluminum Association said in a statement. The investigation was caused by a complaint filed by an industry group representing seven producers. China's exports of semi-processed aluminium products to the EU more than doubled in the five years to 2019, according to the industry group. Euroaluminium's members include Norway's Hydro (Norsk Hydro), Rio Tinto (Rio Tinto) and Alcoa (Alcoa). Euroaluminium said the provisional anti-dumping duties were expected to begin on October 15 and the investigation would be completed in April 2021. 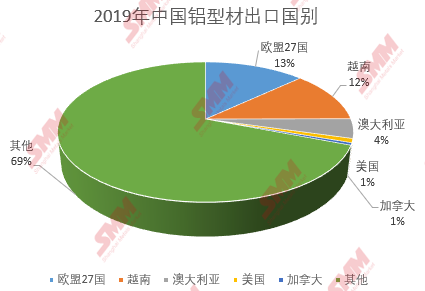 However, as far as this year is concerned, because of the impact of the epidemic and the fact that China has basically led the world in resuming work after the disaster, the actual export of aluminum profiles this year is much lower than that of last year. Domestic demand is still the main source of aluminum profiles, and exports account for less than 10% of the total demand. On the other hand, there are more than 180 countries in China's aluminum profile export. after the implementation of anti-dumping duties in the European Union, some domestic profile enterprises give up their exports and turn to China, while others open up other overseas markets. Generally speaking, the EU temporary anti-dumping duties will have a greater impact on the enterprises themselves, but have a limited impact on the entire domestic aluminum supply.

Most Read
feature
1.IMPACT ON 2020-21 WINTER PRODUCTION CUTS
feature
2.SMM Webinar Series: China Policies Update
price review forecast
3.SMM Evening Comments (Oct 16): Shanghai nonferrous metals ended mixed
data analysis
4.The new standard of imported scrap aluminum to be launched in November
price review forecast
5.SMM Morning Comments (Oct 19): Shanghai base metals traded mixed after the release of Chinese economic data
China Metals Market
Privacy policyCompliance CentreSMM Credit ServiceContact UsAbout UsTerms & ConditionsSitemap
Notice: By accessing this site you agree that you will not copy or reproduce any part of its contents (including, but not limited to, single prices, graphs or news content) in any form or for any purpose whatsoever without the prior written consent of the publisher.