SMM9 March 23: today's domestic non-ferrous metals market green manure red thin, by the end of the day, Shanghai Aluminum fell 1.68%, Shanghai Zinc fell 1.24%, Shanghai Copper fell 0.56%, Shanghai Nickel fell 0.39%, Shanghai lead rose 0.46%, Shanghai Tin rose 0.68%. The dollar index continued its rally on Wednesday, hitting another eight-week high of 94.19, supported by good US economic data and concerns about a second wave of outbreaks in Europe and the UK. Analysts pointed out that as the novel coronavirus epidemic hit confidence in Europe, the dollar may continue to rise in the short term, but the uncertainty of this year's US presidential election indicates that the dollar may tend to fluctuate more violently.

In terms of lead, Shanghai lead negative, below by the 5-day and 10-day moving average support, KDJ index is still upward exposure, at the same time, the fundamentals downstream consumption is light, but the rising price of waste batteries makes the cost support line of recycled lead move up, it is expected that Shanghai lead will still be mainly horizontal adjustment in the short term.

[brief Review of lead in SMM period] the trend of short-term consolidation of high-level lead in Shanghai remains unchanged.

In terms of nickel, due to the unabated strength of the US dollar, it has been broken on the 60-day moving average, and it is expected that the nickel market will still be under pressure to test the bottom in the short term, while Shanghai Nickel remains in a weak position waiting for the guidance of the outer disk trend. therefore, we should pay attention to the support strength of 14250 US dollars / ton below Lunni and 111000 yuan / ton of Shanghai Nickel, and it is expected to stop falling and rebound only after the macro mood is stable.

[SMM Nickel brief Review] the US Index breaks the position and Shanghai Nickel pierces the 60-day average short-term pressure and still waits for the guidance of the outer disk.

Crude oil fell 1.05 per cent in the previous period and US oil fell more than 1 per cent on Wednesday after an industry group reported an unexpected increase in US crude oil inventories, reigniting concerns about fuel demand. Concerns about fuel demand triggered a sharp fall in the oil market earlier this week. Us crude oil stocks unexpectedly rose last week, while gasoline stocks fell by nearly 8 million barrels, according to data released by the American Petroleum Association (API) on Tuesday.

In terms of precious metals, Shanghai gold fell 1.68% and Shanghai silver fell 7.45%. After yesterday's limit, Shanghai silver fell again on Wednesday, the more-than-expected deterioration of the epidemic in Europe, the uncertainty of the US election and other factors triggered market panic, and the US dollar once again became the first choice for safe haven. the market made an indiscriminate sell-off that led to a fall in precious metals. 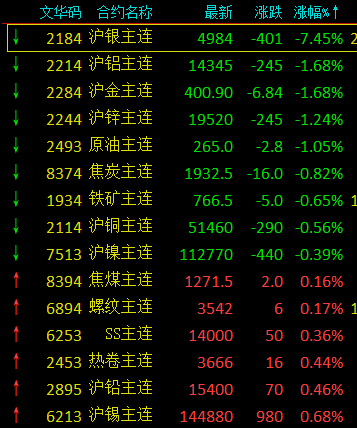 The domestic commodity market continued the state of large-scale capital outflow, with a net outflow of 4.168 billion yuan from the Mandarin Commodity Index. The oil chain suffered 1.937 billion capital abandonment, of which nearly 1 billion fled the soybean oil index. The weak precious metals continued to suffer 1.458 billion capital reduction, with outflows of 851 million yuan from the silver index. 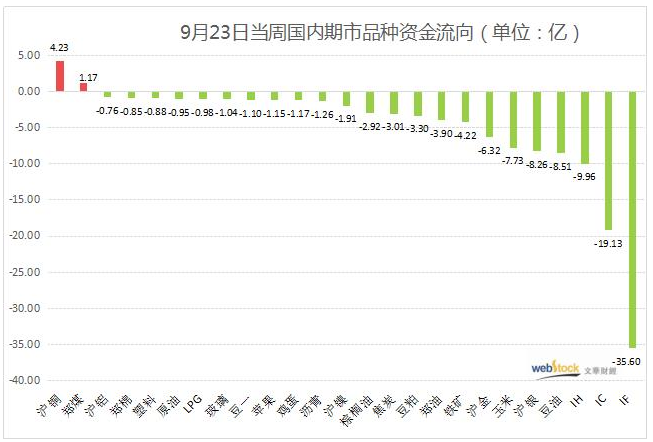