With regard to copper, Federal Reserve Chairman Powell said that the road to economic recovery in the United States is long and full of high uncertainty, and the market expects the agreement of a new round of economic stimulus bill to be passed as soon as possible, but the current bill has yet to bear fruit, superimposing the risk of a second epidemic, aggravating market concerns and limited upside space for copper futures.

[summary of SMM Morning meeting] the path to economic recovery in the United States is full of uncertainties. Copper upside space is limited.

In terms of zinc, in terms of zinc in Shanghai, the second fermentation of overseas epidemics superimposed uncertainty in Sino-US relations triggered a rise in market risk aversion, dragging down zinc prices. From a fundamental point of view, processing fees have been continuously reduced, and the impact of the superimposed epidemic has led to an expected increase in mine shortages in the fourth quarter, and support such as consumer-side infrastructure is still in place, which is expected to limit the falling space of Shanghai zinc.

[minutes of SMM Morning meeting] Macro-sentiment drags down the price of zinc and there is still resilience in Shanghai zinc market.

On the black side, the thread rose slightly, the hot coil rose nearly 0.5%, stainless steel was flat, coke rose nearly 0.3%, coking coal rose nearly 1%, iron ore fell nearly 0.8%. In terms of hot rolls, the mainstream market resources are expected to arrive at 184000 tons this week, 87000 tons less than last week and-32% month-on-month. According to SMM, although the production of hot coils in steel mills is still increasing recently, due to the closure of the southward passage of northern wood, the arrival of resources in the north has gradually decreased, and there has been a significant reduction in the arrival of goods in the southern market this week. However, with regard to the current mentality of businessmen taking the initiative to go to the warehouse and terminal replenishment is not as expected, even if the volume of arrival is reduced in the short term, it is difficult for spot prices to rebound substantially.

[minutes of SMM Steel Morning meeting] it is difficult for prices to rebound sharply when replenishing stocks before the festival is less than expected.

The previous period of crude oil fell nearly 1.6%, and US oil closed slightly higher on Tuesday. The previous day's surge in the number of new cases of overseas COVID-19 triggered a slight rebound in the sell-off, focusing on weekly crude oil inventory data in the United States. Analysts said a new round of European blockade restrictions would have a limited impact on fuel demand, which could prevent a massive sell-off in the oil market. As major oil producers continue to restrict supply, market trading is stuck in ranges for most of the summer.

In terms of precious metals, Shanghai gold fell nearly 0.1%, while Shanghai silver fell nearly 3.2%. Comex futures closed down for the second trading day in a row on Tuesday, as the dollar continued to rise after restrictions were imposed in London and other parts of Europe due to a surge in the number of new cases. The increase in COVID-19 infections in Europe and the United States has raised investor doubts about the global economic recovery, prompting investors to flee to the dollar, putting pressure on gold. European countries, including France, Spain and Britain, are grappling with rising cases of novel coronavirus, with the British prime minister introducing new restrictions to curb the spread of the virus, such as imposing a curfew on restaurants and restaurants in England after 10:00. 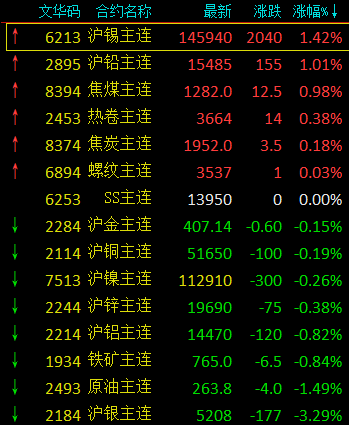