SMM9 March 22: yesterday, the outer disk metal fell across the board. The dollar index surged to a six-week high on Monday, and the three major indexes of US stocks also closed down collectively. Recently, international risk events have broken out, and the sharp strengthening of the US dollar has made non-ferrous metals under pressure. Today, the LME metal market rose and fell mutually. As of about 09:30 in the morning, Lun copper rose nearly 0.5%, Lunni rose nearly 0.2%, Lunxi rose nearly 0.1%, and Lunn lead was flat. Lun aluminum fell nearly 0.1%. In the morning, most of the domestic non-ferrous metals fell, and Shanghai nickel and Shanghai zinc led the decline, both falling nearly 2%, but the decline was slightly smaller than the night market, Shanghai copper also fell more than 1%, Shanghai aluminum fell nearly 0.3%, Shanghai tin was faintly red, and Shanghai lead rose nearly 0.7%.

Overnight lead negative, guard against the impact of the rebound of the dollar on lead prices. Overnight, the trend of lead in Shanghai closely follows the decline of Lun lead, and it is expected that the domestic lead price will fluctuate in the short term. SMM1# lead prices are expected to be flat or down 50 yuan / ton today.

In terms of zinc in Shanghai, under the background of overnight macro pessimism, crude oil has plummeted, non-ferrous general fell, and social inventory is still low, superimposed on the eve of National Day, zinc prices are low downstream replenishment demand is strong, downstream consumption support is still strong, it is recommended that the pullback to do more.

In terms of black series, threads fell nearly 0.3%, hot rolls nearly 0.7%, stainless steel nearly 1.1%, coke nearly 0.3%, coking coal drops nearly 0.1%, iron ore nearly 1.9%. In terms of threads, the screw fell sharply yesterday and closed down 1.59% to 3539 in late trading. Market confidence was further defeated, the bearish sentiment of merchants continued to spread, spot prices fell 20-40 yuan / ton, and the trading atmosphere was deserted. There are few deals. In terms of hot volumes, affected by the macro negative over the weekend, the director's hot volumes fell sharply, and the spot market quotations were followed by a reduction of 10-30 yuan / ton. after the price adjustment, the market transaction was deserted, the mentality of traders was general, and they cut prices in order to ship goods one after another. the current market mood is more cautious, and the tendency of traders and terminal restocking is poor.

Crude oil fell nearly 4 per cent in the previous period, while US oil tumbled on Monday as an increase in new cases raised concerns about global demand and fears of oversupply that could resume production in Libya. In addition, crude oil followed risk aversion in stock markets and other commodity markets on Monday as rising new cases in Europe and other countries prompted authorities to impose new restrictions and cast doubt on the economic recovery.

In terms of precious metals, Shanghai gold fell nearly 2.4%, while Shanghai silver fell nearly 9%. Comex futures closed down nearly 3% on Monday, as uncertainty about more fiscal stimulus from the United States triggered a broader market sell-off and a stronger dollar, putting pressure on the precious metals market. Analysts said the sell-off in global stock markets exacerbated negative sentiment, in part because of concerns about the rise in COVID-19 cases and the possibility of renewed restrictions on economic activity, as well as uncertainty about a new round of government rescue measures. 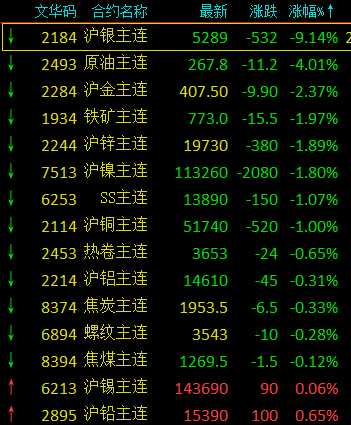