SMM9 March 21: today, most of the domestic non-ferrous metals market is red. By the end of the day, Shanghai lead rose 1.99%, Shanghai tin rose 1.87%, Shanghai aluminum rose 0.58%, Shanghai copper rose 0.33%, Shanghai zinc rose 0.07%, Shanghai nickel fell 1.99%. In terms of nickel, today, Shanghai nickel opened low and dived in the afternoon, the decline quickly expanded to more than 2%, and the futures price has fallen to a low of more than a month. SMM believes that recent nickel prices fluctuate mainly with macro factors, and the market releases the power of adjustment after a wave of weak market in the early days of the US dollar. in addition, many short-term factors are apparent in terms of fundamentals. in addition to the positive rising prices of nickel mines, there are also negative effects of stainless steel prices peaking to make nickel prices under pressure. therefore, although nickel prices do not have a long-term sharp downward trend, they are also relatively lack of power to pick up in the short term. It is estimated that this week, Shanghai nickel is 114000-120000 yuan / ton, Lunni is 14800-15400 US dollars / ton.

[SMM Analysis] Nickel diving in Shanghai fell by more than 2%, but it was supported by a rise in the price of nickel ore in the short term!

In terms of copper, today, Shanghai copper opened higher and walked back some of the gains in night trading, mainly dragged down by the fall in oil prices. Us and cloth oil fell significantly today, superimposed by the fact that the 1-year and 5-year LPR announced by the people's Bank of China today were the same as the previous period, investors' risk aversion has rebounded, and copper prices have been limited to a certain extent. Today, Shanghai copper closed, KDJ curve cross upward, the bottom is supported by multiple moving averages, copper price callback space is limited. Wait for the outer disk guidance at night to test whether Shanghai Copper can gain momentum again.

In terms of lead, Shanghai lead recorded Erlianyang, KDJ index further upward exposure, k line entity stood above the BBI index, the technical side showed a more trend, but the top hit the 20-day and 60-day moving average, the pressure is heavy, coupled with the fundamentals downstream consumption is flat, lead price upward force is insufficient, it is expected that in the short term Shanghai lead will still be mainly shock adjustment, night attention to whether Shanghai lead continues to launch an impact to the 15400 yuan / ton pressure level.

[brief Review of lead in SMM period] Shanghai lead reported that Erlianyang paid attention to the 15400 pressure level at night.

In terms of black series, thread fell 1.59%, hot coil fell 1.37%, stainless steel fell 0.32%, coke fell 0.97%, coking coal was flat, iron ore fell 2.88%. Today, the expected "Jinjiu" has not appeared for a long time, iron ore and spiral volume have gone down all the way this month. Today, ferrous metals fell sharply again, the main contract for iron ore fell 2.88%, the main thread fell 1.59%, and the hot coil fell 1.37%. Futures prices are at their lowest level in the last two months or so. The market as a whole believes that terminal demand is lower than expected, the growth rate of real estate and infrastructure investment is limited, overdraft peak season expectations and other factors lead to the black peak season is not prosperous.

Last period crude oil rose 0.73%. According to news, Libyan national oil company (NOC) announced on Saturday that it would allow its safe oilfields and ports to reopen and lift force majeure. Workers in the country's main Sharara field have returned to work after NOC announced a partial lifting of force majeure, meaning the country's crude oil production is expected to pick up. In addition, the situation in the Middle East became the focus again, with the US government unilaterally saying on Saturday that it had resumed UN sanctions on Iran, followed by a cabinet meeting held by Iranian President Rouhani and a speech saying that if the United States takes any bullying or other actions, it is bound to face a decisive response from Iran.

In terms of precious metals, Shanghai gold rose 0.45%, Shanghai silver fell 0.48%, and international spot gold prices weakened again as the dollar index rebounded after hitting a week-and-a-half low, although investors are waiting for several Fed officials to speak this week. Look for further clues about the Fed's view on inflation. Analysts pointed out that the outside world will focus on how much Powell will influence the Senate and urge it to provide more stimulus measures. More stimulus measures in the United States could lead to a weaker dollar, which is good for gold. 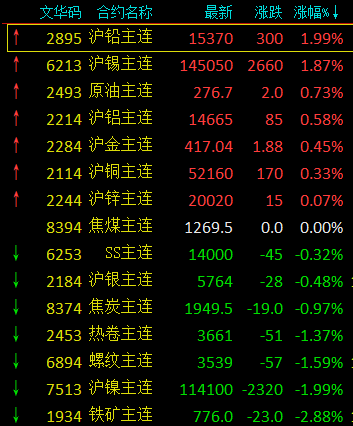 Throughout the day, the domestic commodity market showed a net inflow of capital. The Mandarin Commodity Index gained nearly 300000 hands to increase its position, with an inflow of 387 million yuan. The oil chain was pulled up across the board, with 1.159 billion funds in popularity, of which soybean oil received 528 million capital, ranking first among commodities, with an increase of 30900 hands. The black department continued to adjust and encountered 686 million yuan of funds abandoned. The Shanghai Bank experienced an adjustment and suffered a 406 million reduction in capital holdings. 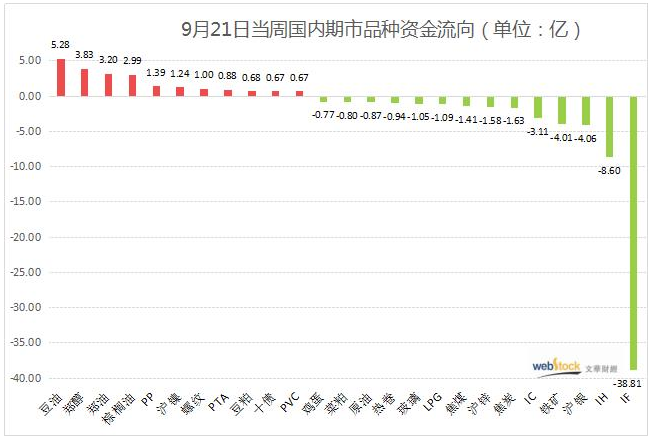