SMM9 March 18: today, the domestic non-ferrous metals market is all red. By the end of daytime trading, Shanghai lead rose 1.94%, Shanghai zinc rose 1.86%, Shanghai copper rose 1.61%, Shanghai aluminum rose 0.83%, Shanghai tin rose 0.31%, and Shanghai nickel rose 0.03%. In terms of lead, it is understood that the terminal consumption of lead battery market has not changed much for the time being, while the lead potential has weakened, some brands have reduced prices, dealers tend to be cautious in purchasing, and the enthusiasm of eliminating storage has increased. For example, the order performance of electric bicycle battery enterprises is general (replacement plate), and some enterprises have begun to reduce production; During the period, the matching order of the automobile battery mainframe factory is OK, and the production of large enterprises is close to full load, which is offset by the increase or decrease between the two, and the operating rate this week has changed very little compared with last week.

[SMM survey] the operating rate of lead-acid battery consumption is only slightly lower in half a week.

Aluminum, today's Shanghai aluminum trend is strong, the daily line closed in Zhongyang, back above the moving average. The total amount of aluminum warehouse orders decreased by 3246 tons to 134931 tons, mainly in Shanghai; the total position of aluminum options decreased by 6 to 13446 lots, with a single contract up to 629 lots; and the total position of Shanghai Aluminum increased by 8789 lots, with several contracts increasing their positions in recent months. Low inventory and high basis support Shanghai Aluminum, intra-day capital inflows actively increase positions to push up, aluminum futures continue to upward need a higher degree of capital participation.

[brief Review of SMM Aluminum] bullish positions push up the inflow of Shanghai aluminum funds for the second day in a row.

In terms of lead, Shanghai lead recorded Changyang line, the top close touched the BBI curve, KDJ indicators once again upward exposure, technical indicators have more idle trend. However, considering that there are not many bright spots on the consumer side to support lead prices to continue to rise, while the cost support for recycled lead below is still stable, Shanghai lead is expected to maintain a volatile market in the short term.

[brief Review of lead in SMM period] the strong rise of lead in Shanghai maintains a volatile market in the short term.

In terms of black, thread rose 0.64%, hot coil rose 0.98%, stainless steel rose 0.57%, coke rose 2.47%, coking coal rose 1.63%, iron ore rose 1.58%, hot rolling supply rose again this week, the spot market was subject to the continued decline of volume volume, trading slump, terminal procurement mood is relatively low, resulting in the accumulation of total inventory this week. Generally speaking, the spot aspect, the current hot volume supply maintains the high level, but the gold nine has arrived, the demand does not show the obvious explosive power. In terms of futures, black has experienced a strong rise for as long as 5 months, the market confidence is obviously insufficient, and the cost side and the finished end have fallen in coordination. After the release of bearish sentiment in the short term, the volume may enter a weak consolidation stage, and the wait-and-see terminal demand in the early stage is expected to be released after the volume stabilizes, at the same time, approaching National Day short holiday, most traders and steel mills tend to use the opportunity of terminal replenishment before the festival to reduce inventory, so inventory growth is expected to slow down in the short term.

The last period of crude oil rose 2.32%, reaching a two-week high. OPEC's compensation cut for cheating countries has been extended to December, and OPEC remains committed to cutting production altogether, while Prince Abdulaziz, Saudi energy minister, warned traders on Thursday not to make big bets in the oil market, saying he would try to make the market "unpredictable" and promised that oil speculators would be hurt "like yu".

In terms of precious metals, Shanghai gold fell 0.07% and Shanghai silver fell 0.03%. In the Fed's decision this week, Powell hinted that although the economic recovery is faster than expected, there are signs that the recovery is slowing. With the U.S. economic recovery still faltering, analysts believe that even if the Fed does not continue to expand its stimulus, but given the employment target and adjusted inflation expectations, this could mean that the Fed will keep interest rates low for longer. 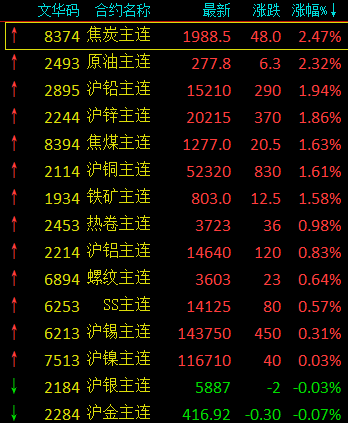 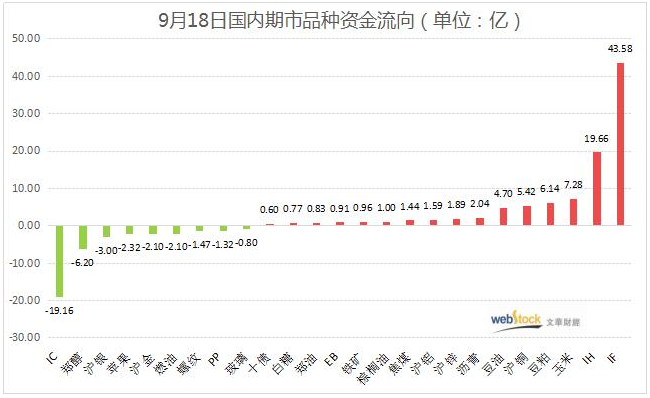