SMM9 March 17: today, the domestic metal market is all green. By the end of the day, Shanghai nickel fell 2.16%, Shanghai tin fell 1.77%, Shanghai zinc fell 1.25%, Shanghai lead fell 1.03%, Shanghai copper fell 0.93%, and Shanghai aluminum fell 0.28%. In terms of lead in Shanghai, from a fundamental point of view, the production of primary lead is stable. On the consumer side, battery consumption is relatively light. At present, lead battery enterprises mainly purchase on demand, and the National Day reserve is not as expected. According to SMM, large battery factories basically complete the inventory, and it is difficult for consumers to provide upward power for lead prices. Overall, the lower part of lead is supported by the cost of recycled lead, while the lack of bright spots on the consumer side shows a lack of upward power. It is expected that short-term lead prices will remain volatile, and the impact of the new solid waste law on the production of recycled lead should be paid attention to in the follow-up.

[SMM analysis] is it difficult to break through the tight encirclement around Shanghai lead Wanwu?

In terms of copper, today, Shanghai copper negative, the upper pressure of multiple moving averages, KDJ curve cross shows a downward trend. In the evening, watch the Bank of England announce interest rate decisions and monetary policy meetings to test whether Shanghai Copper can once again stand on the 40-day moving average.

[brief Review of SMM Copper] Dollar Index continues to rise, Shanghai Copper is under pressure Down

In terms of lead, in terms of fundamentals, according to SMM research, most of the large battery factories have completed the National Day reserve, and there is no bright spot at the consumer end to drive Shanghai lead up, while the price of waste batteries is easy to rise and difficult to fall to give certain support to lead prices. Shanghai lead is expected to maintain a volatile market in the short term, and Shanghai lead may further test the support of 14800 yuan / ton of Brin downrail at night.

[SMM hot volume] the pace of replenishment before the festival is approaching, and inventory growth is expected to slow down.

Last period crude oil rose 1.16%, US EIA crude oil inventory fell more than expected, coupled with Hurricane "Sally" forced a large number of offshore oil production in the United States to stop production, the main reason for the decline in crude oil inventory is an unexpected sharp increase in US refinery activity, mainly in the Gulf of Mexico, but the supply is also negative on both sides. On the one hand, OPEC will not talk about the need for further production cuts, on the other hand, analysts say that if Biden wins the US election, About 1 million barrels per day of Iranian oil export capacity will flood the international market.

In terms of precious metals, Shanghai gold fell 0.57%, Shanghai silver fell 2.11%, and international spot gold prices fell as the Federal Reserve was bullish on the prospect of economic recovery but gave no specific hints of further stimulus measures, the dollar index rose to a more than one-week high of 93.614. It seems disappointing that the Fed did not buy more long-term bonds as the market had hoped. The market had hoped that the Fed would be ready to extend its bond purchases or increase asset purchases more broadly to keep long-term bond yields low and avoid a correction in the stock market. In terms of the flow of funds, the oil chain unexpectedly attracts countless money. together, the three major varieties will receive more than 1.2 billion of the funds in the bag, methanol futures hot money flows in and out, and today they absorb 608 million more. The Federal Reserve issued a loose "bad check", and 748 million of the funds supported the Shanghai silver slump. The black chain index was abandoned by funds, iron ore continued to fall, and more than 400 million funds left the market. 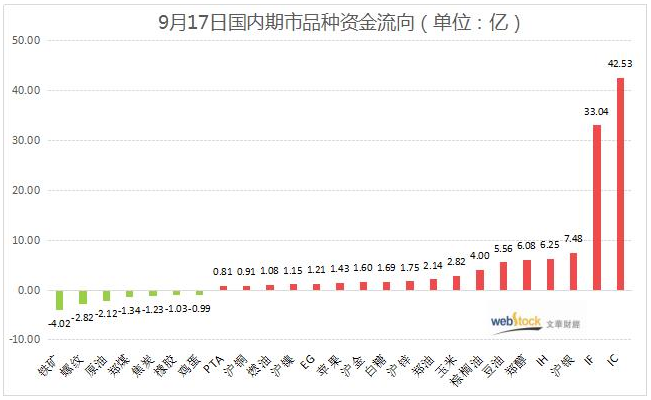