SMM9 March 17: this morning, the domestic metal market was all green. By midday, Shanghai nickel fell 2.06%, Shanghai lead fell 1.16%, Shanghai tin fell 0.98%, Shanghai copper fell 0.87%, Shanghai zinc fell 0.48%, Shanghai aluminum fell 0.28%, nickel, SMM believes that spot fundamentals fluctuate less, a small amount of purchases are made downstream on demand, and the fundamental focus is still focused on nickel ore-nickel iron-stainless steel industry lines. The price of nickel ore has risen all the way in the case of a considerable shortage of supply, the high price of Ferro nickel has been supported by raw material support and tight supply, and the mentality of high production in stainless steel plants has not been significantly reduced for the time being, and this production line still has a strong support for nickel price. however, at present, the fluctuation of macro factors has a more obvious disturbance to the nickel price in the short term.

In terms of copper, the dollar index rose again after the overnight Fed meeting, and the basic metals were generally green today. Shanghai copper fell to a pressure of 51500 yuan / ton in a narrow range of 51350-51450 yuan / ton, and the spot market performance remained the same. the flat copper quotation starts with rising water 60 yuan / ton. the mainstream transaction is 50-60 yuan / ton, so it is difficult to have room to lower the price.

The spot market of SMM copper in Shanghai on September 17th KuaiBao: the market pulls back and rises the water in a dilemma between supply and demand.

In terms of black, thread rose 0.03%, hot coil fell 0.32%, stainless steel fell 1.1%, coke fell 0.56%, coking coal rose 0.36%, and iron ore fell 3.14%. This week, a number of economic data were released centrally, causing sharp fluctuations in the market, although the growth rate of investment data was OK, but the area of new housing construction decreased by 3.6%, and the land purchase area of real estate development enterprises decreased by 2.4% compared with the same period last year. The rate of decline is 1.4 percentage points higher than that in January-July. Combined with the central policy tone of "housing speculation" and recent measures to tighten real estate policies, the expectation of real estate demand has weakened in the later period, leading to a sharp decline in the market. However, demand is still there in the short-term peak season, and cement prices in major areas are still strong. According to the statistics of the Hong Kong Federation of passengers, the average daily retail sales in the second week of September were 43000, an increase of 39% over the same period last year and 6% month-on-month, indicating that there is still some support on the demand side. Therefore, the downward trend of the market may not be smooth, and there may be momentum for a rebound in the short term.

Crude oil rose 1.12% in the previous period, while U.S. oil fell on Thursday as concerns about weak fuel demand reignited after Hurricane Sally swept across the Gulf of Mexico into the southeastern United States. Distillate stocks rose 3.5 million barrels last week, nearly six times what analysts had expected, according to (EIA) data from the U.S. Energy Information Administration on Wednesday.

In terms of precious metals, Shanghai gold fell 0.83% and Shanghai silver fell 2.18%. In the early hours of this morning, the Fed kept interest rates unchanged as expected, implying that they would remain at current levels until the end of 2023. However, the Fed raised its economic forecast, and on the other hand, Powell did not promise further stimulus, so the Fed actually gave a loose "bad check". The market believes that there are too many variables in the next three years, assuming that later inflation rises and the economy improves faster than expected, we do not rule out the possibility that the market will eventually "force" the Fed to raise interest rates in advance.

By the close of noon, the contracts in the metals and crude oil markets were as follows: 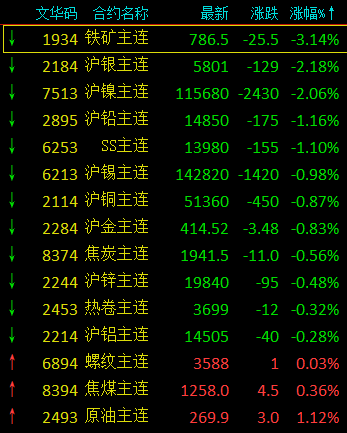