In terms of lead, the overnight lead correction closed down, and it is expected that the international lead price is still weak and rising in the short term. Shanghai lead opened high and moved low at night, exploring a high of 15200 yuan / ton but not stable, downstream demand is improving, but the efforts to boost lead prices are not strong, pay attention to the monthly change of the main lead contracts in Shanghai, and guard against the risk of short-term pullback in the trend of lead price shocks.

On the zinc side, the overnight dollar weakness superimposed on the Fed's dovish signal that low interest rates will remain low for three years to support the price of zinc. In terms of Shanghai zinc, under the background of macro-monetary easing, downstream domestic consumption remained stable, overseas orders for electronics, hardware and tires warmed up slightly, and fundamental support was temporarily strong.

Tin, Shanghai tin fell significantly this morning, the mainstream spot price is expected to be 142000-144000 yuan / ton. Spot market small-brand smelters had a lot of standing prices yesterday, and yesterday's prices were not much different from those of the day before yesterday, and the manufacturers' willingness to purchase downstream of prices was not high. In addition, the volume of goods in the hands of traders was less, and the overall transaction was light.

In terms of black series, threads fell by nearly 0.2%, hot rolls by nearly 0.7%, stainless steel by nearly 0.7%, coke by nearly 0.8%, coking coal by nearly 0.2%, iron ore by nearly 2.8%, and threads by nearly 2.8%. Around June this year, the snail rose step by step under the strong promotion of iron ore, but the spot market was stuck in the "Meiyu + flood" swamp, the shipment was not smooth, and the price rose slowly with the snail. The rapid narrowing of the base has attracted a large number of current companies to participate in the torrent of "gold" due to maturity, resulting in an increase in Hangzhou rebar "zombie inventory". And then from June to August, the basis has not been expanded, or even continued to narrow, a large number of cash resources trapped in the warehouse has always been a "heart" in the spot market in Hangzhou.

Crude oil rose nearly 2 per cent in the previous period, while US oil surged more than 4 per cent on Wednesday as US crude and gasoline stocks fell and Hurricane Sally forced a large number of offshore oil production to shut down. Us crude oil stocks fell 4.4 million barrels last week to 496 million barrels, the lowest since April, according to a report from the US Energy Information Administration ((EIA)). In the survey, analysts expect an increase of 1.3 million barrels. Us gasoline inventories fell by 400000 barrels, more than twice as much as analysts had expected, while capacity utilisation rose 4 percentage points, EIA said.

In terms of precious metals, Shanghai gold fell nearly 0.2%, while Shanghai silver fell nearly 0.4%. Comex gold futures closed higher for the third day in a row on Wednesday, continuing to rise after the Federal Reserve / FED policy decision. The Fed kept interest rates near zero on Wednesday and promised to keep them unchanged until inflation was on a track that moderately exceeded the Fed's 2 per cent target "for a period of time". 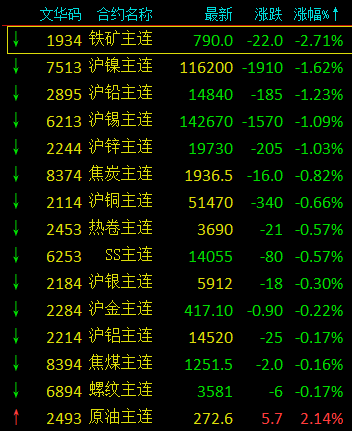