In terms of copper, on Friday, the central bank released financial data such as the increase in social financing in August and the amount of new RMB loans that exceeded market expectations. The continued abundance of liquidity provided the impetus for the economic recovery, and the style of continued loosening of funds remained unchanged, helping to keep the price of copper high. In addition, recently, Sino-US and Sino-Indian relations have become increasingly tense, and the expansion of geopolitical risks has increased market concerns, suppressing the rise in copper prices to some extent, and copper prices are expected to remain volatile in the short term.

In terms of lead, the overnight lead correction closed down, and it is expected that the international lead price is still weak and rising in the short term. Shanghai lead opened high and moved low at night, exploring a high of 15200 yuan / ton but not stable, downstream demand is improving, but the efforts to boost lead prices are not strong, pay attention to the monthly change of the main lead contracts in Shanghai, and guard against the risk of short-term pullback in the trend of lead price shocks.

Zinc, boosted overnight by the US vaccine good news and a new round of fiscal stimulus package, superimposed by the Fed will take a dovish monetary policy stance expected to support the upside of Lun Zinc. In terms of zinc in Shanghai, under the background of the peak consumption season, the weak operation of the US dollar superimposed domestic economic data to support the price of zinc. Pay attention to the development trend of international geopolitics in the short term.

Tin, tin prices have not changed much, yesterday continued the light atmosphere of the day before yesterday, downstream willingness to receive goods is not high, adult Shanghai tin market trading atmosphere is light. Tin night trading in Shanghai rose but gave up the increase in the morning, and the mainstream spot trading price is expected to be 144000-146000 yuan / ton today.

In terms of black series, threads fell by nearly 1.2%, hot rolls by nearly 1%, stainless steel by nearly 2.8%, coke by nearly 1.9%, coking coal by nearly 0.2%, iron ore by nearly 1.7%, and threads, as the data of the Bureau of Statistics fell below market expectations for the "peak season"-while output of crude steel and steel continued to grow, the year-on-year growth rate of real estate and fixed investment was still negative, and the expected "Bubble" was punctured. The snail immediately dived "demonstration", the spot market then fell, the mainstream market fell 10-30 yuan / ton, the trading atmosphere was deserted, and the panic suppressed a few days ago began to spread again.

"A brief comment on the spot Thread on September 15: the macro data is lower than expected, and the spot screw diving falls back."

Crude oil rose nearly 2.7% in the previous period, and although the (IEA) of the International Energy Agency continuously lowered its global oil demand forecast, international oil prices rebounded significantly overnight and continued to be affected by hurricane factors. SC crude followed the rise, maintaining a rise of nearly 3 per cent at the start of the session. As of Tuesday, hurricane Sully shut down about 27 percent, or 497072 barrels a day, of oil production in the northern gulf of Mexico. Weekly crude oil production in the United States has fallen significantly since August. Us oil rose more than 2 per cent on Tuesday, supported by supply disruptions caused by hurricanes in the US, but demand concerns lingered as energy industry forecasters expected a slower-than-expected recovery from the COVID-19 epidemic.

In terms of precious metals, Shanghai gold fell nearly 0.6%, while Shanghai silver fell nearly 0.5%. Comex gold futures rose on Tuesday, hitting a two-week high on hopes that the Fed would take a dovish monetary policy stance to rein in the dollar. The dollar index rose, making gold more expensive for investors holding other currencies. Analysts point out that the dollar has rebounded from its lows and we have seen some sell-off in gold, but this is temporary, with dovish comments from the Fed meeting and further explanation of its new inflation target could push gold above $2000. 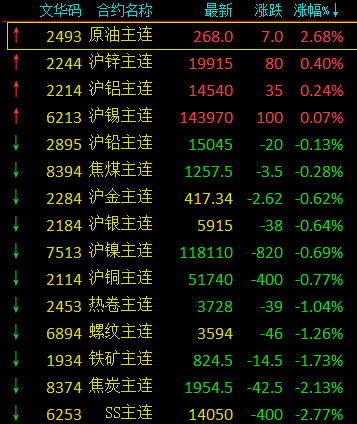