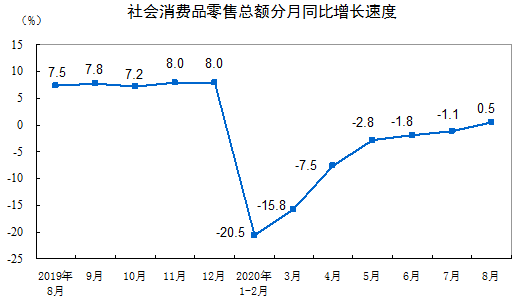 The total retail sales of consumer goods in 2019 has been revised according to the results of the fourth national economic census, and the monthly growth rate in 2020 is calculated according to a comparable caliber.

Total retail sales of consumer goods: refers to the amount of physical goods that enterprises (units) sell to individuals and social groups for non-production and non-business use through transactions, as well as the amount of income obtained from the provision of catering services.

According to the results of the automatic correction of the seasonal adjustment model, the month-on-month growth rate of total retail sales of consumer goods since August 2019 is revised. The revised results and month-on-month figures for August 2020 are as follows: