In terms of lead, overnight lead received two consecutive positive results, and it is expected that the international lead price will pick up in the short term. Night trading Shanghai lead with Shenglun lead, bullish station on the 15000 yuan / ton platform, downstream pre-festival procurement positive sentiment boost lead prices, is expected to pick up the trend of short-term fluctuations.

[SMM lead Internal Morning meeting record] the raw materials of recycled lead on the Wanwu platform of Shanghai lead Station are getting tighter.

Zinc, overnight non-ferrous rose, the dollar weakened, US bond yields fell, superimposed vaccine good news boosted market optimism, but international geopolitical risks are still expected to limit the upside. In terms of Shanghai zinc, in terms of fundamentals, social inventory continues to be removed during the peak consumption season. at present, the arrival of imported zinc has increased, and the output of the smelter has also increased month-on-month, but the decline in the previous price has led to an increase in the proportion of downstream restocking and superimposed refinery direct hair downstream, resulting in a decline in inventory and a strong support for zinc prices due to the contradiction between supply and demand.

[minutes of SMM Morning meeting] overnight spot prices of zinc ingots rose and downstream buyers were in a wait-and-see mood.

On the black side, the thread rose slightly, the hot coil fell nearly 0.3%, stainless steel rose nearly 0.7%, coke rose nearly 1.3%, coking coal rose nearly 0.7%, and iron ore fell nearly 0.2%. In terms of hot rolling, according to SMM statistics, since the end of August, the price gap between hot and cold markets in eastern and southern China has soared to more than 800yuan / ton. According to SMM, the sharp expansion of the price gap is mainly due to the mismatch between supply and demand. In the past few months, the terminal demand of cold system continued to be sluggish, and the price of cold system products was suppressed to a certain extent. At that time, the hot-rolled spot market was excited and prices continued to rise, resulting in a narrow price gap between hot and cold prices. Driven by high profits in hot rolling production, steel mills are also more inclined to produce hot-rolled commercial materials and appropriately reduce the production of cold products. In the case of small profit margin, the production enthusiasm of the rolling mill is not high, which generally leads to the low supply of cold rolling.

"[SMM hot roll] the cold roll is gone! The price difference between hot and cold has reached a new high in nearly 3 years.

Crude oil fell slightly in the previous period, while international crude oil futures fell slightly on Monday, dragged down by concerns about a stalled global economic recovery and Libya's readiness to resume production, and failed to gain support from a coming storm that disrupted US production. The OPEC+ alliance of OPEC and its allies will meet on Sept. 17 to discuss the implementation of the production reduction agreement, and analysts do not expect further production cuts.

In terms of precious metals, Shanghai gold rose nearly 0.1%, while Shanghai silver rose nearly 0.8%. Comex gold futures rose 1% on Monday, as the dollar weakened and expectations that the US Federal Reserve (FED/ Fed) would maintain its dovish monetary policy this week further enhanced the attractiveness of safe-haven gold. Analysts say gold prices are rising because of considerable pressure on the dollar. We have also seen Finance Minister Nuchin hinting that they want some form of fiscal stimulus deal, which will further weaken the dollar. 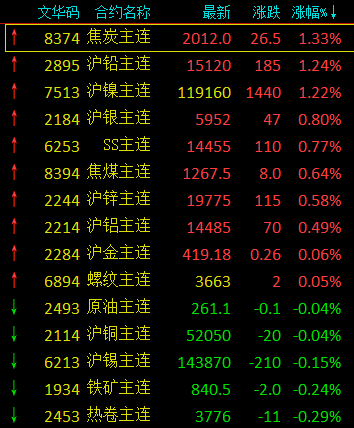