SMM9 March 14: metals generally rose last Friday, of which Shanghai zinc rose a lot. SMM believes that ten peak seasons of gold, silver and silver can be expected, and it is expected that consumption in the peak season in September will still drive to the treasury, producing strong support for zinc prices, but the sharp increase in refinery production will also suppress the sentiment of the market to be long. That is, for zinc, zinc may present a fluctuating market within the range. In early trading today, the domestic side continued to be popular across the board, with Shanghai zinc up nearly 2.3%, Shanghai nickel up nearly 1.9%, Shanghai tin up nearly 1.3%, Shanghai copper up nearly 0.9%, Shanghai aluminum and Shanghai lead up nearly 0.2%. There are ups and downs in the LME metal market. As of 09:50, Lun Copper is up nearly 0.5%, Lun Nickel is up nearly 0.4%, Lun Aluminum is up nearly 0.3%, Lun Xi is flat, Lun Zinc is down nearly 0.1%, and Lun lead is down nearly 0.2%.

In terms of copper, on Friday, the central bank released financial data such as the increase in social financing in August and the amount of new RMB loans that exceeded market expectations. The continued abundance of liquidity provided the impetus for the economic recovery, and the style of continued loosening of funds remained unchanged, helping to keep the price of copper high. In addition, recently, Sino-US and Sino-Indian relations have become increasingly tense, and the expansion of geopolitical risks has increased market concerns, suppressing the rise in copper prices to some extent, and copper prices are expected to remain volatile in the short term.

In terms of Shanghai Aluminum, the new production of electrolytic aluminum will resume production steadily by the end of this year, and the supply side is expected to rise slightly; although the peak season effect on the demand side is not obvious, it still shows a slow recovery trend, feedback to the limited increase in inventory performance, and it is expected that the fundamental support strength below Shanghai Aluminum in the short term will still exist. Need to continue to pay attention to the liquidity of the spot market and the mood changes after the long short change.

In terms of nickel, macro factors triggered market panic, affecting not only safe-haven assets such as gold and silver, but also basic metals. From a fundamental point of view, the peak of stainless steel prices and increased profit pressure are the factors restricting the upward price of nickel, but it is not the decisive factor in the near future. the spot price of nickel is strong, and nickel pig iron has little room to fall. The gap between supply and demand of primary nickel in the third quarter still exists, so the decline in nickel price or not a long-term trend can be expected to be moderately repaired. It is expected that the recent nickel price will fluctuate in a wide range near the current low.

[minutes of SMM Morning meeting] the price of high nickel pig iron has been suppressed and the price of stainless steel has also fallen slightly.

In terms of black, thread rose by nearly 0.6%, hot coil by nearly 1.1%, stainless steel by nearly 1.3%, iron ore by nearly 1.8%, coke by nearly 1%, and coking coal by nearly 0.3%. In terms of hot coil, the supply side, hot coil production remains high, and the subsequent supply pressure will continue to intensify. On the demand side, the demand suppressed by the recent panic will be gradually released. The fundamentals have not changed much for the time being, and the situation of both supply and demand is high. On the emotional side, panic has been released to a certain extent this week and is expected to pick up next week, driven by a technical rebound in the market. In the near term, spot prices are expected to show an upward trend next week, but under the pressure that terminal demand has not yet been fully released. It is expected that the upward space is limited.

[SMM internal morning meeting view] spot fundamentals are still supported, and there is a probability of rebound after a sharp fall.

The previous period of crude oil fell nearly 0.5%, and crude oil prices fell for the first time in a row for the first time since the April crash, as the summer driving peak ended and there were concerns about OPEC's compliance with the production reduction agreement. New York crude oil futures rose slightly on Friday, but fell 6.1% in a week, in line with the decline of the US stock market.

In terms of precious metals, Shanghai gold fell nearly 0.4%, Shanghai silver fell nearly 0.7%, and spot gold fell slightly to close at $1940.55 an ounce on Friday, as neither the European Central Bank nor the US government offered further stimulus measures. however, due to concerns about the economic recovery, safe-haven gold recorded weekly gains due to global stock market turmoil this week. 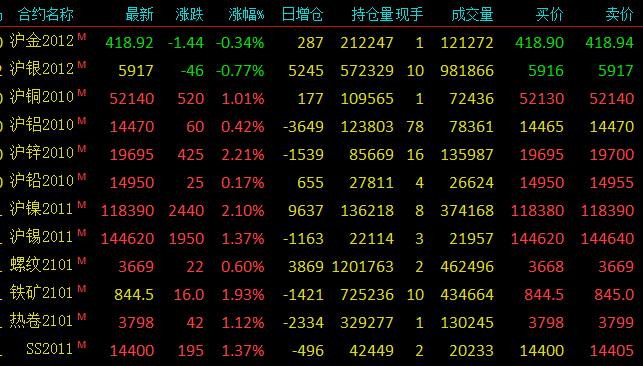