SMM9 March 10: today, all non-ferrous metals are floating green. By the end of the day, Shanghai lead fell 2.28%, Shanghai zinc fell 1.6%, Shanghai tin fell 1.01%, Shanghai nickel fell 0.8%, Shanghai copper fell 0.37%, and Shanghai aluminum fell 0.28%. In terms of nickel, macro factors triggered market panic, affecting not only safe-haven assets such as gold and silver, but also basic metals. From a fundamental point of view, the peak of stainless steel prices and increased profit pressure are the factors restricting the upward rise of nickel prices, but they are not the decisive factors in the near future. spot nickel prices are strong, and nickel pig iron has little room to fall. There is still a gap between the supply and demand of primary nickel in the third quarter, so the decline in nickel prices may not be a long-term trend. at present, macro sentiment and bears have the upper hand, making it difficult for nickel prices to rebound quickly. It is expected that the near-term nickel price in the current position near the shock consolidation is mainly, or can look forward to later repair.

In terms of copper, today's Shanghai copper gave up yesterday's gains and closed negative, KDJ opening expansion, the lower by the 20-day moving average support. In the evening, we will pay attention to the number of people in the United States who have applied for unemployment benefits in the week up to September 5 to test whether Shanghai Copper can hold the support of 51500 yuan on the Brin middle rail line.

In terms of lead, Shanghai lead closed triple negative, k line center of gravity further moved down, k line entity pressure for 5 days and 60 days average, KDJ index downward exposure expanded, technical side shows that Shanghai lead has entered the downward channel, at the same time, the fundamentals downstream consumption has not improved much, macro need to pay attention to China's August social finance data, night attention to whether bears can continue to break through the previous support of 14800 yuan / ton first line.

[brief Review of lead in SMM period] Shanghai lead fell three times in a row and focused on the first line of 14800 at night.

In terms of black, thread fell 1.6%, hot coil 1.76%, stainless steel 2.18%, coke 2%, coking coal 1.46%, iron ore 2.26%. Affected by the accident on Sept. 7, Novolipietsk Steel (NLMK), Russia's largest steelmaker, has suspended iron ore concentrate production at its Stoilensky mine. According to sources, all of NLMK Group's iron ore concentrate comes from the project, so the company's pig iron and steel production is under threat. On 7 September, the conveyor belt corridor used to transport further processed ore at the Stoilensky mine collapsed. Production of related products has been suspended, but quarrying operations are continuing. "

Crude oil fell 1.78% in the previous period, and crude oil inventories rose 2.97 million barrels to about 504.1 million barrels in the week to September 4, according to data released on Wednesday by the American Petroleum Institute ((API)), while analysts expected a decline of 1.075 million barrels. In addition, EIA cut its forecast for global crude oil demand growth by 210000 b / d to-8.32 million b / d in 2020.

In terms of precious metals, Shanghai gold rose 0.97%, Shanghai silver rose 1.69%, and the US dollar fell, and investors worried that the development of a du vaccine for coronary heart disease would be delayed, enhancing gold's safe-haven attractiveness. Analysts point out that gold prices remain bullish in the medium and long term against the backdrop of generally loose monetary policy by central banks around the world. 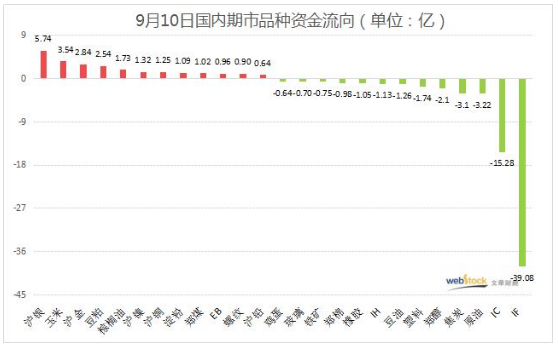