On the copper side, copper prices were also boosted by the biggest gain in nighttime WTI crude oil futures since June, as oil prices broke out of a three-month low. In terms of fundamentals, LME inventory continues to be de-stocked, copper inventory is at an all-time low, and demand growth is expected to remain, forming a certain support for copper prices to maintain high levels.

[minutes of SMM Morning meeting] WTI crude oil futures rose the most in recent months, and copper prices were also boosted by this.

In terms of lead, overnight lead received three consecutive negative, vigilant against the risk of international lead prices continuing to fall. Shanghai lead continued to fall overnight, failing to hold the 15200 yuan / ton line, paying attention to the support of downstream demand for lead prices. The price of lead in SMM1# is expected to fall by 50-100 yuan per ton today.

In terms of zinc, U. S. stocks rebounded strongly, the three major stock indexes closed higher, superimposed crude oil rose, the dollar weakened, and market panic stabilized, providing support for zinc prices. In terms of zinc in Shanghai, from a fundamental point of view, there is greater pressure on the supply side, but the infrastructure construction of the galvanized plate on the consumer side is expected to be strong, the overall order increases, the Electroweb project also falls to the ground one after another, the overall order of the die-casting zinc alloy plate is steadily rising, and the tire consumption of the zinc oxide plate is improving. On the whole, the fundamentals of zinc are good, and zinc prices fluctuate in a narrow range after the panic in the market.

[minutes of SMM Morning meeting] Zinc fundamentals tend to be positive for zinc prices fluctuate in a narrow range after panic in the market.

[SMM Analysis] the trend of steel price is weak and the operating rate of blast furnace has dropped for three weeks in a row.

Crude oil fell nearly 0.8 per cent in the previous period, and US oil recovered some of the previous session's losses on Wednesday, but the number of new cases in some countries rebounded, undermining hopes of a steady recovery in global demand. Analysts point out that when powerful Middle Eastern oil producers are willing to sell at lower prices, it is normal for global markets to panic and follow. The global health crisis continues, with an increasing number of cases in India, the United Kingdom, Spain and the United States. The outbreak could slow the global economic recovery and reduce demand for fuels from aviation fuel to diesel.

In terms of precious metals, Shanghai gold rose nearly 1.2%, while Shanghai silver rose nearly 2.5%. Comex gold futures prices rose for the second time in a row on Wednesday, as a stronger euro weighed on the dollar, boosting the attractiveness of dollar-denominated gold. Some analysts pointed out that near gold and silver prices have been under some pressure, mainly due to concerns about a slowdown in demand recovery, but mainly because of the rebound of the dollar. But as bond yields have been low, there is not much selling pressure on gold and silver. Investors still hope that an effective vaccine will be available soon and are confident that central banks and governments will be prepared to provide more stimulus and devalue their currencies anyway. Against this backdrop, gold and silver are still supported by fundamentals. 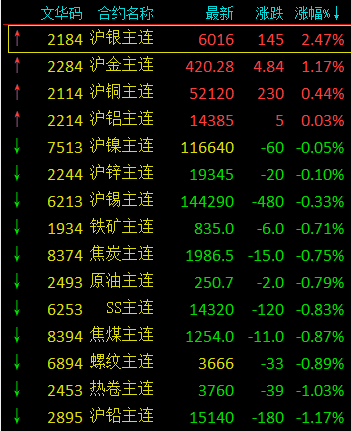