SMM9 March 8: most non-ferrous metals are red today. By the end of daytime trading, Shanghai copper rose 0.63%, Shanghai tin rose 0.59%, Shanghai aluminum and Shanghai lead rose 0.35%, Shanghai nickel rose 0.13%, Shanghai zinc fell 0.3%, aluminum, according to data, unwrought aluminum and aluminum exports rose slightly month-on-month in August, mainly because foreign demand rebounded under the dual support of stimulating the economy and strictly controlling the epidemic. Drive the increase of China's domestic aluminum export demand, but from a year-on-year point of view, by August 2020, China's unwrought aluminum and aluminum exports have been lower than last year for 14 consecutive months, and the year-on-year performance is poor, which is the result of the comprehensive effect of many factors. the impact of the epidemic, the high Hulun ratio and foreign trade friction are the main reasons. Considering that the epidemic is still spreading rapidly abroad in the medium term, the resumption of work in foreign factories and manufacturing industries is still relatively slow, and the Shanghai-to-London ratio has narrowed limited in the context of the current internal and external trend, it is expected that the export volume of unwrought aluminum and aluminum products will hardly rise significantly in September compared with the same period last year, and the high probability will remain below 450000 tons.

Black intra-day shock fell, the decline accelerated, double coke led the decline, thread fell 0.85%, hot coil fell 1.36%, stainless steel rose 0.47%, coke fell 1.87%, coking coal fell 1.79%, iron ore fell 1.63%. According to SMM research, recently, Tangshan focused on a week-long "zero point" operation from 0: 00 on September 7 to September 14, and the relevant departments are currently conducting a comprehensive inspection of Fengnan District Steel Plant. According to SMM, a total of two steel mills in Fengnan District of Tangshan City have substantially shut down the production of furnaces, involving three blast furnaces. Among them, Ruifeng stove 1 580m ³blast furnace, Donghua stove 2 680m ³blast furnace. In accordance with the requirements of the document to stop production until the end of this month, the follow-up SMM will continue to follow up the implementation in other areas.

The last period of crude oil fell 3.41%, and US oil also fell. After the long weekend of International Labour Day in the United States, demand worries heightened and depressed oil prices. International Labour Day's holiday in the United States marks the end of the peak period of the US driving season, which may lead to a drop in fuel demand. And the market is worried that COVID-19 's confirmed cases may increase after the holiday. Analysis shows that 22 of the 50 states in the United States have increased the number of cases of novel coronavirus this weekend. At the same time, cases in India and Britain are also increasing.

In terms of precious metals, Shanghai gold rose 0.17% and Shanghai silver rose 0.84%. International spot gold continued to be weighed down by the rise of the dollar in Asian trading on Tuesday, but concerns about the recovery of the global economy from the novel coronavirus epidemic limited the decline in gold prices. The rise in the dollar index has made gold less attractive to holders of non-dollar currencies. In terms of capital flow, a total of 800 million yuan flowed into the Mandarin Commodity Index. Of this amount, 2 billion yuan flowed into agricultural products and 1.2 billion yuan escaped from industrial products. Specifically, the oil chain is still the main force of gold absorption, today's 1.54 billion capital influx, soybean oil and palm oil received 848 million yuan and 376 million yuan respectively. But the black chain index suffered a 1 billion capital sell-off, raw materials suffered a serious setback, coke and iron ore futures funds outflow of 560 million and 410 million yuan. The daily limit of Apple futures was helped by 326 million funds, and Zheng Alcohol, which was one of the heyday, was sold off by 426 million funds. 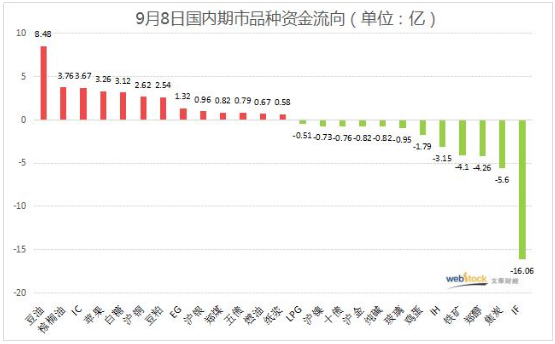