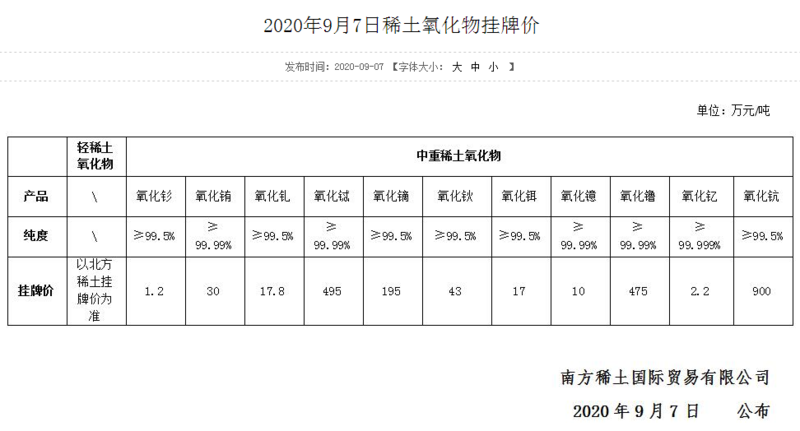 Last week, the price trend of the rare earth market as a whole was poor, the market trading was sporadic, and consumers were cautious in purchasing. The transaction prices of medium and heavy rare earths such as terbium have declined; for light rare earths, lanthanum and cerium have remained stable, and the fundamentals and trading conditions have not changed much.

Industry insiders judge that light and heavy rare earths fluctuate little in the short term, but the trend is still likely to continue to differentiate.

Yesterday, according to data released by the General Administration of Customs, China's rare earth exports totaled 1640 tons in August, down 1.36 per cent from the previous month and still falling sharply by 62.3 per cent from a year earlier. From January to August, rare earth exports totaled 24378 tons, down 25.7 percent from the same period last year. On the price side, the export price of rare earths rose significantly in August, up 79% from the same period last year.

SMM believes that July and August are the overseas summer break. In addition, under the interference of the epidemic, overseas market demand remains sluggish. According to some traders, the atmosphere of overseas inquiry orders in July is light, and correspondingly, the operating rate of domestic rare earth factories is relatively low, resulting in a sharp decrease in rare earth exports in August from the previous month, and there is no big fluctuation compared with July. From June to August this year, the price of medium and heavy rare earths in China has risen rapidly, and some merchants have cashed out their shipments at present, which has also led to a relaxation in prices in the near future. Consolidation or even a small correction under the current higher price is the adjustment of the market itself, and it is expected that the market as a whole will still be able to do so in September and October.