At present, the macro environment is conducive to the upward price of precious metals: unprecedented monetary and fiscal stimulus, huge debt, and low or even negative interest rates have all enhanced the attractiveness of gold and silver. The macro environment is conducive to the long-term bull run of gold and silver. But in the short and medium term, the atmosphere of market hype of precious metals has been watered down.

In the context of global monetary policy tends to be loose, the US dollar and real interest rates have fallen sharply. At present, with the weakening of the expectation of further monetary policy easing, the dollar and interest rate markets tend to oscillate, and silver with strong macro attributes also follows the oscillation.

At the JacksonHole meeting in August, Federal Reserve Chairman Colin Powell clearly defined the "average inflation target" and paid more attention to employment and adopted a more flexible approach. This means that we may see a "marginal easing" Fed in the next few years, but this meeting's statement of inflation is lower than expected, and the degree of dovish should be revised. "average inflation" means that the Fed will remain loose for longer in the future, even allowing inflation to exceed its long-term target of 2%. At the same time, the flexibility of full employment also ensures that the Fed will maintain a looser policy orientation in an environment of full employment and low inflation. However, the tolerance for inflation is still less than market expectations, and the resulting loose expectations should also be revised. Judging from the market reaction, after Powell's speech, the US dollar basically repaired its previous fluctuations, and US bond yields rose rapidly. 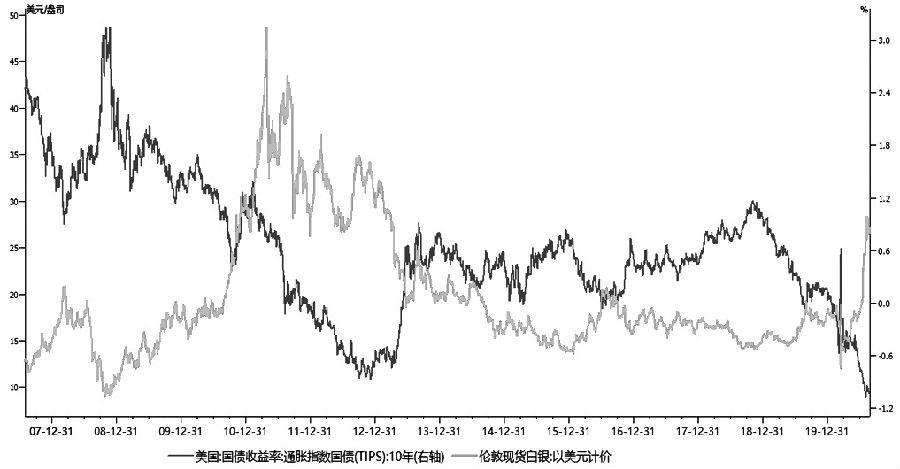 Not only may the eurozone itself have an inherent incentive to "hold down" the euro, but after a sharp fall in the dollar index, technical buying and the good state of US economic data will also push the dollar bulls to counter-attack and depress the euro. We expect the short-term dollar and real interest rates to remain volatile, and for silver, the macro bullish driving force may weaken.

B risk aversion has been watered down

Sumia Swaminathan, chief scientist of World Health Organization (WHO), said on Sept. 4 that more than 30 novel coronavirus vaccines worldwide have entered clinical trials, of which 9 novel coronavirus vaccines are in phase III clinical trials, and the situation is very optimistic. There are a large number of vaccine candidates. There is more and more good news, and the epidemic situation tends to ease on the whole. Usually, the rise in gold and silver prices is bound to be accompanied by higher volatility in US stocks, which tends to decline at present, reflecting the weakening of market tension.

In addition to the epidemic, the US election, geographical friction, Brexit, the state of economic recovery, debt deficit and other factors are affecting the rise and fall of silver prices. The 2020 presidential election in the United States will be held on November 3, but due to the epidemic, many states have chosen to start voting by mail in advance. British Prime Minister Johnson said that if no agreement is reached, Britain will be prepared to conduct Australian-style trade with the EU; if the EU reconsiders its current position, it is still possible to reach an agreement; if no agreement is reached by October 15, the two sides should accept this fact and move on; a free trade agreement with the EU needs to be reached by October 15 to enter into force by the end of the year. The market always pays attention to the progress of the above-mentioned risk events, which are basically in a quiet state at present, but as the time window approaches, it is bound to have an impact on the volatility of silver prices in the future.

From the statistical point of view of the price difference between inside and outside, domestic silver is in a state of premium at present. Price difference calculation formula: price difference = outer disk-inner disk. Outer disk accounting: fixed exchange rate 6.88, inner disk reference Tender price, no deduction of VAT. The domestic premium is mainly due to China's silver import tariff policy, and the domestic silver mining cost is higher than the international silver mining cost. With the steady growth of the domestic economy, the utilization rate of silver, as an important industrial metal, is showing an upward trend. Although China is also a major silver producer, the demand is greater than the output, so that our country imports a large amount of silver every year to fill the demand gap, and the imported silver needs to be levied 13% value-added tax.

Major central banks around the world have launched a series of easing policies, and the increase in silver ETF positions in the outer market has accelerated, reflecting the increased demand for silver from overseas investors. On the other hand, the domestic demand for silver is declining. Total domestic demand for silver will still fall 3 per cent to 29967 tons in 2020, industrial demand will fall 7 per cent year-on-year and silver jewelry sales will fall 9 per cent year-on-year, according to the China Gold Association. Since the beginning of this year, the price difference between domestic silver TD and outer silver has been pegged upside down. In the case of poor domestic demand, the price of silver on the outer disk is higher and the export window opens. Usually, the price of the outer disk is lower than that of the inner disk, and the negative range is about 200, but the current price difference of the outer disk is not only higher than that of the inner disk, but the peak is even more than + 300, as long as the export channel is smooth, it belongs to risk-free cross-market arbitrage. Considering that there are few delivery or delivery parties in the inner disk and less actual demand downstream, it is suggested that production enterprises should pay attention to the market dividend opportunities for exporting silver. 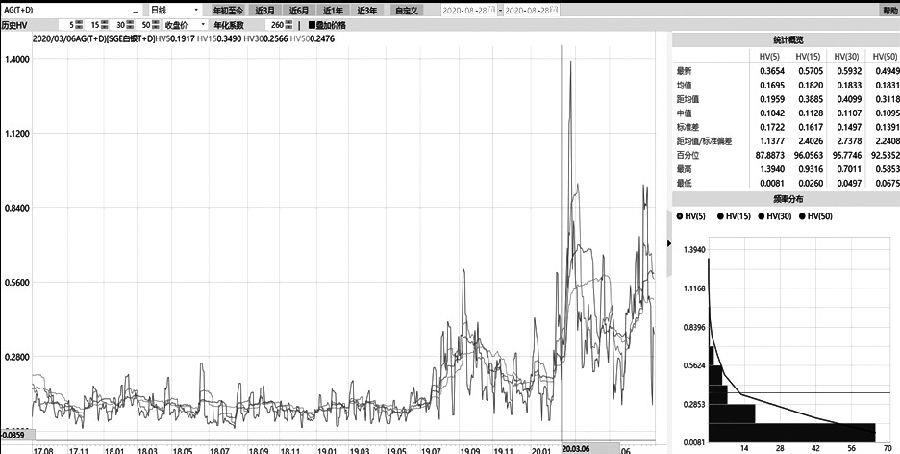 Judging from the statistical chart of silver price volatility, since the bull market of silver began in 2017, the volatility of silver price has increased by about twice as much as that of the same period in history. Real enterprises need to pay special attention to: the volatility exceeds 30%, and hedging is necessary. In the case of a sharp rise in volatility, the spread between futures and spot prices is also very volatile, and risk-free arbitrage opportunities emerge in the market.

Generally speaking, the current price spread is about 50, and the monthly price spread near delivery will gradually narrow, but the short-term current price spread not only has not narrowed, but even the price difference of more than 100 has appeared many times, and entity enterprises can buy spot and sell futures. The opportunity of cash arbitrage is worth paying attention to.

From a speculative point of view, there is usually a significant positive correlation between net excess position and silver price. According to the current CFTC position report, COMEX silver position has a further downward trend in the short term. In the short and medium term, silver prices have a certain pullback pressure.

From the perspective of the ratio of gold and silver, the price of gold and silver has returned to the average value, and silver, as a follower of gold, its rising market may come to an end. From the perspective of absolute price, although the price of gold and silver may still reach a record high in the future in a bull market, in the short and medium term, after a rapid rise in the early stage, when the marginal effect of macro factors is decreasing and the actual demand is weak, the probability of maintaining weak oscillations is greater. From a technical point of view, silver is in the form of triangular oscillation convergence, Lunyin does not exceed 28.5 Mel 29 USD / oz, and most likely will maintain the current oscillation callback trend.

CRITICAL SHORT-TERM SILVER PRICE TREND: Put into Perspective
The current silver price trend is once again at a critical juncture. It has been four years since the price of silver crossed an important trend line. However, the present setup will result in either

CST
industry news
US Fed Rate hike to weigh on Silver prices in 2015: CPM Group
According to Annual Silver Yearbook released Wednesday by the CPM Group, Silver prices are expected to consolidate during 2015 in the midst of strengthening US economy and dollar.

CST
industry news
Collections: Market Outlook for 2015 Silver Prices
In 2014, precious metals market surged in Q1, fluctuated in Q2, dropped in Q3, and struggled at lows in Q4. Which direction will silver market follow in 2015?