In terms of copper, copper prices have just risen sharply in September, and scrap traders have sold goods at high levels and pre-sold operations. traders need to actively receive and deliver orders when copper prices fall over the weekend, and the overall supply of scrap copper is less than the previous month. Scrap enterprises reflect that the transaction premium for purchasing some high-quality scrap is rising, and they need to take the initiative to look for scrap suppliers and favor the seller's market. According to SMM, the new solid waste law was officially launched on September 1st, which may also have something to do with the recent reduction in the supply of waste.

[selected SMM Weekly] the most stringent waste law officially lies in the position of waste enterprises to take the initiative to find scrap copper suppliers and keep imports on the sidelines.

With regard to aluminum, judging from the situation this week (09.7-09.11), consumption is about to pick up after entering September, and inventory is still relatively low and has not decreased rapidly. It is expected that the main 2010 contract aluminum price will continue to decline within 200yuan / ton, and there is still some support at the Wansi mark, but due to the possibility of falsification in the peak consumption season, and the pressure caused by the release of new Q3-Q4 capacity is expected to be obvious, and the upstream is expected to be under pressure. Generally speaking, there may be a small rebound in the low level this week, but the rebound space is limited, with an operating range of 14100-14600 yuan / ton.

On the lead side, on the domestic side, China released inflation data this week, which is expected to have a limited impact on the market. Technically, lead has entered a downward trend, and the height of short-term technical rebound is limited. Fundamentally, the overhaul of the western mining industry affects the release of certain output, but as the output of the three refineries in Jiyuan, Henan Province returns to normal, the domestic electrolytic lead supply picks up steadily, recycled lead, the impact of solid waste method continues, some refineries suspend the purchase of waste batteries, raw material inventory is relatively tight, coupled with the current lower lead prices, declining regeneration profits, the willingness to continue to expand production in the short term is not high, after the completion of follow-up approval procedures, The situation of refinery production in this part. Consumption last August car sales maintained the same month-on-month increase, car consumption is still good, coupled with the National Day holiday, some big battery manufacturers plan to stock, consumption is still looking forward to, lead price fundamentals are still good, did not continue to deteriorate.

In terms of zinc, as far as Shanghai zinc is concerned, the drag on consumption by environmental protection in Tianjin has not yet ended, the domestic inventory has slightly increased, and the rising logic of taking consumption as the anchor has been tested. however, the export improvement brought about by policy-guided infrastructure consumption and the recovery of overseas consumption has not failed, and the funds will wait and see carefully and sell short cautiously. Looking back to the supply side, the output of the smelter is expected to return to a high level in September. For domestic smelter production in the fourth quarter, the main restriction lies in the mine supply and the corresponding profit level. As the balance of domestic mines needs to be adjusted by imports, there is uncertainty as to whether the supply of imported minerals can improve as expected in the fourth quarter. Some smelters intend to take the lead in signing some contracts for winter storage supply, and the demand for winter storage is released ahead of schedule. In addition, the quoted price of imported mines is on the low side, and the supply side of the mine will provide lower support for zinc in the future. It is expected that the main force of zinc in this cycle will operate around 19500-20600 yuan / ton. The spot price of zinc in Shanghai is expected to rise 90-160 yuan / ton in October, while Lun zinc may operate in the range of 2440-2570 US dollars / ton next week.

[SMM Weekly report selected] the supply side of the mine will become the future zinc to provide lower support. It is expected that the downward space for zinc price is limited.

In terms of nickel, the sharp correction in the prices of nickel and various metals is dominated by macro factors such as the collapse of US stocks and the appreciation of the US dollar, and there is a range of appropriate recovery and adjustment in the short term; nickel fundamentals are temporarily stable, but stainless steel prices tend to peak at a high level. the upward pressure on nickel prices will increase, but at the same time, the space for callback will be limited; at present, the short-term fundamentals of nickel are good, and in the long run, they are better than originally expected. In the third quarter, 300 series stainless steel high output assist high nickel pig iron from leftover to deficient, fourth quarter or tight balance, the surplus is less than originally expected, so some nickel market fundamentals of nickel pig iron are good; in terms of pure nickel, although consumption is not good, however, the reduction of domestic nickel spot imports has a certain adjustment to the market, so that the domestic social inventory is basically balanced, and the market performance is relatively stable.

[SMM Weekly selection] the price of high nickel pig iron continues to rise, and the game atmosphere is still strong.

In terms of tin, Myanmar has 746 confirmed cases as of September 4, 1930, 473 fewer than last Friday. The epidemic is getting worse and shows no sign of turning back, which is expected to affect its domestic production. Coupled with heavy rains during the month, Myanmar is expected to import less tin to China in the near future. The processing fee is still at a low level, and the smelter is cautious in receiving the goods for the tin ore with low processing fee.

[selected SMM Weekly] it is estimated that Myanmar's recent reduction of processing fees for imported tin ores from China is still at a low level.

In terms of the black system, the thread fell nearly 0.2%, the hot coil fell nearly 0.3%, stainless steel rose nearly 0.2%, coke rose nearly 0.9%, coking coal rose nearly 0.8%, iron ore rose nearly 1.4%. The current price trend during the threaded period was strong last week, the commodity market rose at the beginning of the week, and the current price during the threaded period also reached a new level. On Monday, both rose to about 30 yuan per ton, and the trading atmosphere was extremely high on the day. Then it entered a period of relaxation and consolidation after a strong trend, showing a trend of strong shock as a whole. The market atmosphere has also gradually calmed down. However, affected by the collapse of the outer disk on Friday, the snail plunged rapidly, and the spot market was dragged down by this. The prices of the mainstream markets fell by 10-20 yuan / ton, and the market was more cautious and wait-and-see.

[SMM Weekly selection] can the "Golden Nine and Silver Ten" come to the steel market as scheduled and whether the "good start" is sustainable?

Crude oil fell nearly 2.6% in the previous period, while U.S. oil fell on Friday, and crude oil futures on both indicators are likely to have their biggest weekly declines since June, as weak demand and ample supply offset support from a weaker dollar.

In terms of precious metals, Shanghai gold rose nearly 0.4%, Shanghai silver rose nearly 1.1%, and international spot gold rose slightly to close at 1933.99 US dollars per ounce on Friday. Gold prices were supported by a sharp fall in the dollar index. Analysts point out that the correlation between gold and the dollar has increased, especially in the past few weeks, and the dollar has rebounded after the release of strong economic reports, especially after the release of unemployment data, putting pressure on gold prices.

As of 09:45, the status of contracts in the metals and crude oil markets: 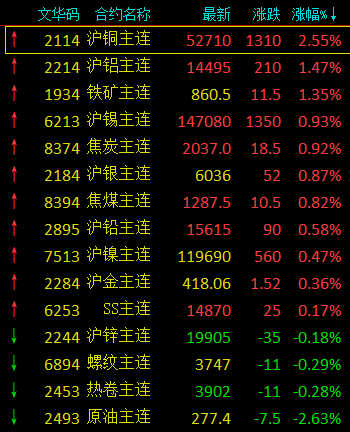