SMM9 March 2: most of the non-ferrous metals are red today. By the end of the day, Shanghai zinc rose 2.35%, Shanghai copper rose 1.92%, Shanghai lead rose 1.88%, Shanghai nickel rose 1.84%, Shanghai tin rose 0.75%, and Shanghai aluminum fell 0.27%. In terms of lead, SMM believes that the increase in recycled lead may still exist in September, while the lead battery consumption season is sluggish, battery factory procurement demand is unlikely to increase, the overall trend of oversupply is still there, and the fundamentals are difficult to increase the upward force for lead prices, but the price of waste batteries may become a support, and lead prices are expected to maintain a volatile trend in early September. However, the consumption of lead ingots in late September is not clear, and it is expected that the overall focus of lead prices in September will be further lower than that in August.

[SMM monthly Outlook] lead battery consumption is sluggish in peak season. In September, the center of gravity of lead price further moved down.

On the black side, threads rose 0.32%, hot rolls rose 1.23%, stainless steel fell 0.1%, coke rose 1.74%, coking coal rose 2.1%, and iron ore rose 0.24%. According to the Office of the United States Trade Representative, the United States will take additional measures to solve the problem of steel imports from Mexico and Brazil. The U.S. government will continue to exempt certain steel imports from Mexico and plans to hold more negotiations in December. According to a previous announcement, in view of the downturn in the US steel market, the US government announced a reduction in the quota of semi-finished steel imports from Brazil. Brazil's quota for semi-finished products in 2020 will be reduced from 350000 tons to 60, 000 tons, the Office of the United States Trade Representative said in a statement on Monday. Other steel products maintain existing quotas and plan to discuss steel import quotas for 2021 with Brazil in December.

[SMM brief Review] in view of the impact of the epidemic on construction machinery, the United States has taken more measures to import steel from Mexico and Pakistan.

Crude oil fell 0.47% in the previous period, and as the world's major economies recover slowly from epidemic-related blockades, analysts believe there may still be an oversupply of fuel in the market. Us oil production rose 420000 b / d to 10.44 million b / d in June, according to a monthly report released by the (EIA) on Monday. The news put further pressure on oil prices.

Precious metals rose strongly, with the main force of Shanghai Silver rising more than 3%, the fourth day in a row, and the main force of Shanghai Gold rising 0.96%, also rising for the fourth day. On the one hand, the dollar has suffered a double whammy as market expectations of a US recession are rising and the Fed's new policy framework continues to raise bets that US interest rates will remain low for longer than other countries, falling below the 92 mark, a new low in more than two years. COMEX futures briefly broke through $1990 / oz in the morning. On the other hand, the uncertainty of the US election and the increasing geopolitical tension have brought some safe-haven demand for precious metals. 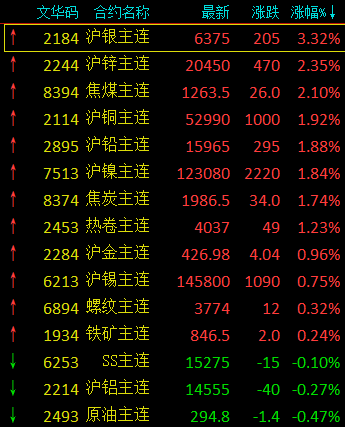 The bull market does not stop, and there is a strong willingness for capital to enter the market. The Mandarin Commodity Index inflows exceeded 3 billion yuan. Most of them poured into the hottest non-ferrous metals sector of the day, with Dr. Copper raking in more than 1 billion yuan, ranking second in the list of commodity capital inflows. The first inflow is silver that has risen four times in a row. The chemical sector also absorbed nearly 1 billion yuan in the day, of which the methanol outbreak stimulated more than 700 million dollars to enter the market, ranking third in commodities. In terms of capital outflows, crude oil was sold off, losing more than 700 million yuan, far more than other varieties. 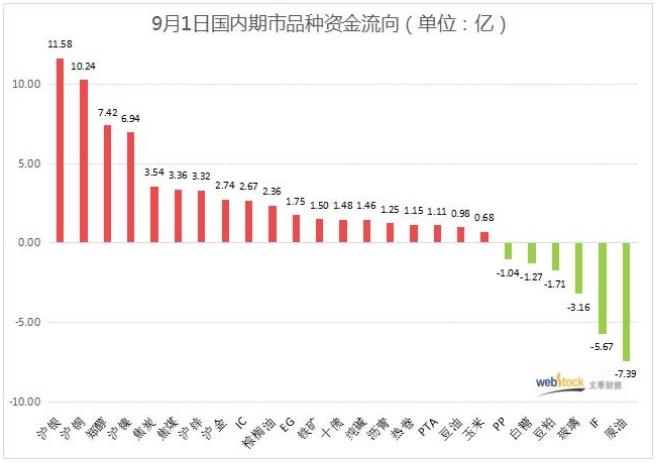