SMM7 March 30: today's non-ferrous metals market is red, fat, green and thin. By the end of the day, Shanghai zinc rose 2.01%, Shanghai aluminum rose 1.8%, Shanghai nickel rose 1.64%, Shanghai lead rose 1.52%, Shanghai copper fell 0.15%, and Shanghai tin fell 0.75%. As for copper, according to SMM, at present, some domestic copper smelters have been affected by the shortage of raw materials and declining profits to reduce production or carry out maintenance and adjustment, mainly private refineries, especially some private roughing plants have centralized maintenance in July and August this year. Although the overhaul of domestic refineries increased in July, part of the overhaul was passively adjusted by the pressure of the raw material port, so it was difficult to change the current tight supply of copper concentrate caused by the overseas epidemic.

In terms of black, thread rose 0.51%, hot coil rose 1.11%, stainless steel rose 1.24%, coke fell 0.84%, coking coal fell 1.15%, and iron ore rose 1.02%. According to SMM research, the blast furnace operating rate in the last week of July was 90.3%, up 0.23% from last week. The increase mainly comes from the end of overhaul of some steel mills affected by floods this week, and it is expected that the blast furnace operating rate will be high and stable next week. The Federal Reserve announced its interest rate resolution in the early hours of Thursday (July 30), leaving interest rates unchanged at 0.25%. This week, Fed officials will also discuss how to provide more stimulus to the economy. It is expected that in a warmer macro atmosphere, supply-side disturbances on prices are limited, and short-term steel prices are still expected to be strong.

[SMM analysis] the operating rate of blast furnace rebounded slightly, and the price suppression is expected to be limited.

In terms of precious metals, Shanghai Gold fell 0.24% and Shanghai Silver fell 2.74%. According to news, despite the decline in production in the second quarter of 2020, Canadian gold producer Alamos Gold is still optimistic about the company's future production prospects. The company said that by June, both, Island Gold and Mulatos projects had safely returned to normal operating levels. In terms of production, the company produced a total of 78400 ounces of gold in the three months ended June 30, down from 125200 ounces in the same period the previous year. 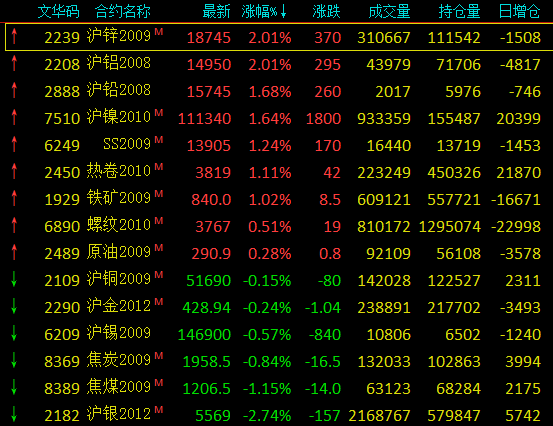 In terms of capital flow, 2.7 billion funds quietly flowed into Wenhua commodities, and the non-ferrous plate was still the main attraction of gold, with 878 million yuan in capital endorsement, 759 million yuan to help the oil plate rebound, black chain rarely attracted 423 million funds to enter the market, and another 281 million yuan into the crude oil plate. Corn chain and chemical plate also have more than 100 million yuan of capital attention. On the other hand, the once-sharp precious metals were abandoned by more than 300 million funds, and the funds of the three major futures index left quickly. Specifically, Shanghai Nickel and Soybean Oil are the main suckers today, with 583 million and 553 million respectively entering the market. 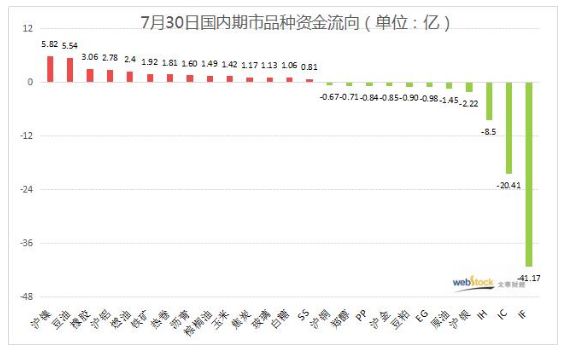 A brief comment on SMM analysts on July 30th

Copper: the main force of Shanghai Copper opened at 52150 yuan / ton in the morning, and the opening was the highest point of the day. After the opening, the short positions put pressure on the copper price, and the price quickly fell to 51810 yuan / ton. after a brief adjustment, the copper price fell again from 51940 yuan / position to about 200 yuan / ton. In the second trading session, the center of gravity of copper prices rose somewhat, closing at 51890 yuan / ton at noon. At the beginning of afternoon trading, it was suppressed by short-sellers. Copper prices crossed the daily average line and went all the way down to explore the intraday low of 51600 yuan / ton. In late trading, it closed at 51690 yuan / ton, down 80 yuan / ton, or 0.15%. Today, the main daily position of Shanghai Copper increased by 2311 to 123000, mainly for short positions, and trading volume increased by 15000 to 152000. 08 during the contract day, positions were reduced by 7198 to 54000, mainly by long positions, while trading volume decreased by 4000 to 29000. In the early morning, the Fed FOMC meeting announced that the benchmark interest rate will remain unchanged in the range of 0% ul. 0.25%, and will continue to release liquidity easing policy. The tone of monetary policy easing remained unchanged, boosting investor confidence, but the Fed also reiterated that the outlook for the US economy would depend to a large extent on the development of the novel coronavirus epidemic. At present, novel coronavirus's confirmed cases around the world have broken through the 17 million mark, and the escalating novel coronavirus epidemic crisis has made investors look at the economic situation cautiously, thus putting some pressure on copper prices. Today, Shanghai copper negative, KDJ opening expansion, but the bottom is still supported by the 5-day, 10-day moving average, copper price callback space is limited. In the evening, waiting for the outer disk guidance, test Shanghai copper rose again to recover the decline.

Lead: within a day, the 2009 contract for Shanghai lead is opened at 15595 yuan / ton. In early trading, bulls strongly increased positions, Shanghai lead uplink, under pressure of 15740 yuan / ton to give back part of the slight increase consolidation. Close to noon, the bulls again, Shanghai lead several times to explore 15780 yuan / ton did not stand firm. In the afternoon, under the influence of the general decline in basic metals, Shanghai lead fell back to a low of 15630 yuan / ton, and rose back in late trading on the support of the daily moving average, closing at 15710 yuan / ton, up 235 yuan / ton, or 1.52%. The position increased by 1273 to 24950, and the trading volume decreased by 6932 to 38314. Shanghai lead closed at Wulianyang, which has broken through the previous pressure line and entered the new upstream channel, but the downstream consumption is relatively weak at the end of the month, and the upward power of Shanghai lead is lacking, so we need to pay attention to whether the bulls can effectively break through 15800 yuan / ton at night.