SMM News: recently, the US dollar fell back to a new low in nearly two years, the real interest rate on US debt fell to an all-time low, the superimposed epidemic in many countries intensified, Sino-US relations were tense, and under multiple positive resonances, the international gold price broke through 1921 US dollars per ounce on July 27th, 2020, a record high.

The demand for risk aversion in the game between big countries and superimposed powers is high.

Sino-US relations showed signs of escalating again this month, with events such as Huawei, Meng Wanzhou and the mutual closure of consulates between China and the United States frequently making headlines. In the year of the US election, the game between big powers and the geographical situation will become the "X" factors in the world in the second half of the year.

At present, the total number of confirmed cases of COVID-19 in the world has exceeded 15 million, and dozens of countries and regions have repeatedly reached record highs in a single day. despite the positive macro data, the market is lingering concerns about the economic outlook. The Federal Reserve believes that it may take 1-2 years or more for the US economy to return to its pre-epidemic level. In the face of a continuing outbreak, the number of initial claims for unemployment benefits in the United States last week recorded 1.416 million, higher than the expected figure of 1.3 million, rising for the first time after falling for 15 consecutive weeks. According to the latest survey by the U.S. Census Bureau, U.S. employment fell by about 6.7 million from mid-June to mid-July, with a sharp drop of 4.1 million from the first week to the second week of July. Based on this data, it is speculated that the US non-farm data for July, which will be released next week, may be reversed again.

Under the background of great uncertainty about the global economic and political outlook, the liquidity of the monetary easing market is abundant, and the demand for risk aversion makes gold one of the hottest investment targets. In the first six months, the total size of global gold ETF increased by 734 tons to a record high of 3621 tons, and the increase has reached a record annual inflow. The hot demand for ETF fully made up for the decline in gold demand caused by the epidemic. The world's largest gold ETF-SPDR position rose 50 tonnes a month to 1228 tonnes in July, continuing to hit an eight-year high, but it is still a far cry from the peak of 1340 tonnes set in 2012, which could mean there is still room for gold to grow. 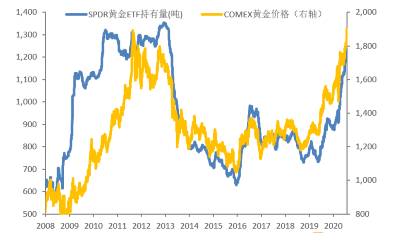 The direction of easing remains the same and the environment of low interest rates lasts forever.

The central bank interest rate decisions of the United States, Europe and Japan in June left interest rates unchanged and made it clear that low interest rates would remain low for a long time. The Treasury Secretary said that the White House and Senate Republicans have reached a basic consensus on a new round of fiscal policy, the size of the relief bill will be about $1 trillion, does not rule out the possibility of more stimulus measures in the future. The EU summit also reached the largest economic stimulus package in EU history. According to the agreement, the EU's long-term budget from 2021 to 2027 is 1.074 trillion euros, and a "recovery fund" with a total amount of 750 billion euros is set up on the budget basis. As a result, the total size of fiscal instruments that the EU can use in the future is as high as 1.82 trillion euros. Global easing continues to intensify to deal with the lasting impact of the epidemic, with global negative-interest-rate debt rising from $8,000bn in March to more than $15 trillion in a low-interest-rate environment.

Although it is highly unlikely that the Fed will eventually implement negative interest rates, the control of the yield curve is already under consideration by the Fed, and US nominal interest rates will be suppressed at extremely low levels for a long time. Recently, implied inflation expectations for US debt have rebounded to 1.5%. If future inflation expectations can return to 2.5% after the financial crisis, there is still room for real interest rates on US debt to fall further above the current historical low of-0.9%. As a result, the opportunity cost of gold will continue to be depressed. The level of inflation in the United States is highly related to the price of crude oil, and it is worth watching whether crude oil can break through the current consolidation range around $40. 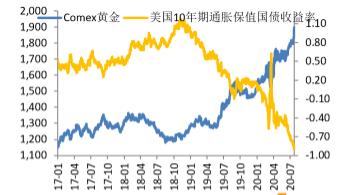 The Fed's balance sheet was about $7 trillion at the end of July, up $2.9 trillion since March. Although the Fed's balance sheet fell slightly for four consecutive weeks from June to July as buybacks and central bank dollar swaps shrank, the Fed's easing measures did not shift, and this round of QE is expected to far exceed the combined level of $3.66 trillion in the three rounds of the financial crisis.

As the United States overissues money and M2 grows by more than 23% year-on-year, uncontrolled money printing will damage the dollar's status as a global reserve currency. On the other hand, the supply of gold has declined rather than increased, and the relative scarcity gives gold a rising basis.

The monthly deficit of the United States reached an all-time high of 860 billion US dollars in June. The Congressional Budget Office expects the federal government's total budget deficit this year to exceed $3.7 trillion, four times that of the previous fiscal year and accounting for nearly 20 per cent of GDP, compared with an average of just 3 per cent over the past 50 years. The trend of gold price has a strong correlation with the US deficit, because the US deficit problem reflects the credit decline of both the US and the US dollar.

After the liquidity crisis is lifted, the poor control of the epidemic in the United States and "flooding" will certainly lead to the start of a weak dollar cycle. The weekly line of the dollar index has been five consecutive overcast and refreshed the new low in the past two years, which has become a major factor in the strength of gold.

Looking forward to the future, in the US election year, the tone of the Fed's monetary easing will not turn, the game between great powers will become the norm, and Trump's "back-to-back battle" and "fancy show" with lagging approval ratings will also become favorable drivers of gold. Under the background that there are many uncertain factors in both economy and politics, gold credit is irreplaceable. After the international gold price hit an all-time high, the upper space has been opened, 2000 US dollars / ounce will be the next target, gold is still available in the future, the upper space is full of imagination.

Recently, silver has been pulling up continuously, and the monthly increase of more than 30% in July once again reflects the nature of the "demon". The gold-to-silver ratio has fallen from the year's high of 130 to around 80, and there is still room for decline compared with the historical average. The commodity nature of silver makes it stronger to follow the trend of commodities in the near future, and the worst period for silver consumption expectations has passed, but the overseas epidemic is far from being under control, and there is great uncertainty about whether gold and silver can continue to return to the average in the short term. It is not recommended to chase the rally at a time when silver is violently rising, but it is appropriate to wait for a long opportunity for a pullback.

CST
Industry News
Hedge Funds Cover Gold Shorts At Fastest Pace In 2016 On Election Jitters
For the second consecutive week, hedge funds waded back into gold with the latest data from the Commodity Futures Trading Commission showing that short covering was the biggest market driver.

CST
Industry News
You’ve Got Mail, Did You Read the E-Mail- Gold and Equities Sure Did
There’s only one story today and it concerns a massive collective sigh of relief from investors and traders in equities and the U.S. dollar. The reaction was caused by the director of the FBI, James C

CST
Industry News
Gold Wins With Either A Trump Or Clinton Victory – Analyst
The U.S. presidential election is in its final leg and one gold analyst says that either a Democratic or Republican win will be positive for gold.