For zinc, LME zinc stocks have continued to climb since mid-late July, with LME zinc stocks rising by 14175 tonnes to 173000 tonnes as of July 28, with New Orleans having the biggest increase. SMM believes that the main reason for the sharp increase in LME zinc inventory is: first, the new Orr warehouse is located in the United States, and the current epidemic situation in the United States is still grim. Although overseas countries have started their economies one after another, the recovery of overseas consumption is still slow, and some zinc ingots need to be delivered to digest some of the excess zinc ingots. Second, with the rebound of zinc prices, especially after the Lun zinc price broke through 2200 US dollars / ton, the holders are more willing to cash in their positions at high prices.

[SMM brief Review] LME Zinc inventory has greatly increased, Zinc has risen, and holders are more willing to cash in their positions.

Tin, the recent tin situation in Shanghai is strong, the lower support is solid, the short sellers dare not enter the market rashly, and the bulls are advancing by leaps and bounds. The superposition of two waves last week was affected by diplomatic events and the accumulation of strength was able to break through the pressure level this week. Shanghai tin prices are now located near the Brin belt, short-term need to guard against the risk of high callback, but the overall market is still dominated by bullish forces, it is difficult to reverse for the time being.

[SMM's point of view] can you still get on the bus after the coloured group falls back on the roller coaster in Shanghai and tin?

In terms of black, thread rose nearly 0.1%, hot coil rose nearly 0.3%, stainless steel rose nearly 0.1%, coke rose nearly 0.2%, coking coal fell nearly 0.3%, iron ore rose nearly 0.9%. According to SMM research, as of July 28, the operating rate of 34 independent electric arc furnace steel mills across the country was 81.27%. It rose 2.72 percentage points from last week, 3.54 percentage points higher than the same period last month. It has been three consecutive weeks of rise this week, mainly due to the reduction of the geographical scope affected by the rainy season, so that demand has gradually begun to improve, and the shipping situation of steel mills has also improved compared with the previous period. The relief of factory warehouse pressure has led to the resumption of production of some steel mills that have reduced production as a result.

According to the research situation of SMM, the overall terminal enterprises still have expectations for an increase in steel procurement in August, and the warming momentum of demand will support the slow recovery of the operating rate of electric arc furnace. However, due to the current scrap prices are still strong, and inventory suppression of steel prices are difficult to have a sustained rebound, so the upward space is limited.

[SMM exclusive monitoring] demand "sees the sun in the clouds", and the operating rate of electric furnace has rebounded for three consecutive weeks.

Zero hedging, a well-known financial blog, said oil prices fell during the day as hopes for the US economic stimulus package faded and there were huge differences between the two parties on economic issues, as well as the "suspension" of (MLB) in Major League Baseball, which slowed the rebound in demand. Although API data showed that US crude oil inventories fell more than expected, given the unexpectedly large increase in data last week and doubts about consumer demand for gasoline, WTI crude prices fell after hitting $41 a barrel after the data were released, and market sentiment was mixed. Tyche Capital analysts believe that there is a significant weakening in demand for crude oil in both the driving and aviation industries.

In the morning trading of precious metals, Shanghai gold fell nearly 0.3% and Shanghai silver fell nearly 0.2%. Despite sharp market fluctuations, most market watchers expect gold to continue to rise. There are many positive factors: the dollar remains weak, geopolitical tensions are rising, real interest rates are falling, and governments and central banks around the world have launched huge stimulus measures to revive the economy. 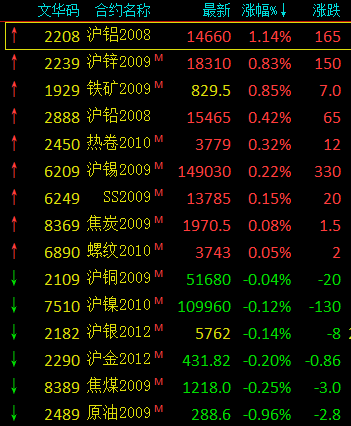 Copper: last night, Lun Copper closed at 6469 US dollars / ton, up 0.61%. The trading volume was 15000 lots, and the short positions were reduced by 641 lots to 316000 lots. The Shanghai Copper 2009 contract closed at 51830 yuan / ton, up 0.25%. The trading volume was 64000 lots, and the long positions increased by 2467 lots to 117000 lots. Copper prices rebounded after hitting a low last night, with Lun copper falling to a low of $6391 a tonne, followed by a strong rebound, which rose more than $70 a tonne in the evening. Shanghai copper also maintained its upside after opening at night, recovering its diving decline in the afternoon. On the macro level, negotiations on a new round of stimulus package in the United States are difficult. In July, the consumer confidence index fell more than expected, and the three major stock indexes of the United States fell across the board, indicating the continuing impact of the epidemic on the United States. Copper prices are expected to remain volatile, underpinned by loose money and tight supply expectations. Spot aspect, the market has basically turned to next month ticket quotation, the transaction presents the prize pool seesaw. It is expected to be 6400-6470 US dollars / ton for Lun Copper and 51500-51900 yuan / ton for Shanghai Copper today. It is expected that the spot water will rise to 30-100 yuan / ton today.

Lead: overnight, Shanghai lead opened at 15435 yuan / ton. At the beginning of the session, Shanghai lead fluctuated and fell to 15355 yuan / ton. After hitting the bottom, it rose and recovered the decline. It was finally reported at 15480 yuan / ton, an increase of 0.29%. Domestic fundamentals are expected to be relatively good. Short-term focus on whether the upper pressure level can effectively break through.

Zinc: overnight, the main 2009 contract of Shanghai Zinc opened at 18030 yuan / tonne. After Shanghai Zinc briefly hit a low of 18020 yuan / ton at the beginning of the day, the bulls were even better. Shanghai Zinc sang a song all the way up, and finally closed up at 18460 yuan / ton, up 300 yuan / ton, or 1.65%. The trading volume reached 119375, and the position increased by 3097 to 101005. Dayang column was recorded in Shanghai overnight, the daily K center of gravity further moved upward, the lower 10-day moving average provided support, the upper Bollinger Road was pressed, and the opening of KDJ index was expanded. Fundamentally, galvanizing supports the main consumption of zinc, downstream orders have improved, and orders for die-casting zinc alloys have increased in some countries with the resumption of overseas economies, superimposed demand expectations for post-disaster reconstruction, supporting the upside of zinc prices. however, supply-side incremental materials inhibit the upside of zinc in Shanghai. The contract price of Shanghai Zinc 2009 is expected to operate in the range of 18100-18600 yuan / ton, and it is expected that the price of domestic Shuangyan zinc will rise by 80-90 yuan / ton in August.

Nickel: Shanghai Nickel opened at 108400 yuan / ton last night, showing a concussive upward trend to repair the larger decline in the day. After the opening, the short sellers stopped their profits and reduced their positions, and Shanghai Nickel soon stood above 109000 yuan / tonne. After the bulls' confidence was restored, the positions were gradually increased so that Shanghai Nickel recovered its five-day moving average of 109450 yuan / tonne. The short-selling force continued to weaken in late trading. Shanghai Nickel briefly reached 110070 yuan / ton and then fell back, and finally closed at 109790 yuan / ton, up 1050 yuan / ton, or 0.97%. The trading volume was 335000 lots, and the position decreased by 2962 lots to 135000 lots. Technical aspects are still many, MACD red column continuous amplification, today continue to repair the center of gravity to the 110000 mark as the direction, after consolidation to test the upper resistance.