The three uses of antimony: flame retardants, alloys and catalysts play an important role in the production of industrial products. The flame retardants are mainly antimony trioxide, in which antimony used in the production of flame retardants accounts for about 60% of the total antimony consumption, antimony consumed in alloy applications accounts for about 20%, and antimony consumed in catalyst uses accounts for about 12%. The consumption in other aspects is about 8%, and there are many medium products used in catalysts, among which representative products are "antimony glycol", "antimony acetate" and "metal passivator". What we now focus on is a product that has maintained a good trend of development and relatively fast growth in the past 10 years, antimony ethylene glycol, which is used in polyester catalyst.

Antimony glycol began to be used in polyester industrial Polycondensation as early as in the 1970s, when it was in the trial stage, and the quality was not very stable. in 1994, the French Chemical Company developed a more mature new type of antimony glycol catalyst. it was first used by foreign polyester manufacturers and gradually entered the Chinese market since 1996. Many domestic companies have tried imported antimony ethylene glycol as Polycondensation catalyst and achieved good results. From 1996 to 1998, domestic companies, colleges and scientific research institutions began to independently develop domestic antimony glycol. The successful maturity of domestic independent research and development and its introduction to the market broke out in 1999, when there were a number of companies, universities and scientific research institutions. Successfully launched their own domestic "antimony ethylene glycol" scientific research achievements, and applied for a patent. There were three representative ones in that year. 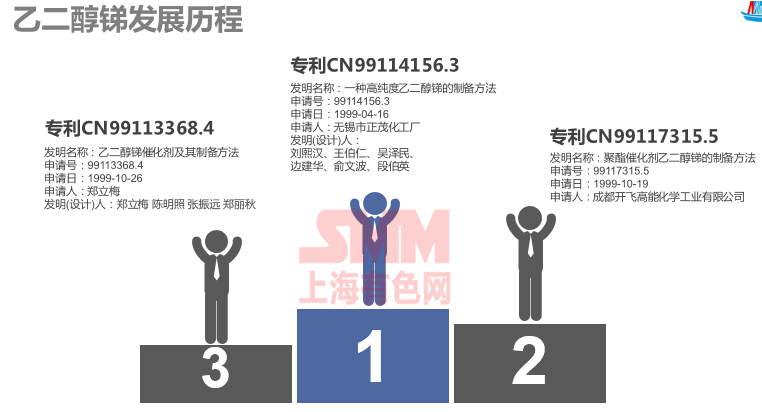 In the use of polyester industry:

1. Among all polyester catalyst products, antimony glycol has a high market share of about 75%.

2. High antimony content and good activity, which can improve the production capacity of polyester plant.

3. It has high solubility and good dispersibility in ethylene glycol solution.

4. The catalyst itself will not bring in new impurities, which can improve the internal quality of chips and improve the spinnability of post-processing.

1. At present, the global polyester industry tends to the development trend of environmental protection catalysts, and the use of heavy metal-free catalysts has formed a relatively clear understanding.

2. The antimony content limits of polyester bottles and polyester films (including sheets-for blister packaging) directly related to food packaging in PET products have been set by the national standard.

3. The European Union and the United States have clear restrictions on the content of antimony in some products.

1. With the rapid development of the polyester industry in the past 10 years, the production capacity and output have increased at an annual rate of 4.8% during the 13th five-year Plan period in the past five years, which has also brought the development of polyester catalysts.

2. The European Union and the United States have respectively listed antimony as a priority pollutant, other countries have also set strict environmental standards for antimony, and Japan also has restrictions on antimony catalysts.

3. As antimony is a heavy metal, the problem of antimony toxicity has attracted more and more media attention and national attention, and the restrictions on antimony-containing products will become more and more stringent.

4. The enthusiasm of antimony related catalyst research projects decreased, and the R & D investment of related projects was relatively low.

In 2019, other producers of antimony glycol in China (producers outside the antimony industry association) have an annual output of 6500 tons.

In 2019, domestic polyester synthesis needs 20092 tons of polyester catalyst and 18083 tons of ethylene glycol antimony catalyst. A year-on-year increase of 15%.

The main types of catalysts used for Polycondensation in polyester production are antimony system, germanium system, titanium system and so on.

Germanium catalyst: although it has good reaction and stability in polyester plant, it does not have cost competitive advantage and mass production capacity due to the high cost of germanium and scarcity of resources.

Titanium-based catalysts: although in recent years, titanium-based polyester catalysts have reached a consensus in academic circles to replace antimony catalysts, and have become a hot research object of many experts, scientific research institutions, and colleges, they have been researched and used since 1970s. During the use of titanium-based composite catalysts in polyester plants, it is common that the reaction rate is too fast and affects the hue of polymers. No major breakthroughs have been made in these two aspects. Other side effects are caused in the process of use, and there are many by-products, and the viscosity of the polyester chip is not ideal, so that the color of the finished polymer is easy to yellowing.

Antimony glycol, from the production point of view, has the following advantages:

1. To prevent the formation of alcoholysis products and alcohol impurities and high Polycondensation ability;

3. High antimony content and good activity, which can improve the production capacity of the unit.

4. The catalyst itself will not bring new impurities and can improve the internal quality of the chip.

5. The color of the polyester product is better, the b value and L value are improved, and the processing spinnability is improved.

6. So as to increase the output, reduce the total cost of polyester chips, and increase the market competitiveness of the products.