SMM7 March 23: most of the non-ferrous metals market fell today. By the end of the day, Shanghai lead fell 1.43%, Shanghai Nickel fell 1.21%, Shanghai Tin fell 1.02%, Shanghai Copper fell 0.88%, Shanghai Zinc fell 0.25%, Shanghai Aluminum rose 0.03%, copper. Since mid-May, LME inventory has continued to decline. As of July 22, LME copper inventory dropped to 145000 tons, nearly 50% lower than in mid-May. Among them, inventory fell to 4500 tons in Asia, 98500 tons in Europe and 42000 tons in America. The proportion of written-off warehouse receipts has risen to more than 50%, of which the proportion of written-off warehouse receipts in Asian warehouses is as high as 94.44%. The space for destocking in Asia has been reduced to a historical position, and the amount of deliverable in the short term is very limited. Recently, supply problems have been simmering in major copper-producing countries in South America, a strike by copper miners in Chile is still simmering, and protesters in Peru recently attacked a convoy at the Las Bambas copper mine. SMM expects imports of copper to decrease month-on-month in August, and import parity may open up opportunities.

In terms of black, thread rose 0.45%, hot coil rose 0.84%, stainless steel fell 0.96%, coke rose 2.23%, coke rose 0.29%, iron ore fell 0.29%. According to SMM research, the operating rate of blast furnace in the fourth week of July was 90.07%, down 0.23% from last week. The reduction mainly comes from the overhaul of blast furnaces affected by flooding in some steel mills. It is estimated that the operating rate of blast furnace is expected to be high and stable next week. In the past week, there has been a lot of rain, which has led to the high water level of the Yangtze River. as a result, some docks along the line have been sealed, the transportation of raw materials and finished materials have been affected to a certain extent, and some steel mills have carried out maintenance of blast furnaces. The relationship between supply and demand has improved significantly, and the domestic financial market has rebounded sharply after a sharp fall in the previous few days, boosting market sentiment. It is expected that in the short term, due to the positive macro aspects and improved fundamentals, the market is expected to run strongly, but we need to be aware of the risk of rising and falling caused by the negative short-term news and the rapid rise of the disk.

Last week, crude oil and distillate stocks in the United States unexpectedly increased and fuel demand fell, as a sharp increase in cases of new crown virus infection hit fuel consumption in the United States, the last issue of crude oil fell 0.53%, the JEIA said on Wednesday. Some analysts said that under normal circumstances, fuel stocks would be largely digested, but the surge in the number of new crown cases has strangled the strength of sha's recovery. The oil market reacted unexpectedly calmly to the unexpected increase in crude oil stocks announced by the EIA and the escalation of tensions between the United States and China. 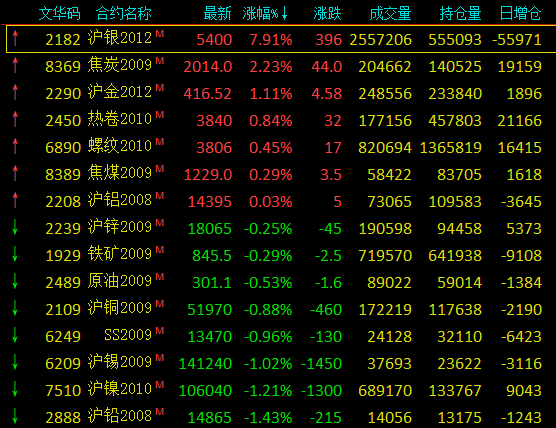 The domestic commodity market as a whole is still dominated by net capital inflows, with a net inflow of 1.515 billion yuan into the Mandarin Commodity Index. The black department was once again popular with funds, with an inflow of 1.276 billion yuan, of which a sharp rise in coke received 916 million additional funds. The corn broke out suddenly, gaining 89000 hands to increase the position, and the inflow of capital was nearly 300 million yuan. Non-ferrous plate continued to adjust, 589 million funds continued to flee. Precious metal plate showed signs of profit flight, outflow of 393 million yuan, of which Shanghai Bank suffered 74500 holdings reduction, outflow of 573 million yuan. 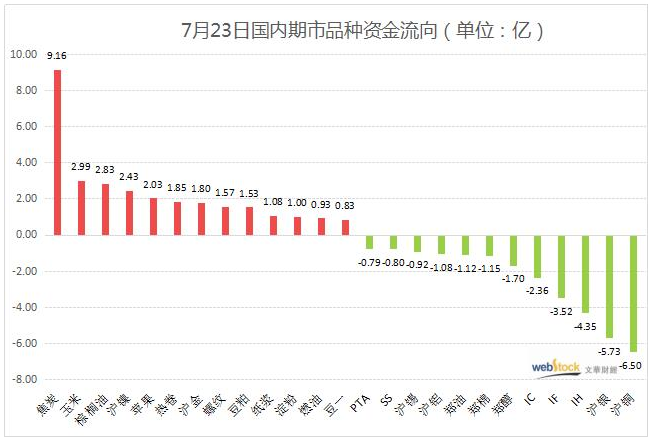 A brief comment on SMM analysts on July 23rd

Copper: today, the main force of Shanghai copper opened at 51950 yuan / ton in the morning. after the opening, the center of gravity of copper price fluctuated narrowly around 51920 yuan / ton position, and then declined due to more flat entry into the disk, and explored the intraday low of 51590 yuan / ton position. Copper prices rebounded at a low level, with the center of gravity rising about 100 yuan / ton to close at 51750 yuan / ton at noon. Opening in the afternoon, Shanghai Copper was operating smoothly near the 51710 yuan / ton first line. Near the end of the day, bullish copper prices rose to close at 51970 yuan / ton, down 460 yuan / ton today, or 0.88%. During the day, 09 contracts reduced positions by 2190 to 118000, mainly by long positions, while trading volume increased by 23000 to 172000. 08 during the contract day, positions were reduced by 2763 to 75000, mainly by long positions, while trading volume decreased by 19000 to 72000. Copper in Shanghai fell today, mainly as escalating tensions between China and the United States hit market optimism. Last night, under the influence of the US political provocation demanding the closure of the Chinese consulate in Houston, the copper night market in Shanghai opened low and the center of gravity shifted somewhat. Tensions between China and the United States continued to grow, investors were unnerved by new diplomatic disputes, and risk aversion rebounded to weigh on copper prices. Today, Shanghai copper negative, KDJ opening expansion, but there are still 5, 10-day moving average adhesion to the bottom. Wait for the outer disk guidelines at night to test whether the bulls can push again to support copper prices to continue to rise and stand firm at the 52000 mark.