In terms of zinc, consumer end, galvanizing, due to the squeeze of galvanized tube enterprises' profits, and even production losses in some areas, only some enterprises are able to retain profits because of their large reserves in the early stage, and the overall production is lower than before. As for galvanized structural parts, orders show signs of warming up, superimposed Hebei enterprise scaffolding is still a strong support, terminal projects in some areas will start in early August. Galvanized sheet, home appliance demand with strong toughness superimposed export orders have improved. Die-casting zinc alloy plate, the current terminal overseas order improvement is not obvious, China has entered the off-season of traditional consumption, the overall demand has shrunk. Zinc oxide plate, domestic demand remains stable, tire sector performance is still good, enterprise feedback orders do not show signs of decline, while chemical orders are still in peak season, order performance is also good, while feed orders performance is slightly worse. On the whole, the downstream consumption of zinc in the future is worth looking forward to.

In terms of black series, the thread is flat, hot coil is down nearly 0.1%, stainless steel is down nearly 1.7%, coke is up nearly 0.2%, coking coal is down nearly 0.2%, iron ore is down nearly 0.3%, thread inventory in Hangzhou this week is 1.078 million tons, month-on-month compared to-7000 tons, year-on-year + 377000 tons. Recently, the high level shock of thread inventory in Hangzhou has not been accumulated continuously. the main reason is that Jiangsu, Anhui and other places are seriously affected by floods, shipping and automobile transportation are limited to a certain extent, and the shipments of local resources to Hangzhou have decreased. Secondly, Hangzhou inventory is close to the peak storage capacity, superimposed by the impact of the rainy season, port ships are inconvenient to unload, due to inventory pressure, some steel mills, such as Yonggang, have reduced shipments to Hangzhou. Finally, the plum gradually emerged from Hangzhou and its surrounding areas this week, and market traders said that terminal demand showed obvious signs of recovery, although it had not yet reached the level of prosperity, but it had made a certain contribution to the elimination of inventory in Hangzhou.

"[SMM thread] what is the impact of the spot market if Hangzhou warehouse wants to charge more for storage?

Crude oil fell nearly 0.8% in the previous period, with the falling dollar and strong u.s. stocks supporting the market hit by weak demand. However, US government data showed that crude oil inventories rose by nearly 5 million barrels last week, refined oil depots rose to their highest level in decades, and gasoline demand was sluggish, suggesting that the coronavirus keeps drivers off the road during the summer peak fuel season. 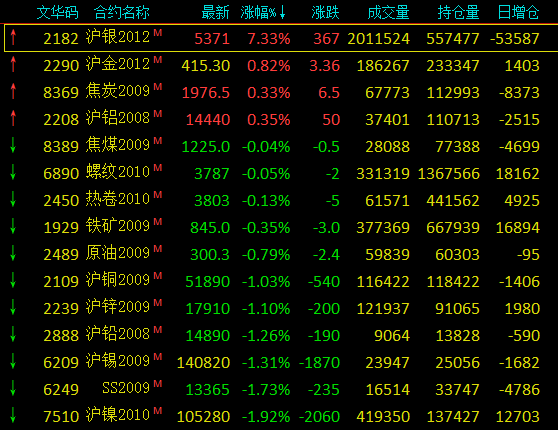 Copper: last night, Lun Copper closed at 6477 US dollars / ton, down 1.31%. The trading volume was 48000 lots, and the long positions were reduced by 621 to 316000 lots. The Shanghai Copper 2009 contract closed at 51980 yuan / ton, down 0.82%. The trading volume was 104000 lots, and the long positions were reduced by 926 lots to 119000 lots. A spokesman for the Chinese Foreign Ministry confirmed yesterday that the US side suddenly asked China to close the consulate in Houston and urged the US side to withdraw the unreasonable decision immediately, otherwise it would reserve the right to counteract. After the news, the market rekindled worries about the tension in Sino-US relations. Lun Copper fell sharply by US $80 / ton in the short term, and assets such as A50 share index futures and European stock markets fell significantly at the same time, followed by a low shock, which fell as low as US $6415.5 / ton in intraday trading. Affected by this negative effect, Shanghai copper opened low at 52100 yuan / ton at night and continued to fall rapidly in the short term after the opening, until the market mood eased at the end of the day, and copper prices rebounded slightly inside and outside the market. On the spot side, the willingness to receive goods downstream is expected to improve after the decline of the market, and it is still in the period of long order delivery, and it is expected that Shengshui will go higher today. It is estimated that today Lun Copper 6470 won 6520 US dollars / ton, Shanghai Copper 51700 won 52000 yuan / ton. It is expected that the spot water will rise to 120 yuan per ton today.

Aluminum: yesterday Shanghai aluminum main contract opened at 14400 yuan / ton in the morning, opened at 14435 yuan / ton, then fell back to a low of 14350 yuan / ton, and then reduced positions rebounded near 14450 yuan / ton; afternoon fluctuations in a narrow range of 14400 Mustang 14450 yuan / ton range, closed slightly at 14390 yuan / ton, trading volume reduced to 79000 hands, position reduced to 113000 hands, daily close of small crosses. The total position in Shanghai Aluminum Futures decreased to 387000 lots, and the trading volume increased to 206000 lots. Last night, the main share of Shanghai Aluminum opened low at 14305 yuan / ton, fell to 14260 yuan / ton at the opening low, then fluctuated at 14300 yuan / ton, began to climb after 23:00, and closed at 14385 yuan / ton at the end of the day. The accumulation rate of inventory is slow, the spot is still rising, and the domestic demand has performed well under the policy stimulus. It is estimated that the main operating range of Shanghai Aluminum today is 14200 RMB14600 / ton.

Zinc: overnight, the main 2009 contract of Shanghai Zinc opened at 17930 yuan / ton. at the beginning of the session, with the market risk aversion rising, short sellers entered and suppressed, Lun Zinc dived downwards. after touching 17575 yuan / ton, the short sellers stopped their earnings and left the market, and Shanghai zinc revised upwards. after a short period of finishing at 17725 yuan / ton, the center of gravity moved up to 17900 yuan / ton, the center of gravity moved up to 17900 yuan / ton, fell slightly after touching a high of 17990 yuan / ton, and finally closed down 17920 yuan / ton, down 190 yuan / ton, or 1.05%. Trading volume increased to 107311 lots, and position increased by 1928 lots to 91013 lots. Overnight, Shanghai zinc recorded Xiaoyin line with a long shadow line, which broke through the support of the 5 / 10-day line, and the positive column of MACD index narrowed. Due to the downward drag of the outer disk, Shanghai zinc stopped Yang and turned negative, escalating tensions between China and the United States heightened market risk aversion, Shanghai zinc regained its downward trend, but downstream demand recovery expectations are expected to limit downside space. Pay attention to China's geopolitical tensions in the short term. The contract price of Shanghai Zinc 2009 is expected to operate in the range of 17,500mur18000 yuan / ton, and it is expected that domestic Shuangyan zinc will increase the water price by 90mur100 yuan / ton in August contract.