In terms of zinc, SMM believes that the rise in zinc prices is mainly due to macro sentiment, supported by optimistic expectations of domestic consumption, strong performance of zinc in Shanghai, short-term zinc prices are expected to be mainly range shocks, and pay attention to the development of Sino-US trade in the short term. In terms of fundamentals, due to the recent rebound in domestic zinc concentrate processing fees, according to SMM research, as of July 17, the domestic zinc concentrate processing fee is 5200 yuan / metal ton, which is 200 yuan / metal ton higher than the lowest point of 5000 yuan / metal ton, superimposed refinery overhaul is completed in the first half of the year, and is in the process of increasing production and resuming production, the follow-up supply is expected to increase month-on-month.

In terms of black, thread rose 1.31%, hot coil rose 0.96%, stainless steel rose 0.59%, coke rose 0.03%, coking coal fell 0.53%, and iron ore rose 1.14%. Recently, heavy rainfall has continued in most parts of the Yangtze River basin, causing floods in many areas. road traffic is almost paralyzed. When people all over the country are generally concerned about whether the affected people have been resettled in time, the vast number of steel traders are also concerned about whether the production and transportation of various steel mills will be affected. SMM Steel has conducted a detailed follow-up and survey of steel mills in the affected areas. Generally speaking, steel mills in Anhui, Hubei, Jiangsu and other areas are relatively seriously affected by floods, and steel output and raw material input are hindered to varying degrees. But hindrance rather than stagnation, at present, only a few steel mills in consideration of their own high inventory factors, choose homeopathic furnace, slow down the pace of production, the production of other steel mills is limited. And with the end of the rainy season, the flood gradually fades and road traffic resumes one after another, the production of the affected steel mills will soon return to normal and will not have much impact on the overall steel supply.

[SMM Steel] how is the production and transportation of the ferocious and thin steel mills now?

Crude oil rose 1.11 per cent in the previous period, while international oil prices fell as industry data showed an unexpectedly sharp rise in US crude oil inventories and a rise in the number of new crown cases in the US could further hit the country's fuel demand. Oil prices rose about 1% last day, hitting their highest level since March 6. Optimism was sparked by the progress of the new crown vaccine and the approval by EU leaders of a 750 billion euro economic fund. On the data side, the (API) report of the American Petroleum Institute shows that U.S. crude oil stocks rose by 7.544 million barrels last week, while they are expected to fall by 1.95 million barrels. The official (EIA) of the US Energy Information Administration will release oil inventory data at 22:30 on Wednesday. The domestic commodity market as a whole is still in a state of net capital inflows, with a net inflow of 1.128 billion yuan in the Mandarin Commodity Index, with nearly 220000 positions added. Brave the wind and waves of precious metals to get 1 billion funds frenzied influx. Chemicals are generally strong, receiving nearly 500 million capital. The oil plate that dived at the end of the day suffered 212 million capital abandonment. 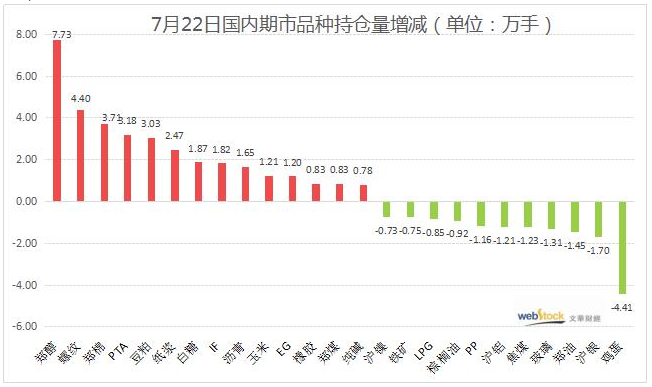 A brief comment on SMM analysts on July 22nd

Copper: today, the main force of Shanghai copper opened at 52490 yuan / ton in the morning. After the opening, the bulls entered the market to push up the copper price to the highest point of the day, 52830 yuan / ton, but then the short positions increased to suppress the copper price, and the long positions continued to fall to 52420 yuan / ton. In the second trading session, the center of gravity of Shanghai Copper was arranged horizontally around 52560 yuan / ton until the midday close. Shanghai copper opened smoothly in the afternoon, fluctuating in a narrow range around 52540 yuan / ton, and fell near the end of the day, and finally closed at 52410 yuan / ton, up 550yuan / ton, or 1.06%. During the day, the number of positions in 09 contracts increased by 6783 hands, mainly as long positions increased; trading volume increased by 7000 lots to 149000 hands. 08 contract day reduced positions by 7283 to 78000, mainly for short positions; trading volume decreased by 40, 000 to 91000. The low interest rate environment superimposed with the sustained stimulus plan kept the macro optimistic tone unchanged, the price of base metals rose sharply, and there was good news from the fundamentals. Chilean miner Antofagasta announced that copper production fell 8.4% month-on-month in the second quarter, adding to market concerns about tight copper supply and providing support for copper prices. Today, Shanghai copper closed, KDJ opening convergence, below still jump off multiple moving averages, technical point of view copper prices still have upward momentum. Wait for the guidance of the outer disk in the evening to test whether the bulls can push again to support Shanghai Copper to hit the 53000 mark.

Aluminum: the Shanghai Aluminum 2008 contract opened at 14400 yuan / ton in the morning, and the long position reduction period fell slightly to an intraday low of 14350 yuan / ton in the first 45 minutes of trading, followed by a correction in aluminum prices, and recorded an intraday high of 14450 yuan / ton at about 11:15 in the afternoon. Afternoon aluminum prices are mainly horizontal finishing, closing at 14390 yuan / ton at the end of the day. 08 contract day position decreased by 3935 to 113228 hands, the Shanghai Aluminum Index position decreased by 12117 to 386891 hands, the daily K closed at a small positive line, an increase of 1.02%, the center of gravity broke through the 10-day moving average, the day is still dominated by short positions. Overall trend, intra-day aluminum prices continue the trend of narrow horizontal market volatility after yesterday's sharp rise. Fundamentals, the current electrolytic aluminum downstream demand is OK, social inventory rebounded slightly, but warehouse receipt inventory is still low. Overall, electrolytic aluminum prices are still supported by fundamentals, and aluminum prices are expected to maintain a stable trend in the short term in the future. Macro aspect: the tension between China and the United States has escalated today, so we need to pay attention to the impact of this incident on the mood of the capital market, and guard against the sharp fluctuations in the capital market caused by changes in sentiment in the capital market.

Zinc: within the day, the main 2009 contract of Shanghai zinc opened at 18225 yuan / ton. at the beginning of the session, zinc rose and fell, and the pressurized daily average line was arranged and operated around 18100 yuan / ton. near the close, stock index futures fell across the board, zinc fell under pressure, and the low hit 17920 yuan / ton. accompanied by some funds to stop earnings and leave the market to cover part of the decline. The final closing price rose to 18025 yuan / ton, up 185yuan / ton, or 1.04%. The trading volume reached 216000 lots, and the position increased by 8103 to 89000 lots. Zinc in the future closed on the positive pillar, mainly driven by capital inflows, zinc smelting production rebounded is not smooth, domestic consumption is more resilient market sentiment is more optimistic, the lower 5, 10-day moving average adhesion support is expected to be effective.

Nickel: the main contract of Shanghai Nickel 2010 opened high at 107700 yuan / ton in daily trading today. After the opening, bulls took advantage of the overnight commodity rally to push up nickel prices, and Shanghai Nickel quickly reached 108420 yuan / ton. Then the bears entered the market to sell pressure, and the bulls also chose to stop the profit and close the position, so Shanghai nickel fell back to the daily average line of 107400 yuan / ton first-line narrow earthquake until the end of the morning market. Open in the afternoon, short positions test, Shanghai Nickel briefly fell 10-day moving average of 107000 yuan / ton after the first line of support to rise back to 107500 yuan / ton. But then, the short selling pressure continued unabated, the lack of confidence in the bulls gradually left the market, and Shanghai Nickel turned around again and finally closed at 106640 yuan / ton. Shanghai Nickel rose 640 yuan / ton today, or 0.6%, trading volume of 797671 lots, position reduced 6906 hands to 124724 hands, today recorded a long shadow small positive pillar, giving up most of last night's increase. It is expected that Shanghai Nickel will still be supported by the 20-day moving average in the near future, constantly testing the upper pressure as the adjustment direction. Sino-US relations have been fragile in recent days. Wait for the direction of the outer disk at night and be cautious about the price fluctuations brought about by macro sentiment.

Tin: Shanghai tin 2009 contract opened at 140110 yuan / ton last night, opened slightly higher after the shock uplink, after the mid-market began to shake, the center of gravity moved down slightly. Opened at 141930 yuan / ton in the morning, opened slightly higher and then fell back, began to shock uplink in the afternoon, rose more than in the afternoon, touched the highest point of 142500 yuan / ton in the day. After reaching the peak, the pullback and concussion went down, closing at 141460 yuan / ton, up 1180 yuan / ton, or 0.84%, with 38475 hands traded, 27569 positions and an increase of 280 hands, showing a positive line. Today, Shanghai tin has not been effectively broken along with the upper part, but the solid part sits firmly below the 20-day moving average, without the lower shadow line, and the lower 20-day moving average support is more stable. Combined with the trend of Lunxi, it is expected that Shanghai tin will stabilize above the 5-day moving average. The upper pressure level is around 142500 yuan / ton.