SMM7 March 21: the whole non-ferrous metals market is red today. by the end of daytime trading, Shanghai lead rose 2.17%, Shanghai zinc rose 1.16%, Shanghai copper rose 0.97%, Shanghai tin rose 0.62%, Shanghai nickel rose 0.32%, and Shanghai aluminum rose nearly 0.04%. In terms of lead, Xinguan vaccine has made a major breakthrough and the United States is planning a new round of epidemic relief, while domestic A shares have soared again, boosting market confidence in the future economic recovery, and macro sentiment has improved, driving lead prices higher to a certain extent. From a fundamental point of view, primary lead, although accumulated last week, but due to cost reasons, refineries and traders more up-price shipments, refinery bulk orders basic reported to Shanghai lead 08 contract flat water to rise to 50 yuan / ton, warehouse receipt supply reported to rise to 50 million yuan / ton. As for recycled lead, due to the high cost of waste batteries, meagre profits or even losses of recycled lead smelters, and generally bullish on lead prices, recycled lead smelters tend to cherish sales, resulting in a tight supply of recycled lead. some of the demand downstream flows to electrolytic lead, boosting the price of lead to a certain extent.

[SMM analysis] lead in Shanghai is expected to continue to strengthen after consolidation in the peak consumption season.

On the black side, threads rose 1.21%, hot rolls rose 1.07%, stainless steel rose 0.97%, coke rose 0.77%, coking coal rose 2.03%, iron ore rose 2.75%, and iron ore futures rose on Tuesday, reflecting optimism in China's stock market and base metals market and shrugging off the impact of increased production by Brazilian miner Vale (Vale) in the second quarter. China's stock market surged 3 per cent on Monday and is expected to rise further after the China Banking and Insurance Regulatory Commission issued a notice that it would set and raise the proportion of differentiated equity asset investment regulation for insurance companies, boosting market sentiment.

Crude oil rose 0.84% in the last period, and the research team released preliminary trial data on three sets of new crown pneumonia vaccines on Monday, including the closely watched Oxford University vaccine. these data boost confidence that the vaccine can train the immune system to recognize and fight the new crown virus without serious side effects. The positive news of the new crown pneumonia vaccine brings some support to oil prices. Because drug manufacturers and medical institutions are eager to find a way to deal with the world's worst health crisis in nearly a century. 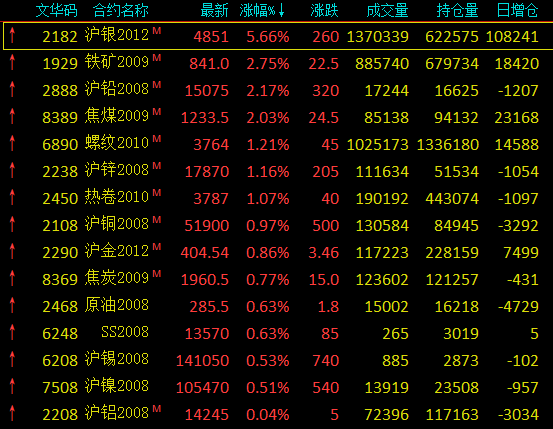 On Tuesday, the overall net inflow of domestic goods was still dominated by net capital inflows, with the Wenhua Commodity Index inflow of 2.418 billion yuan. Precious metals ushered in the explosion, the crazy influx of 2.558 billion funds, of which the skyrocketing Shanghai Bank was highly sought after by 2.023 billion funds, increasing the position by more than 100000 hands. The black department rose sharply across the board and received a 1.964 billion grant of funds. Among them, iron ore is sought after by 1 billion yuan of funds. Oil plate rally temporarily, the heat is not in, encountered 580 million funds abandoned, reduced positions of more than 50, 000 hands. 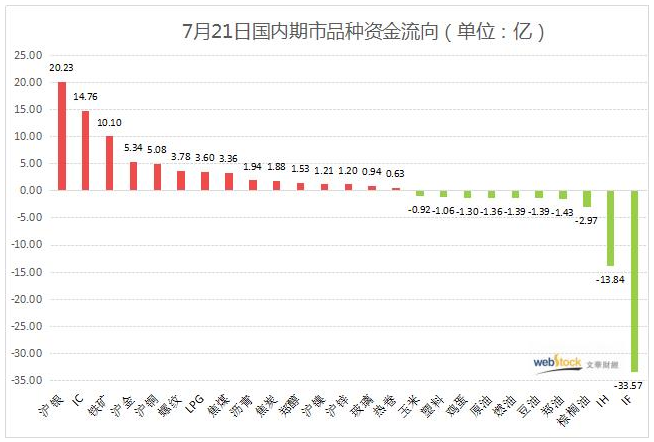 Copper: today, the main force of Shanghai copper opened at 51900 yuan / ton in the morning, the copper price fell slightly after the opening, and then arranged horizontally around the position of 51780 yuan / ton. Bulls continue to increase positions led to copper prices rose slightly to 51950 yuan / ton, but the momentum is insufficient, the market has declined, closing at 51810 yuan / ton at noon. In early afternoon trading, Kongping mostly brought copper prices up slightly to intraday highs of 52040 yuan / ton. After falling about 50 yuan / ton, they fluctuated narrowly around 51910 yuan / ton. In late trading, they closed at 51870 yuan / ton, up 500 yuan / ton, or 0.97%. During the day, the number of positions in 09 contracts increased by 1014 to 113000, mainly by bulls, while trading volume increased by 55000 to 142000. 08 the contract day reduced positions by 3293 to 85000, mainly by short positions, while trading volume increased by 22000 to 131000. Under the dangerous situation of the surge in new crown pneumonia cases around the world, the news that new crown vaccine research had made new progress was reported. Last night, Shanghai copper was boosted by the good news, and then the center of gravity fell back to 51850 yuan / ton level. During the day, copper prices fluctuated around this position. During the day, EU leaders reached a consensus on the economic rescue package, which also boosted market sentiment. Today, the closing of copper in Shanghai, KDJ opening has some convergence, below the 5, 10-day moving average adhesion bottom, the technical side of copper prices still have upward momentum. In the evening, wait for the outer disk guidelines to test whether Shanghai Copper can stand at the 52000 yuan / ton mark.

Aluminum: the Shanghai Aluminum 2008 contract opened at 14250 yuan / ton in the morning, and the opening price continued the downward trend of night volatility, recording an intraday low of 14185 yuan / ton at about 10:10 before noon. Midday aluminum gave up some of the gains, mainly horizontal concussion. In the afternoon, the bulls increased their positions by more than 165hands, and the futures aluminum price reached an intraday high of 14285 yuan / ton. then some bulls reduced their positions and left the market, and some bears hurriedly reduced their positions and left the market at the end of the day. Aluminum futures closed on a positive line, and the closing price was 14245 yuan / ton. 08 contract day position decreased by 3034 to 117163 hands, the Shanghai Aluminum Index position increased by 586 hands to 399008 hands, the daily K closed at a narrow positive line, up 15 yuan / ton, the center of gravity is almost the same as the 5-day moving average, mainly short positions during the day. On the whole, the short game is more intense in the past two days, and Shanghai aluminum prices maintain a horizontal volatility trend. From a fundamental point of view, low inventory, tight supply still gives electrolytic aluminum price support logic unchanged, the current aluminum price support level to 14000 yuan / ton, the downward space is limited. Aluminum prices in the evening are expected to continue the current horizontal volatility trend.