As for lead, as of July 17, the total inventory of SMM lead ingots in the five places reached 47700 tons, up 29900 tons from May 8. Lead prices have erased a wave of gains since July 7 under the pressure of a receding stock boom and rising stocks of lead ingots. SMM believes that at present, due to the decline in lead prices, and waste battery prices remain high, recycled lead smelters maintain a capital preservation state, recycled refined lead stickers have shrunk, refineries show cherished sales sentiment, some just need to return to the primary lead, but the primary lead enterprises are overhauled and returned to normal production, and downstream consumption is afraid of falling cautiously, it is expected that the social inventory of lead ingots will continue to rise this week.

In terms of black, thread rose by nearly 0.6%, hot coil by nearly 0.7%, stainless steel by nearly 1%, coke by nearly 1%, and coking coal and iron ore by nearly 2.2%. The inventory of 35 ports tracked by SMM in the current period totaled 102.9 million tons, an increase of 1.48 million tons from the previous month and a decrease of 4.2 million tons from the same period last year. In this period, the increase in the inventory of imported mineral ports expanded, and the month-on-month growth of Shandong and Tangshan main ports showed an increasing trend. At the same time, the average daily dredging volume of the port fell by 55000 tons to 2.811 million tons compared with the previous month. Most steel mills continue the on-demand procurement strategy, leaving Hong Kong for a short-term or difficult to see a substantial increase. Although the last period of SMM statistics of iron ore arrival decreased slightly compared with the previous period, there is still a pressure on the port in some ports, and the inventory of imported ore ports is still expected to continue to increase in the later period.

SMM believes that short-term iron ore in the case of absolutely low inventory, prices are also high during the year, while the current long-process steel mill operating rate remains high, strong demand, the market has no obvious incentive to take the initiative to reduce production. It is predicted that after the current high falls in the short term, if there is no other external news stimulation, the imported mining market will fluctuate mainly this week or at a high level.

The previous period of crude oil rose nearly 1.6%. On Monday, the electronic trading price of WTI August crude oil futures closed up 0.05%, or 0.12%, at 40.80 US dollars per barrel. Oil prices were little changed on Monday, dragged down by the rise in the number of new crown cases in many countries, but boosted by a series of positive news about candidates for the new crown vaccine and ongoing negotiations on the EU recovery fund aimed at boosting the economy.

In terms of precious metals, Shanghai gold rose nearly 0.5 per cent and Shanghai silver rose nearly 3.1 per cent as demand for safe haven was supported by a surge in new crown virus infections and expectations of increased stimulus measures. Some analysts point out that the current exponential increase in gold's popularity is entirely due to all inflationary factors: yield curve, money printing, economic concerns and epidemics; when you see something happening in a bull market, you will want to buy in a pullback. 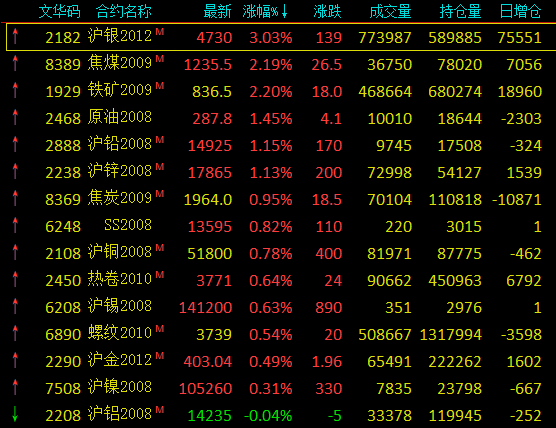 Copper: last night, Lun Copper closed at 6474.5 US dollars / ton, up 0.58%. The trading volume was 13000 lots, and the short positions were reduced by 3060 to 316000 lots. The Shanghai Copper 2009 contract closed at 51850 yuan / ton, up 1.07%, the trading volume was 72000 lots, and the long positions increased by 384 lots to 89000 lots. Copper prices rose and fell last night, breaking through the 6500 mark in the outer market and as high as 52340 yuan / ton in the inner market, but then a short-term pullback in copper prices recovered some of the evening gains. Yesterday, A shares recovered 3300 points, and the market expected the EU to reach an agreement on the recovery fund, the news led to an improvement in market sentiment and varying degrees of gains in risky assets. On the other hand, there has been a surge in new crown infections, with safe-haven demand driving gold to new highs and spot silver up more than 3 per cent, limiting the rise in copper prices to some extent. Copper prices are expected to continue to rise in the short term, driven by supply risks and capital. Spot aspect, this week enters the long order delivery period, the market also tends to be stable, the spot rising water is easy to rise but difficult to fall. It is estimated that today Lun Copper 6470 won 6530 US dollars / ton, Shanghai Copper 51800 won 52200 yuan / ton. It is estimated that the spot water is 60 yuan / ton today-120 yuan / ton.

Lead: Lun lead 20 moving average near the support, short-term is expected to be mainly shock consolidation, follow-up attention to the overall market macro environment changes. Shanghai lead stopped falling and stabilized, with the arrival of peak season expectations, lead prices short power is not strong, short-term consolidation is expected to continue to strengthen. The price of lead in SMM1# is expected to rise by 100,150 yuan per ton today.

Zinc: overnight, the main 2009 contract of Shanghai Zinc opened at 17660 yuan / ton. At the beginning of the session, Shanghai Zinc opened low and moved high, and the center of gravity quickly moved up to 17775 yuan / ton. then, driven by the outer disk, Shanghai Zinc also shook up 17960 yuan / ton, and bears gradually entered the market at high positions. Shanghai Zinc gave up some of its gains, and the center of gravity moved down to 17800 yuan / ton consolidation, and finally closed up at 17815 yuan / ton, up 190yuan / ton, up 1.08%, and the trading volume increased to 73619 hands. Position increased by 2742 hands to 81279 hands. Overnight, Shanghai zinc received a bare foot positive column, the upper Bollinger Road upper rail formed a compression, the lower part was far away from each long moving average, and the KDJ index was opened and expanded downwards. Driven by the outer disk overnight, Shanghai zinc rose first and then suppressed it. The overseas macro-economy is positive, the economic restart process is advancing, the exports of some end products have improved slightly, the superimposed infrastructure plate projects in some parts of the country have been landed one after another, and the market is optimistic about the rebound in demand to boost the trend of Shanghai zinc. However, the continued fermentation of Sino-US and Sino-British trade relations also limits the upward trend of Shanghai zinc. The contract price of Shanghai Zinc 2009 is expected to operate in the range of 17,500mur18000 yuan / ton, and it is expected that domestic Shuangyan zinc will increase the water price by 110Mel 120 yuan / ton in August.

Nickel: Shanghai Nickel 2010 main contract showed a trend of rising and falling in the night market yesterday. Shanghai Nickel Night Market opened at 105690 yuan / ton, briefly rose to 106000 yuan / ton after opening, then fell under pressure. Soon after, Shanghai Nickel backed against the 20-day moving average and rose again, reaching a maximum of 106720 yuan / ton. Then the bears entered the market to sell pressure, Shanghai Nickel turned downward, constantly giving up all the increases in the night market, turned more green at the end of the day, and finally closed at 105500 yuan / ton. It fell 130 yuan / ton, or 0.12%. Last night Shanghai nickel rebound blocked after still retreating to the 20-day moving average, today or concussion in 105000 Mel 107000 line, long and short both sides continue to play the game.