[SMM global epidemic data tracking] A total of more than 13.8 million cases have been confirmed worldwide! There are a total of 2 million confirmed breakthroughs in Brazil and 1 million in India.

A total of 3.57 million cases were confirmed in the United States, with a record number of new cases in a single day on the 16th.

The epidemic in the United States has occurred one after another, and there have been obvious signs of a second outbreak since early June. The number of new people in a single day far exceeds that of the first wave of the epidemic from March to April, and the rising medical records have led to a shortage of medical resources in many places. When will the United States, which is mired in the epidemic, be able to extricate itself from the difficulties? As one of the most developed countries in the world economy, what kind of impact the five-month plight of the epidemic in the United States will have on the world situation will be one of the topics that countries pay most attention to.

A total of 2 million cases of breakthrough have been diagnosed in Brazil.

According to epidemic data released by Johns Hopkins University in the United States, as of 16:00 on July 17, a total of 2.012 million cases and 76688 deaths have been confirmed in Brazil. On 16 July, there were 45000 new confirmed cases in Brazil.

Up to now, the daily increase in Brazil has shown a slow upward trend, and the diagnosis of the Brazilian president has dealt a great blow to the overall mood of the country. In addition, on the afternoon of the 15th, the governor of the eastern Brazilian state of Sergippe announced that his new crown test result was positive. This is the ninth governor in the country to be diagnosed with new crown pneumonia since the outbreak of the new crown epidemic in Brazil. Central and South America, represented by Brazil, is experiencing a large-scale new crown virus attack, which is difficult to prevent and control, and vaccine research and development may become the last "straw".

A total of 1 million cases of breakthrough have been diagnosed in India.

According to epidemic data released by Johns Hopkins University in the United States, as of 16:00 on July 17, a total of 1.003 million cases and 25602 deaths have been confirmed in India. On 16 July, there were 34000 new confirmed cases in India.

At present, the epidemic in India is still in a state of high growth, and it has long been expected that a total of 1 million cases have been confirmed. Due to the backward medical, health and education conditions in some parts of India, it is difficult to prevent and control the epidemic, and medical injuries occur frequently. The large-scale spread of the epidemic has also led to restrictions on local economic and social activities. In order to prevent and control the epidemic, Pune, the second largest city in Maharashtra, will impose a 10-day blockade from July 13; the satellite city of Tana in Mumbai has also extended the current blockade to July 19.

At present, the global epidemic situation is still in a high growth trend, and repeatedly set new highs in a single day, and there are signs of a second outbreak in some countries where the epidemic situation has slowed down, such as Australia and Canada, which has also brought tremendous pressure on the prevention and control of the epidemic at home and abroad. The global cause of getting rid of the crown in the future still needs the joint efforts of governments, ordinary people and vaccine research and development teams. 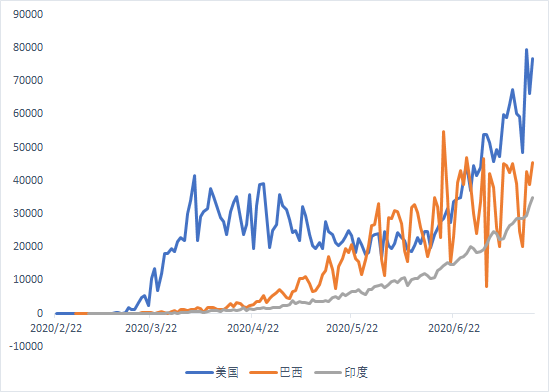