On the news, Glencore (Glencore) 's Mopani copper mine in Zambia said on Thursday that the Zambian Ministry of Mines rejected its proposal to suspend operations. The Xinguan epidemic and low copper prices prompted the company to propose a moratorium on production, which was rejected by the Zambian Ministry of Mines. Mopani said it would appeal against the decision of Zambia's minister of mining and would continue mining operations pending the outcome of the appeal process.

In terms of threads, as of July 16, the national total inventory of building materials was 10.7401 million tons, with a month-on-month ratio of + 0.6%, compared with the same period last year. Seasonal interference has not faded, central China, East China, southwest and other areas are still shrouded in overcast and rainy weather, terminal demand continues to be suppressed, so the thread inventory is still in a state of accumulation. However, after South China took the lead in "getting rid of difficulties", the strong replenishment of local demand is an important argument to prove the objective existence of the demand for quick work. The urgent demand for work is more urgent than in previous years, and the terminal just needs a good year-on-year performance, which is an important reason why the current inventory growth continues to narrow year-on-year (this week, the thread pool growth rate narrowed by 3 percentage points year-on-year).

"[SMM thread] the road to fatigue is not over, and the upward trend in steel prices is not over.

Crude oil fell nearly 1.3 per cent in the previous period, US oil ended a two-day rally on Thursday, the OPEC+ alliance's decision to scale back production cuts and US data showing a slow recovery in the labour market underscored the weak outlook for oil demand. After nearly three months of historic production cuts to mitigate the impact of the coronavirus pandemic, the OPEC+ Alliance plans to increase supply by at least 1 million barrels a day in August.

In terms of precious metals, Shanghai gold fell nearly 1% and Shanghai silver fell nearly 1.7%. On Thursday, gold prices fell, spot gold fell off the 1800 mark, brushing the recent two-day low to 1794.98 US dollars per ounce, and the sharp rebound in the dollar index put gold prices under pressure. Edward Moya, senior market analyst at brokerage OANDA, said the main theme was that the central bank would stay put for some time and there would be more stimulus, but much later, which partly undermined the recent bullish trend in gold. 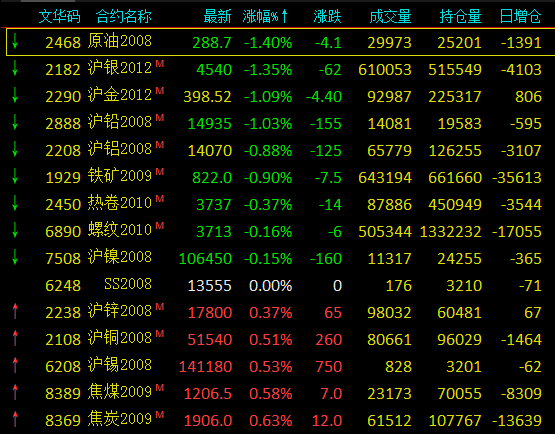 Copper: last night, Lun Copper closed at 6410 US dollars / ton, up 0.24%. The trading volume was 18000 lots, and the long positions increased by 2671 to 314000 lots. The Shanghai Copper 2009 contract closed at 51470 yuan / ton, up 1.7%, the trading volume was 58000 lots, and the long positions increased by 2981 lots to 112000 lots. Last night stabilized and rebounded, Lun Copper moved from the US $6350 first-line operation center to above the 6400 mark, Shanghai Copper also repaired upward after opening, and then fluctuated around 51500 yuan / ton. Copper prices fell more this week, as there is still support on the supply side, the pullback attracted bulls to actively enter the market, and copper prices stabilized and rebounded yesterday. However, on the macro side, due to the increase in the number of new crown infections, the sharp rebound in the dollar index, risk aversion in the market, and the pressure on oil prices after OPEC reduced production, copper prices are expected to lack upward momentum today. Spot aspect, after the market decline alleviated, the downstream buying interest rebounded, and the rising water is expected to rise steadily today. It is estimated that today Lun Copper 6370 RMB6430 / ton, Shanghai Copper 51250 RMB51550 / ton. It is expected that the spot water will rise to 40 RMB50 / ton today.

Lead: overnight, Lun lead opened at US $1839.5 / ton. During the Asian session, the overall metal weakened, Lun lead fluctuated down, reaching a low of US $1824 / ton. After entering the European period, Lun lead rebounded and recovered its decline, and finally closed at US $1839.5 / tonne, down 0.76%. Lun lead high decline, the overall trend has not changed the upward trend. Overnight, Shanghai lead opened at 14950 yuan / ton, Shanghai lead basically around the daily moving average near the shock, light overnight trading, finally reported at 14910 yuan / ton, an increase of 0.13%. There is support near the Shanghai lead 20-day moving average, pay attention to the technical position support strength in the short term.

Zinc: overnight, the main 2009 contract of Shanghai Zinc opened at 17725 yuan / ton. At the beginning of the session, Shanghai Zinc opened low and moved high, the center of gravity quickly moved up, and then it was driven up along the daily moving average. Shanghai Zinc also showed a strong performance, fluctuating above the daily moving average, touching up 17970 yuan / ton, but the bulls were afraid of high, short-sellers were waiting for an opportunity to enter, Shanghai Zinc went down under pressure, gave up some of the gains, the center of gravity moved to 17905 yuan / ton horizontal finishing, and finally closed up at 17865 yuan / ton. It rose 160 yuan / ton, or 0.9%. The trading volume decreased to 61188 lots, and the position increased by 2578 to 85504 lots. Overnight Shanghai zinc received a bare foot in the positive column, the upper Bollinger Road on the rail to form a compression, the lower 10-day moving average to provide support, MACD index Yang column narrowed. Overnight, Shanghai Zinc was also strong driven by the upside of the outer disk, and overseas and domestic economic data boosted market confidence. However, the continued fermentation of Sino-US trade relations limited the upside of Shanghai Zinc. Pay close attention to the development and changes of Sino-US trade relations in the short term. The contract price of Shanghai Zinc 2009 is expected to operate in the range of 17,500mur18000 yuan / ton, and it is expected that domestic Shuangyan zinc will increase the water price by 90mur110yuan / ton in August contract.

Nickel: overnight Shanghai Nickel 10 contract opened as high as 106530 yuan / ton last night, and the daily market fell sharply affected by the sharp fall in A shares, and the decline in the night market recovered somewhat. After opening, bulls reduced a large number of positions, Shanghai Nickel slightly fluctuated upwards, and then bulls followed up. Shanghai Nickel rose to a night high of 107320 yuan / ton, the 20-day pressure average fluctuated back to 107350 yuan / ton, and the center of gravity moved down to 107000 yuan / ton level, fluctuating narrowly. In late trading, it operated under pressure until closing at 106920 yuan / ton, up 750 yuan / ton, or 0.71%, compared with the previous trading day, and the trading volume was 376000 lots. The position decreased by 3304 hands to 139000 hands. Shanghai Nickel closed at Xiaoyangzhu last night, the 5-day moving average was downward and the 10-day moving average was above the K-column to form a cross pressure position, and the K-column was supported by the middle rail of the Boll line. Today, we pay attention to the resistance of the pressure lines above Shanghai Nickel.