SMM7 March 16: today, non-ferrous metals fell across the board. By the end of the day, Shanghai Aluminum fell 3.52%, Shanghai Copper fell 3.24%, Shanghai lead fell 3.12%, Shanghai Nickel fell 2.32%, Shanghai Tin fell 1.74%, Shanghai Zinc fell 0.92%, and the metal market suffered a Waterloo. Shanghai Copper and Shanghai Aluminum took the lead. Previously, non-ferrous metals led by Shanghai Copper have repeatedly hit phased highs, and Shanghai Copper has reached a two-year high, which has something to do with the optimism brought about by the sharp rise in the stock market at the beginning of the month. However, today, the A-share market plummeted across the board, with the Prev down more than 4%. Pessimism transmitted to domestic industrial products. The metal market already had a high-level decline, and the decline accelerated in the afternoon.

In terms of black series, thread fell 0.96%, hot coil fell 0.77%, stainless steel fell 1.51%, coke rose 0.05%, coking coal was flat, iron ore fell 0.84%, news surface, according to Linfen environmental protection released on July 16, in recent years, with the continuous deepening of air pollution prevention and control work in our city, the ambient air quality continues to improve, but the average annual concentration of carbon monoxide (CO) is still at the bottom. It has become an important factor affecting ambient air quality. The iron and steel industry is one of the main sources of carbon monoxide emissions in our city. To carry out comprehensive control of carbon monoxide in the iron and steel industry and effectively control carbon monoxide emissions is very important to continuously improve the atmospheric environmental quality of our city. To this end, the Municipal Bureau of Ecological Environment is advanced in the country, referring to the experience of Tangshan and Handan in Hebei Province, inviting technical units such as the Metallurgical Industry Planning and Research Institute to participate in the joint research, extensively solicit the opinions of enterprises, and formulated and issued the "Linfen Iron and Steel Industry CO Comprehensive Management implementation Plan (trial)" to start the CO governance of the iron and steel industry.

Crude oil fell 1.79% in the previous period, and allies such as the Organization of Petroleum Exporting countries (OPEC) and Russia have reportedly agreed to ease record oil supply cuts from August as the global economy slowly recovers from the new crown pneumonia epidemic. OPEC said production cuts would be officially reduced to 7.7 million barrels a day from August until December. Although some oil-producing countries with early overproduction will take compensatory production reduction measures, there are still some production gaps that cannot be made up. Under the trend of a certain increase in crude oil supply, the rebound in demand is a key factor determining the trend of oil prices in the near future. The demand for crude oil is highly related to the epidemic, so the global epidemic remains an important concern for investors. 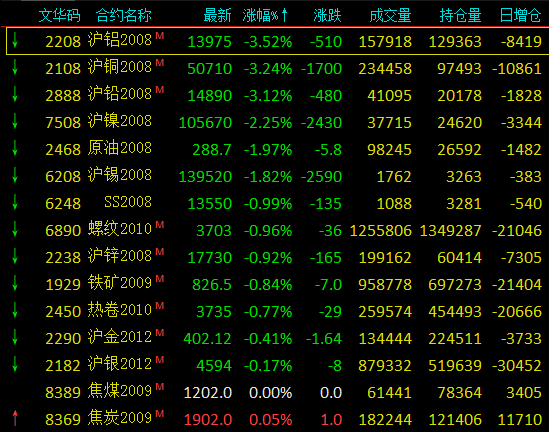 In terms of capital flow, there is a serious loss of blood in domestic commodities today, and the outflow of funds from the Mandarin Commodity Index is nearly 3.5 billion. The non-ferrous plate bore the brunt, with 2.388 billion funds fleeing in the day, of which Shanghai Copper lost 1.104 billion yuan. Stock index futures have also been abandoned by funds, with a total loss of more than 3.5 billion yuan for the three major varieties. 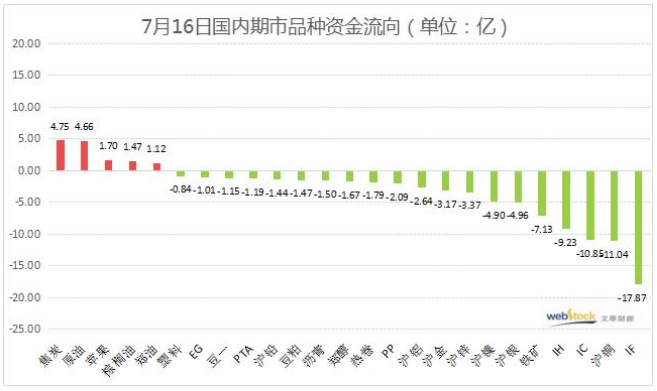 A brief comment on SMM analysts on July 16th

Copper: today, the Shanghai Copper 09 contract opened at 51230 yuan / ton in the morning. After the opening, the copper price of the bulls fell briefly, and then the bulls entered the market one after another, driving up the copper price and exploring the intraday high of 51340 yuan / ton. With the air level more in, the disk fell slightly, closing at 51090 yuan / ton at noon. Open in the afternoon, multi-air forces stalemate, Shanghai copper continued the concussion trend. Copper prices went all the way down from 51070 yuan / position, probing into the intraday low of 50580 yuan / ton, and closed slightly back in late trading, closing at 50710 yuan / ton, down 1780 yuan / ton, or 3.4%. During the day, 09 contracts reduced positions by 1949 to 109000, showing a long reduction in positions, while trading volume increased by 75000 to 167000. 08 contract day reduced positions by 10861 to 97000, showing a long reduction, while trading volume increased by 87000 to 234000. At present, Shanghai Copper still maintains the back structure, and the contract price difference of 08mur09 is about 50 yuan / ton. Copper concussion in Shanghai fell today, running below the daily moving average. Recently, tensions in Sino-US relations have further escalated. The US said it would impose visa restrictions on specific employees of Chinese technology companies, including Huawei, as global investors worried that another deterioration in trade relations between the two countries would hurt the economy and put pressure on copper prices when macro sentiment cooled. In addition, the fall in oil prices today also dragged down the price of copper. The fundamentals have not changed much. Today, Shanghai copper closed negative, giving up the previous three days of gains, MACD red column significantly shrank, close to the 10-day moving average below, waiting for the outer disk guidelines in the evening to test whether Shanghai Copper can return to the 51000 mark.

Lead: within a day, the 2008 contract for Shanghai lead is opened at 15145 yuan / ton. In early trading, after Shanghai lead rose slightly to an intraday high of 15175 yuan / ton, with the Shanghai Composite Index falling all the way, it was adjusted horizontally by the first line of support of 14900 yuan / ton in the afternoon, closing at 14890 yuan / ton, down 480 yuan / ton, or 3.12%. The position decreased by 1828 to 20178, and the trading volume increased by 22737 to 18358. Shanghai lead closed the Changyin line, falling below the 5-day moving average and 10-day moving average one after another. Due to a sharp correction in the Shanghai and Shenzhen stock markets, long funds have been evacuated one after another, and Shanghai lead once again fell into the gap of 14395 yuan / ton in the Spring Festival. It is still doubtful whether the 20-day moving average can be maintained at night. In addition, 07 contract delivery was completed, 08 contract became the same month's contract, the main force transferred to the distant month, 08 contract position decreased sharply, 09 contract position increased by 625 hands to 17669 hands.

Zinc: within the day, the main 2009 contract of Shanghai zinc opened at 17750 yuan / ton, and zinc was temporarily arranged at the beginning of the day, running at the bottom of the daily moving average near the opening price. In the afternoon, the stock market trend was bleak, and risk aversion warmed up. Many heads gradually fled, and zinc concussion weakened and hit a bottom of 17555 yuan / ton. Later, an attempt was made to correct that the daily moving average fell back again, and the high zinc walk at the end of the session recorded a W shape during the departure period. The final close fell 17675 yuan / ton, down 195 yuan / ton, down 1.09%. Trading volume increased by 46407 lots to 147000 lots, and positions decreased by 4698 lots to 82926 lots. Zinc in the future received a big positive pillar falling back with a long shadow line, the stock market commodities are in a comprehensive correction, and the zinc decline is relatively limited. The current spot market demand and the limited growth rate expected in the week of social inventory constitute a certain support, but the relationship between big countries is not optimistic to disturb the market sentiment. Zinc or weak shock operation in the evening.

Nickel: the main 2010 contract of Shanghai Nickel opened at 107820 yuan / ton in the morning market, showing a shock and slow downward trend at the beginning of trading. After briefly stopping near the high of 107500 yuan / ton and then gradually falling and away from the daily average line, the afternoon market closed at around 106500 yuan / ton. The afternoon market opened to accelerate the decline, probing down 105200 yuan / ton, almost touching the lower 20-day moving average, the short positions pulled back, the market recovered to a low level, and returned to above 106000 yuan / ton in late trading. It closed at 106170 yuan / ton, down 2520 yuan / ton, or 2.32%. The position reached 142000 lots, a decrease of 2920 lots, and a turnover of 938000 lots, an increase of 247000 lots. There has been a significant reduction in positions in contracts in recent months today, with a total reduction of 8517 positions in 2008 and 2010, with each contract falling by more than 2 per cent. The main contract today fell below the 5-day, 10-day moving average, pointing to the 20-day moving average, the decline was alleviated, giving up the rally since last week. Today, A shares plunged 4.5%, dragging down the commodity market is green, the early bulls escape from the market, short-term homeopathy crackdown, technical indicators are weak. In the evening, Ruolun Nickel can stop falling and stabilize, and Shanghai Nickel will also continue to seek support at the 20-day moving average.