In terms of zinc, the recent strong rise in zinc prices accelerated after breaking through the previous shock platform on July 8, rising as high as 18455 yuan / ton in intraday trading, an increase of 1710 yuan / ton. by the close of July 15, zinc price had fallen to 17855 yuan / ton. The main reason for this rise is: 1. The whole world is under water, and the macro-positive situation has promoted a general rally in stock markets and commodities. Copper, aluminum and lead in non-ferrous metals have all filled the gap after the whole year, and only zinc and nickel have not returned to their previous price levels. Market funds have made up the logic to push zinc prices up strongly. 2. The market remains optimistic about infrastructure consumption during the year, believing that higher-than-expected consumption will occur in the peak season.

Crude oil in the previous period fell nearly 0.1 per cent, while US crude oil rose nearly 2 per cent on Wednesday, supported by a sharp drop in US crude inventories last week, but further upward constraints as the (OPEC) and its allies plan to reduce production cuts from August as the global economy gradually recovers from the new crown virus pandemic.

In terms of precious metals, Shanghai gold fell nearly 0.1%, while Shanghai silver rose nearly 0.2%. A weaker US dollar supported gold prices, but the rise in European and American stock markets limited the rise in gold prices. The plunge in u.s. inventories pushed oil prices up 2%, but OPEC+ plans to reduce production cuts, and oil prices have risen by a limited amount. 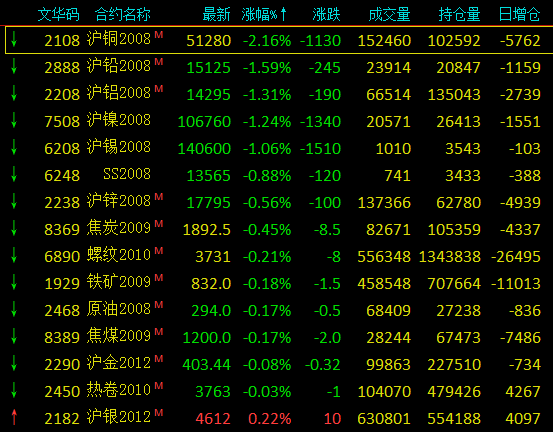 Copper: last night, Lun Copper closed at US $6394.5 / ton, down 1.62%. The trading volume was 21000, and short positions increased by 1999 to 311000, while the Shanghai Copper 2009 contract closed at 51220 yuan / ton, down 1.75%. The trading volume was 88000 and the short positions increased by 295 to 111000. Yesterday's copper price correction was mainly affected by the weakening pressure of A shares, superimposed on the recent decline in the number of newly diagnosed people in Chile, supply concerns have been alleviated, and copper prices have been revised back in the context of a large increase in the previous period. However, at the macro level, progress in vaccine development led to a rebound in US stocks, with the US dollar index refreshing its five-week low below 96, indicating an improvement in market risk sentiment, and copper prices are expected to be supported today. On the spot side, the willingness to receive goods downstream improved after the copper price fell, and the spot rising water is expected to rise slightly today. It is estimated that today Lun Copper 6380Rue 6440 US dollars / ton, Shanghai Copper 51100PUE 51500 yuan / ton. It is expected that the spot water will rise to 30,000,000 yuan / ton today.

Aluminum: yesterday, the main 2008 contract of Shanghai Aluminum opened at 14465 yuan / ton in the morning, with a slight fluctuation at the opening, and then a narrow range fluctuated in the range of 14450 million yuan / ton; in the afternoon, it rose slightly to around 14560 yuan / ton, then fell and vomited back the increase, finally closing at 14475 yuan / ton, the trading volume was reduced to 120000 hands, the position was reduced to 138000 hands, and the daily line was Xiaoyin. The total position in Shanghai Aluminum Futures was reduced to 407000 lots, and the transaction volume was reduced to 232000 lots. Shanghai Aluminum opened at 14485 yuan / ton in night trading, fell more than 100 yuan at the start of trading, then continued to decline, trading as low as 14240 yuan / ton, and closed at 14305 yuan / ton at the end of the day. Market optimism dissipates slightly, part of the funds profit to understand the withdrawal, the spot end is still high water, the futures price is supported, the main operating range of Shanghai aluminum is expected to be 14,100mi 14500 yuan / ton.

Lead: overnight, Shanghai lead opened at 15390 yuan / ton. At the beginning of trading, Shanghai lead fluctuated lower, reaching a low of 15055 yuan / ton, then stopped falling steadily, basically running in a narrow range of 15120 yuan, and finally reported at 15110 yuan / ton, down 1.53%. Shanghai lead high decline upward trend slowed, the future focus on the support near the 10th line.

Zinc: overnight, the main 2009 contract of Shanghai Zinc opened at 17885 yuan / ton. At the beginning of the day, the outer disk was dragged down, and the short sellers also gradually entered and suppressed. Shanghai Zinc concussion fell all the way down to 17500 yuan / ton. The bulls entered at the low level, the bears stopped their earnings and left the market, and the Shanghai zinc went up higher, the backfilling part decreased, the center of gravity moved up to 17710 yuan / ton, the center of gravity at the end of the plate moved up slightly, arranged along the daily moving average line, and finally closed down at 17750 yuan / ton, down 120 yuan / ton. The trading volume decreased by 0.67 yuan / ton to 81397 lots, and the position decreased by 1340 lots to 86284 lots. Overnight, Shanghai zinc recorded a small negative column, falling below the 5-day moving average, providing support below the 10-day moving average, pressing the upper track of Bollinger Road, and narrowing the red column of the MACD index again. Overnight, Shanghai zinc opened high and left low, non-ferrous general fell superimposed the outer disk downward drag, and the uncertainty of Sino-US currencies and Sino-US trade relations, market panic intensified, Shanghai zinc performance was weak, but the market expectations for strong consumption of infrastructure construction are expected to limit the downward space of Shanghai zinc. The contract price of Shanghai Zinc 2009 is expected to operate within the range of 17400 Mel 17900 yuan per ton. It is expected that domestic Shuangyan Zinc will rise 60 RMB80 per ton in the August contract.

Nickel: the overnight Shanghai Nickel 10 contract opened at 108680 yuan / ton last night. Last night, the Shanghai Nickel contract was dominated by short positions. At the beginning of the day, the Shanghai Nickel pressure daily average fell below 107000 yuan / ton to 106870 yuan / ton. It was supported to rebound to a narrow range of 108000 yuan / ton above the daily average line until the close, and finally closed at 107970 yuan / ton. Compared with the previous trading day, the settlement price fell by 107970 yuan / ton, or 0.55%. The trading volume was 511000 hands. The position increased by 1189 hands to 147000 hands. Overnight, Shanghai nickel closed in the long lower shadow line Xiaoyin column, the K-column station was in the range of 5 / 10 moving average, and the shadow line went down to the 20-day moving average. Today, we will pay attention to the support situation of Shanghai Nickel 108000 gate.