SMM7 March 15: today, non-ferrous metals collectively turned green during the day, with Shanghai zinc leading the decline. By the end of the day, Shanghai zinc fell 1.24%, Shanghai aluminum fell 0.72%, Shanghai lead fell 0.68%, Shanghai tin fell 0.61%, Shanghai nickel fell 0.41%, and Shanghai copper fell 0.36%. In terms of copper, the Candelaria copper mine in Chile, run by Canadian miner Lundin??Mining??Corp, on Tuesday rejected claims of layoffs by the mine watchdog, saying it was related to the early retirement of older miners. The watchdog said on Monday that the project would cut 7 per cent of its staff in an effort to cut costs. Chile's mining industry is feeling the pressure from restrictions on its operations to limit the spread of the virus. Candelaria said the measure was part of an "optimization plan" to ensure the sustainability of its operations in the Atacama region of northern Chile.

In terms of nickel, the futures nickel is high, the turnover of spot pure nickel is light; the shortage at the mine end continues, the market price is not available; the supply and demand of nickel and iron is in a relatively balanced state for the time being, and the market price is stable; the higher stainless steel futures slightly stimulate the spot price, and the market turnover is general. At present, metal prices are in a strong state under financial stimulus, although it is not easy for nickel prices to break through the upper platform due to the lack of fundamentals, and there are more air operators, but it is difficult to have a sharp correction trend in the short term, and high-level shocks are expected to dominate.

In addition, the big trading house announced today that it has been decided that from August 1, 2020 to March 31, 2021, it will be exempted from the delivery fee for all futures varieties (including the standard warehouse receipt period cash transfer fee).

The previous period of crude oil rose 0.58%. It is reported that the OPEC+ production cut in June exceeded the requirements of the agreement, making the oil price firm and expected to rise by US $40. Focus on the outcome of tonight's OPEC+ meeting. Bitumen and LPG in the crude oil plate rose nearly 2 per cent. Due to the significant reduction in the arrival time of LPG this month. Recently, with both refinery and terminal inventory falling, refinery importers have a strong mentality under no inventory pressure for the time being, and the futures market continues to hit new highs, widening the basis once again to the level of 1,000 yuan. 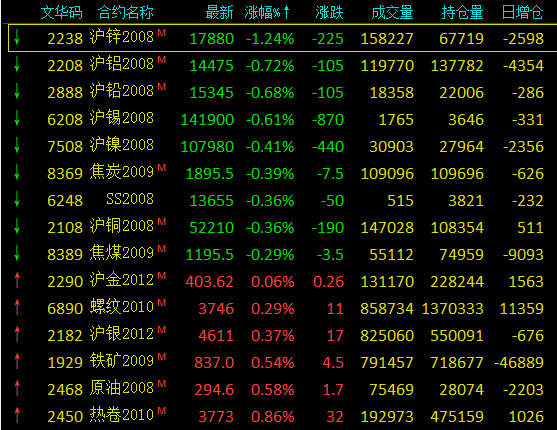 In terms of capital flow, there is an outflow of 557 million yuan from the domestic commodity market today. Black varieties suffered a sell-off, in which the number of iron ore reduced positions ranked first among commodities, with a capital loss of more than 700 million yuan. The chemical sector as a whole showed a net outflow of funds, but methanol was popular with funds, earning 356 million yuan in a day. Index funds are still divergent, with IC spitting out 2.424 billion of its capital and IF gaining 1.361 billion of its capital.

A brief comment on SMM analysts on July 15th

Copper: today, the Shanghai Copper 09 contract opened at 52520 yuan / ton in the morning. After the opening, the bulls increased their positions and pulled up the copper price in the short term, exploring a daily high of 52700 yuan / ton, but then the short positions increased to depress the copper price, and the long positions continued to fall to 52260 yuan / ton. At this time, Kongping more copper prices rebounded, the center of gravity around 52430 yuan / ton position shock adjustment, until the midday close. Opening in the afternoon, bulls entered the market to drive up the copper price to 52610 yuan / ton, but the upward momentum was insufficient, and the market fluctuated and fell. At the end of the day, the bulls made a profit and left the market, and the market declined rapidly, closing at the lowest point of the day, 52120 yuan / ton, down 260 yuan / ton, or 0.5%. During the day, the contract reduced its position by 734 to 110000, showing a long reduction in position, while the trading volume decreased by 36000 to 92000. The copper concussion in Shanghai fell during the day, mainly due to the cold macro mood. At present, the number of confirmed cases of the new crown epidemic continues to rise to nearly 13.5 million, and the escalating crisis of the new crown epidemic has further overshadowed the prospects of economic recovery. in addition, with increasingly strained relations between China and the United States, Trump publicly "persuaded" the European Union to boycott Huawei on the grounds of trade policy. with the United States escalating its crackdown, the British government announced today that it will stop buying new Huawei equipment and dismantle used Huawei equipment by 2027. In this case, risk aversion in the market re-accumulated, copper prices fell under pressure. Today, Shanghai copper negative, KDJ opening expansion, but the lower averages are still long arrangement, copper price callback space is limited. In the evening, waiting for the outer disk guidance, test Shanghai copper rose again to recover the decline. Today, the Shanghai Copper 2007 contract faces delivery. It opened at 52210 yuan / ton and closed at 52280 yuan / ton, up 150 yuan / ton, or 0.29%. It was settled at 52410 yuan / ton, with a position of 3240 lots and a delivery volume of 16200 tons.

Lead: during the day, the main 2008 contract of Shanghai lead opened at 15410 yuan / tonne. As Shanghai lead failed to reach 15440 yuan / ton twice at night, bulls reduced their positions one after another in early trading. Shanghai lead fell below the daily average line and adjusted horizontally along the line of 15375 yuan / ton. Near noon, Shanghai lead fell all the way to the intraday low of 15310 yuan / ton. In the afternoon, the basic metal generally rose, and Shanghai lead rebounded, but it was blocked by the intraday moving average. Several attempts to break through were fruitless. It finally closed at 15345 yuan / ton, down 20 yuan / ton, or 0.13%. The position decreased by 286 to 22006, and the trading volume decreased by 16146 to 18358. Affected by the adjustment of the Shanghai and Shenzhen stock markets, the overall trend of Shanghai lead today is mainly shock, with trading volume reduced by nearly half, and the KDJ index also shows convergence, but there is still some distance below the k line from the 5-day moving average, and the overall center of gravity has not yet moved significantly downward. it is expected that Shanghai lead will be supported by the 5-day moving average in the short term. It should be noted that today's Yuanyue 09 contract and the main 08 contract price difference has been reduced to 60 yuan / ton, the main funds further backward. In addition, the 07 contract closed at 15455 yuan / ton today, with a settlement price of 15605 yuan / ton, 6820 positions and 34100 tons of delivery. today, the warehouse receipt inventory increased by 5395 tons to 38493 tons, and the 07 contract completed smooth delivery.