SMM7 March 10: this morning, the non-ferrous metals market is red, fat, green and thin. By midday trading, Shanghai zinc rose 1.61%, Shanghai lead rose 1.34%, Shanghai aluminum rose 1.27%, Shanghai copper rose 0.46%, Shanghai nickel fell 0.94%, and Shanghai tin fell 1.04%. In terms of nickel, there is less fundamental correlation among the leading factors in the recent market. The fundamentals of nickel are weak but mostly known news, such as the increase in the supply of nickel pig iron and the pressure on stainless steel market shipments in the off-season, etc., as a whole, the short-term contradiction is not obvious; in the macro aspect, some overseas data are bright, on the major link, we can see that overseas is still following the logic of consumer recovery, coupled with the policy support of enterprises in various countries have a certain effect, the relative preference of the macro side; under the comprehensive effect, the performance range of nickel price fluctuates. The overnight Shanghai Nickel 10 contract closed at the Zhongyin column last night, and Shanghai Nickel fell below the 5 / 10 moving average, testing the position of 105000 yuan / ton pass below the shadow line. Today, we will pay attention to the support situation of this pass.

On the black side, threads fell 0.11%, hot coil fell 0.03%, stainless steel fell 0.33%, coke fell 1.6%, coking coal fell 0.7%, iron ore rose 0.44%, according to the Australian Port Authority. Australia's iron ore exports to China from Port Hedland, the world's largest export, climbed to a record 46.2 million tons in June. Shipments were up 7 per cent from 43.18 million tonnes in May and 10 per cent from the same month last year, according to the data. Port Hedland is used by three of Australia's four largest iron ore miners: BHP Billiton Group, Fortescue Metals and Gina Rinehart's Roy Hill. However, at the end of the Australian fiscal year this month and the opening of the annual routine maintenance, shipments in Australia and Brazil fell month-on-month.

The previous period of crude oil fell 2.21%, investors worried that the United States to curb the spread of the virus to re-implement blockade measures will once again reduce fuel consumption. The United States reported more than 60000 new cases on Wednesday, setting a one-day record for all countries. According to an analysis, 42 of the 50 states in the United States have seen an increase in the number of new cases in the past two weeks. The renewed rise in the number of new cases has prompted states such as California and Texas to re-impose restrictions. The new restrictions could undermine any sustained recovery in fuel demand. 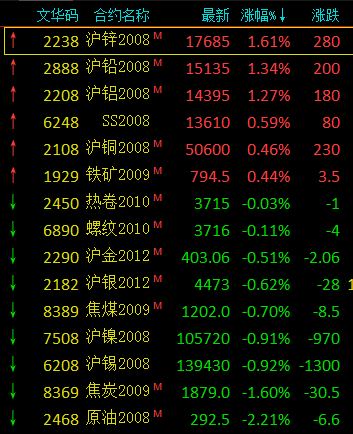