In terms of lead, in terms of fundamentals, in terms of primary lead, in July, Henan Yuguang gold and lead was in a state of replacement production line, and its output was further tightened; while some smelters, such as Chihong in Yunnan and Shuikoushan in Hunan, were overhauled, and the production of primary lead was expected to decline in July. In terms of recycled lead, the profits of recycled lead enterprises have been repaired, the production enthusiasm of smelters is high, and the demand for waste batteries is rising, which makes the supply of waste batteries still tight and it is difficult to increase production. Overall, the supply side is tightening. At the consumer end, the inventory pressure of lead-acid battery products is transferred to dealers. At present, dealers still mainly digest inventory, lack of support for lead consumption, and the lower reaches mostly favor the deep water supply of recycled lead, so the demand for primary lead is limited. In addition, it is worth noting that the position in the 07 contract in that month was maintained at nearly 8000 hands, while the warehouse receipt inventory was only less than 20, 000 tons, which was a serious mismatch, and the price difference between the 07 contract and the main 08 contract further widened to around 390 yuan / ton. To sum up, SMM believes that the supply side of primary lead is slightly tight, and downstream consumption is basically in the state of digesting inventory, but it is affected by capital disturbance, and warehouse receipt inventory is seriously insufficient, and the overall trend of Shanghai lead is strong in the short term.

"[SMM analysis] are all rising in Shanghai, and I can't hold back any more lead! The end of Wulianyin pulled a new high.

In terms of zinc, in terms of fundamentals, on the supply side, on the domestic side, in July, the inventory level of raw materials in domestic smelters returned to normal. At present, the average inventory of raw materials is about 28 days, and the problem of shortage of raw materials in smelters has been basically solved. Mainly to resume work and return to production. The overhaul of the smelter in July is less, and the domestic refined zinc output is expected to increase by 26400 tons to 491800 tons in July compared with the previous month. At present, the consumption of zinc downstream is in the off-season, and there is no bright performance on the consumer side. As for galvanizing, due to the recent rainy season affecting the start of some projects, galvanized pipe terminal orders are lower than before. In terms of structural components, due to the recovery of the epidemic, the iron tower project is basically based on the rush order of last year's project, and many bidding projects have not yet started this year, resulting in a gap in the middle. At present, the tower order is weak. Due to the influence of overseas epidemic situation, external demand orders for die-casting zinc alloy and zinc oxide plates have not improved. Taken together, the trend of zinc prices depends on the choice of funds, boosted by macro optimism, hot money continues to pour into the market, vigilant against the situation in China and the United States and tightening domestic monetary policy in the future. But the fundamentals are empty and it is recommended to wait and see.

"[SMM analysis] despite the fundamentals, hot money poured into Shanghai and zinc surged by more than 4%!

In terms of black series, threads fell by nearly 0.7%, hot rolls by nearly 0.4%, stainless steel by nearly 0.9%, coke by nearly 1.7%, coking coal by nearly 0.7%, iron ore by nearly 0.2%. In terms of threads, the main snail opened high and went low yesterday, close to closing up again, closing up 1.31%, the spot market quotation rose for the fifth day in a row, and each market rose by 2040 yuan / ton. However, it was affected by the weakening of the snail in the intraday session, and the trading atmosphere was cooler than that of yesterday. In terms of hot coil, the total inventory of hot-rolled coil this week is 3.6332 million tons, with a month-on-month ratio of + 1.89% and + 8.5% compared with the same period last year. Production of hot rolls this week has increased compared with the previous period, but under the stimulus of a sharp rise in volume, the market turnover is better than last week. In the context of increased supply and strong stable demand, the hot volume continued to be burdened with reserves, and the growth rate was more stable than that of the previous period.

Crude oil fell nearly 2 per cent in the previous period, while US oil fell more than 3 per cent yesterday to its lowest level in more than a week, as the economic outlook was bleak due to an increase in coronavirus cases and impending layoffs in the US. Several companies, including Wells Fargo, will announce massive layoffs, while production at the Messla field resumes, potentially increasing global supply amid continued weak demand. Demand is in jeopardy as the United States, Brazil and other countries continue to be hit by the epidemic. Us gasoline inventories fell by 4.8 million barrels last week, far more than analysts had expected, with demand climbing to 8.8 million b / d, the highest level since March 20, according to data released by the US Energy Information Administration (EIA).

In terms of precious metals, Shanghai gold fell nearly 0.5% and Shanghai silver fell nearly 0.6%. Spot gold fell yesterday, falling more than $20 from a daily high to a daily low of $1795.75 / oz, with a record number of new cases in a single day in the United States. the fall in the stock market triggered profit-taking of gold, and investors sought to avoid the dollar, reducing the demand for gold as an alternative asset. Analysts pointed out that gold prices were quite overbought after breaking through $1800 an ounce, and now we are seeing some investors selling gold, and the dollar is also rising slightly, which is also putting pressure on gold prices. But there are no fundamentals that have led to a fall in gold prices. 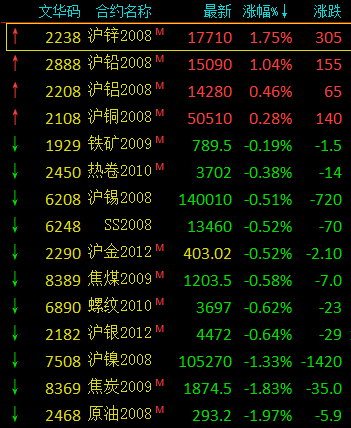 Copper: Lun Copper closed last night at US $6297 / ton, up 0.98%, with a turnover of 23000 lots, while bulls increased their positions by 3611 to 303000 lots. The Shanghai Copper 2008 contract closed at 50490 yuan / ton, an increase of 0.24%. The trading volume was 80, 000 lots, and the bulls reduced their positions by 3682 to 117000 lots. Panlun copper surged as high as $6360 a tonne yesterday afternoon before a pullback began at night and fell short of more than $60 a tonne around 22:00. After opening high, copper prices in Shanghai also adjusted downwards until copper prices stabilized and rebounded at the end of the day. Last night's copper price correction was mainly affected by the sharp increase in the number of new crown cases in the United States. Last night, US stocks fell sharply by 3% of crude oil prices to put pressure on copper prices, reining in the recent rally. The epidemic situation in South America is still an important support for supply pressure, but the return of Sino-US trade relations is expected to put pressure on risky assets in the short term, and copper prices are expected to face pullback shocks today. On the spot side, the market was afraid of heights yesterday, and traders shipped at reduced prices for high prices, and it is expected that there is still room for a pullback today. It is estimated that today Lun Copper 6250PY 6320 US dollars / ton, Shanghai Copper 50300PUE 50700 yuan / ton. It is expected that the spot discount today is 10-litre 30 yuan / ton.

Aluminum: yesterday, the main 2008 contract of Shanghai Aluminum opened at 14165 yuan / ton in the morning, slightly adjusted in the range of 14130, 14230 yuan / ton, and then broke through the upstream; it rose in the afternoon, fluctuating in the range of 14240 Mel 14320 yuan / ton, and finally closed at 14290 yuan / ton, the trading volume was reduced to 114000 hands, the position was reduced to 162000 hands, and the daily line closed at Xiaoyang, and the center of gravity continued to move up. Shanghai aluminum futures held a total of 429000 lots, and the trading volume was reduced to 227000 lots. The main force of Shanghai Aluminum opened slightly higher at 14295 yuan / ton in night trading, then fell back after opening to 14330 yuan / ton, adjusted at 14230 yuan / ton, pulled up slightly and closed at 14255 yuan / ton at the end of the day. At present, the smelting end has considerable profits, but the price of raw materials has an upward trend, while low social inventory and tight cash in circulation support aluminum prices. It is expected that the main operating range of Shanghai aluminum will be 14,100Mel 14400 yuan / ton today.

Zinc: overnight, the main 2008 contract of Shanghai zinc opened at 17545 yuan / ton. At the beginning of the session, Shanghai zinc fluctuated in a narrow range along the line of 17525 yuan / ton. During the period, it briefly touched the intra-day high of 17585 yuan / ton and tried to break it many times. During the session, short sellers increased capital and cracked down. Shanghai zinc tried to break up and down after diving. Under pressure, Shanghai zinc fell down 17375 yuan / ton again, and bulls entered the market for bargains. Shanghai zinc concussion recovered some of the decline, and at the end of the session. The center of gravity moved to the vicinity of 17480 yuan / ton, and finally closed up at 17530 yuan / ton, up 125 yuan / ton, or 0.72%. The trading volume decreased to 102854 lots, and the position decreased by 4225 to 88443 lots. Overnight Shanghai zinc recorded a small Yin line, the lower Bollinger Road on the track support, jump off the lower averages, KDJ index opening expansion, the technical side is bullish. Macro positive to enhance risk appetite, Shanghai zinc in the high shock operation, but the fundamentals are weak to limit the upside space of Shanghai zinc. Be on guard against changes in the situation between China and the United States recently. It is expected that the contract price of Shanghai Zinc 2008 will run within the range of 17,100,000,000 yuan / ton. It is expected that the domestic Shuangyan zinc will rise 50 million yuan / ton in the August contract.

Nickel: overnight Shanghai Nickel 10 contract opened at 107900 yuan / ton, the overnight dollar index rose sharply, the price of crude oil fell simultaneously. Shanghai Nickel followed the decline at night. At the beginning of trading, it fluctuated all the way down below the daily average line, and the first line of 107200 yuan / ton was supported for short-term consolidation. Then the rate of decline increased, and then rebounded to the position of 106000 yuan / ton after falling 105080 yuan / ton. The center of gravity fluctuated narrowly around this position until the close, and finally closed at 105610 yuan / ton, down 2020 yuan / ton, or 1.88%, than the settlement price of the previous day. The trading volume was 604000 hands. The position decreased by 5442 hands to 140000 hands. The overnight Shanghai Nickel 10 contract closed at the Zhongyin column last night, and Shanghai Nickel fell below the 5 / 10 moving average, testing the position of 105000 yuan / ton pass below the shadow line. Today, we will pay attention to the support situation of this pass.