In terms of copper, the epidemic continues to spread in South America, with a total of more than 300000 confirmed cases in Chile. The Chilean National Copper Mining Workers Association released news that a large number of miners and workers in major copper mining enterprises in Chile have diagnosed new crown pneumonia, with a total of more than 3500 confirmed cases. Worries about tight copper supply in the market have fermented again, supporting copper prices to rise. Thousands of Chilean copper workers infected with Xinguan El Teniente Copper Mine 1044 cases of current economic policy liquidity continues to be loose, the Federal Reserve Meester said that it will maintain a loose monetary policy and will take more action to support the economic recovery, and the macroeconomic environment continues to boost market risk appetite, which is good for copper prices.

With regard to zinc, Teck Resources announced on the 7th that on July 3, 2020, one of the two main transport barges in the Red Dog mine loading port broke down, and the loading barge of the second transport barge in the port had been tested, and the second transport barge was able to maintain normal operation, which did not cause related personnel injury or environmental impact. However, this incident will affect the pace of its shipment. according to Teck resources, the maintenance of the faulty barge will be completed in the next 4 weeks, and the shipment of the, Red Dog mine will be carried out in the next 7 days under the condition that only one shou barge is put into operation, which will affect the delivery time to customers. However, Teck Resources believes that despite such mechanical accidents, the, Red Dog mine is expected to ship all its products within the shipping season unless there is unforeseen bad weather. Red Dog Mine is one of the top ten zinc mines in the world, with an annual output of 552400 tons in 2019. Overall, the production of, Red Dog mine has not been affected, only mine shipments have been affected, the impact on zinc prices is limited, but in the context of a sharp rise in market risk appetite, this event constitutes an emotional positive for the zinc market.

[SMM analysis] the influence of Red Dog ore transportation on zinc is limited.

In terms of black, thread rose nearly 1%, hot coil rose nearly 1.2%, stainless steel rose nearly 0.2%, coke rose nearly 0.7%, coking coal rose nearly 1.3%, iron ore rose nearly 1.3%. Since the beginning of this week, the stock market has risen sharply, and market sentiment has picked up somewhat. Superimposed by the news that the Brazilian president was unfortunately infected with the new crown, the market worried about the contraction of the ore supply side and rekindled the enthusiasm for long ore. Today, the iron ore 09 contract increased by 53000 hands, or 2.74%, and continued to lead the rise in black. Rebar futures also broke through 3700 points, reaching a seven-month high. At present, the contraction of the supply side of steel mills is still continuing. according to the latest research data of SMM, as of July 7, the operating rate of independent electric arc furnace steel mills reached 73.24%, down 4.49% from the same period last week and 11.52% from 84.76% in the same period in June. On the demand side, the market is generally worried that the rainstorm and the college entrance examination will affect the release of short-term demand, but from the actual transaction data, the release of demand is not pessimistic. Driven by strong futures, traders are enthusiastic about replenishment. The trading volume of building materials in the past two days is more than 250000 tons. Once the late weather comes out, demand is expected to recover strongly.

[SMM analysis] the operating rate of blast furnace has dropped for four consecutive weeks, and the market has rebounded sharply as scheduled.

The previous period of crude oil fell slightly, and the US WTI August crude oil futures closed up 26 cents, or 0.64 percent, at 40.88 U.S. dollars per barrel on Wednesday (July 8). Oil prices closed higher on Wednesday as U.S. gasoline consumption showed signs of recovery, but rising crude oil stocks and rising cases of coronavirus infections limited oil prices. Us gasoline stocks fell by 4.8 million barrels and demand climbed to 8.8 million b / d, the highest level since March 20, according to data released by the US Energy Information Administration (EIA) on Wednesday. Capacity utilization at refineries has increased by two percentage points, but it is still about 17 per cent lower than in the same period last year.

In terms of precious metals, Shanghai gold rose nearly 0.6 per cent and Shanghai silver rose nearly 1.9 per cent as central banks launched strong stimulus measures to mitigate their impact on the economy as investors sought to avoid the risk of a new coronavirus epidemic. Analysts point out that fiscal and monetary stimulus measures, as well as inflows into gold-backed exchange traded funds (ETF) and other investments, are underpinned; continued liquidity injections into the market continue to be the most prominent positive, as the dollar has been weakening and supporting commodity prices, particularly gold and silver. 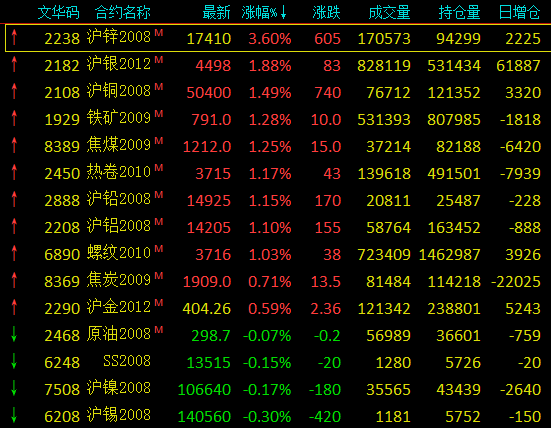 Copper: last night, Lun Copper closed at 6236 US dollars / ton, up 0.69%. Trading volume was 17000 lots, and bulls increased their positions by 3149 to 299000 lots. The Shanghai Copper 2008 contract closed at 50180 yuan / ton, an increase of 1.05%. The trading volume was 54000 lots, and the bulls increased their positions by 1133 to 119000 lots. Last night, Lunn copper began to pull up before the US market, quickly breaking the 6200 mark, while Shanghai copper also moved higher after the opening, breaking through the 50, 000 mark, as profit trading understood that copper prices fell in the short term, but the long throw dominated and then continued to rise. Copper prices rose last night mainly due to heightened concerns about the stability of Chilean copper supply. At present, the number of copper mine infections in Chile has exceeded 5000, covering more than 60 per cent of annual production capacity. Copper prices continue to rise supported by good supply. On the macro side, policy easing is expected to continue to drive U. S. stocks higher, domestic A shares also strong risk aversion sentiment fell back to a two-week low of the dollar, resonating with the copper market. On the spot side, due to the lack of copper imports this week, even if the supply is on the low side, even if the disk is pulled up, the price-raising sentiment of the consignors is not reduced, and it is expected that the spot price will remain stable today. It is estimated that today Lun Copper 6210 won 6270 US dollars / ton, Shanghai Copper 49900muri 50300 yuan / ton. It is expected that the spot water will rise to 30 RMB50 / ton today.

Aluminum: overnight, Shanghai lead opened at 14840 yuan / ton. At the beginning of the session, Shanghai lead, driven by Lun lead, strengthened rapidly, reaching a high of 14980 yuan / ton. After overseas diving, Lun lead gave up its rise and finally reported an increase of 0.54% at 14830 yuan / ton. The overall trend of Shanghai lead is on the strong side, and it was once high near Wanwu overnight. Today, we are concerned about whether Shanghai lead can effectively break through the Wanwu pressure.

Lead: yesterday, Shanghai Aluminum's main 2008 contract opened at 13995 yuan / ton in the morning. After making a slight adjustment below Wansi, it went up with the increase of positions, and quickly pulled up and then stood at 14100 yuan / ton. In the afternoon, it fell first and then rose, fluctuating in the range of 14110 Mustco 14170 yuan / ton, finally closing at 14150 yuan / ton, trading volume increased to 124000 hands, position remained at 164000 hands, and the daily line closed at Xiaoyang, recovering the previous day's decline. The total position in Shanghai Aluminum Futures increased to 430000 lots, and the trading volume increased to 233000 lots. The main force of Shanghai Aluminum opened slightly higher at 14205 yuan / ton at night, then fell back to fill the gap after opening to 14240 yuan / ton, closing at 14160 yuan / ton. Domestic macro mood is good, raw material prices are rising, imported aluminum ingots have an obvious impact on domestic spot, inventory may stop accumulating, and the main operating range of Shanghai aluminum is expected to be 14000 million yuan / ton today.

Zinc: overnight, the main 2008 contract of Shanghai zinc opened at 17160 yuan / ton. At the beginning of the session, many positions poured in, Shanghai zinc quickly pulled up, and the center of gravity moved up to 17420 yuan / ton narrow finishing. Then the outer disk uplink was driven. Shanghai zinc slightly moved up by 17495 yuan / ton. Many attempts to break failed, optimism reined in, the center of gravity of Shanghai zinc moved slightly down to 17400 yuan / ton fluctuation, short positions at the end of the market, bulls stopped profits and left the market. The center of gravity of Shanghai zinc was slightly adjusted to 17360 yuan / ton for consolidation, and finally closed up at 17315 yuan / ton, up 510 yuan / ton, or 3.03%. Trading volume surged 52789 lots to 144863 lots, and positions increased by 1808 lots to 93882 lots. Overnight, Shanghai received a positive pillar, with a long shadow line, jumped off the lower averages, successfully broke through the suppression of the upper track of Bollinger Road, and expanded the positive pillar of the MACD index. Overnight non-ferrous metal rose, Shanghai zinc rose to a five-month high, mainly due to the macro upside of the stock market continued to rise, optimism boosted risk appetite, hot money continued to pour into the market, providing conditions for the strength of Shanghai zinc, it is suggested that the market should be cautious to short. The contract price of Shanghai Zinc 2008 is expected to operate in the range of 17000 Mel 17500 yuan / ton, and it is expected that domestic Shuangyan Zinc will increase the water price by 70muri 80 yuan / ton in August.

Nickel: the overnight Shanghai Nickel 10 contract opened at 107500 yuan / ton last night. the opening fluctuated downwards. after falling below 107400 yuan / ton, the position became a pressure level, and the position was under pressure near the 107100 yuan / ton line, and then it was supported and concussed to rebound. The previous decline was recovered to a night high of 107800 yuan / tonnage, and then the bulls reduced their positions and shorts followed up. Shanghai Nickel's center of gravity went down to 107300 yuan / ton, and after a narrow range consolidation, it continued to give up the increase at night to the early low. The downward pressure was insufficient, so at the end of the day, short positions in Shanghai Nickel rebounded slightly near the daily average, and finally closed at 107150 yuan / ton, down 380 yuan / ton, or 0.35%, from the previous day's settlement price, with a turnover of 332000 lots and a position increase of 7304 lots to 145000 lots. The overnight Shanghai Nickel 10 contract closed at the small negative column last night, and the K-pillar waist passed through the Boll line. This week, the K-column basically extended the Boll line to run on the track, and the three tracks of the Boll line were far away from each other. There is support near the lower 5-day moving average of 107000 yuan / ton. Today, we will pay attention to whether Shanghai Nickel can effectively break through the 107500 yuan / ton pressure level on the Boll line again.