In terms of copper, the China solid waste Chemicals Management Network issued the ninth batch of restricted list in 2020, which is the first batch of approval documents in the third quarter, of which the total approved import of copper scrap is 176746 tons, and the first batch is 222020 tons in the second quarter, down 20.39% from the previous quarter. The overall approval shows a quarterly downward trend, which is in line with the plan of the Ministry of Ecology and Environment to reduce the import of solid waste in the second half of the year. According to SMM, the recent price advantage of scrap copper rod compared to refined copper rod is very huge, and the order is maintained well. The 100, 000-ton scrap copper rod factory wants to open more production lines to reduce the average cost, but it suffers from the shortage of scrap copper raw materials, and the demand for raw materials is doubled by opening one more production line (open hearth capacity of 150t / day). At present, the overall supply of scrap copper is still limited by imports and cannot support full production for a long time. At present, a new batch of approval documents have just been issued, the volume of scrap copper is relatively sufficient and the price advantage is obvious, the short-term import of scrap copper supply will undoubtedly increase. If the copper price is stable as a whole, it will continue to be conducive to the production of scrap copper rods and will further extrude refined copper rods for consumption.

In terms of lead, according to the SMM survey, the operating rate of primary lead and recycled lead increased synchronously, and the supply of lead ingots tended to be relaxed, especially in the recycled lead plate. Since last week, the price of lead has risen sharply, the profits of recycled lead have been repaired, and the discount of recycled refined lead has expanded rapidly. as of July 7, recycled refined lead has been quoted as an average discount of 250 yuan / ton for SMM1# lead, with some as low as 400 yuan / ton. The absolute advantage of recycled lead in price has attracted a large number of downstream just need diversion, and the accumulation of electrolytic lead is expected to rise further, giving more holders room to buy cash (delivery brands). It will stimulate the transaction activity of the spot market before delivery and give the smelter the opportunity to reduce inventory pressure.

In terms of black, iron ore rose nearly 2.6%, coke rose nearly 1.7%, thread rose nearly 1.5%, hot coil rose nearly 1.4%, coking coal rose nearly 0.6%, stainless steel rose nearly 0.3%. According to SMM research, as of July 7, the operating rate of independent electric arc furnace steel mills reached 73.24%, down 4.49% from the same period last week and 11.52% lower than that of 84.76% in June. In the later stage, the operating rate of electric arc furnace is afraid to maintain the current low level, so it is difficult to have room to pick up. On the one hand, in the case of scrap resources are still tight, prices are likely to remain strong. On the other hand, affected by the weather, terminal demand shows regional differences-in the short term, heavy precipitation still hangs over the gathering areas of electric arc furnace production capacity in East China, Southwest China and Central China, and the release of demand in these areas is still suppressed to a certain extent. although the shipping situation of merchants is slightly better than the previous period, it is difficult to promote the effective digestion of relevant city inventory and electric furnace factory warehouse, and it is even more difficult to pull up steel prices.

In terms of precious metals, Shanghai gold rose nearly 0.5 per cent and Shanghai silver rose nearly 0.1 per cent as the jump in the number of new cases boosted hopes for looser monetary policy measures and safe-haven demand for gold. 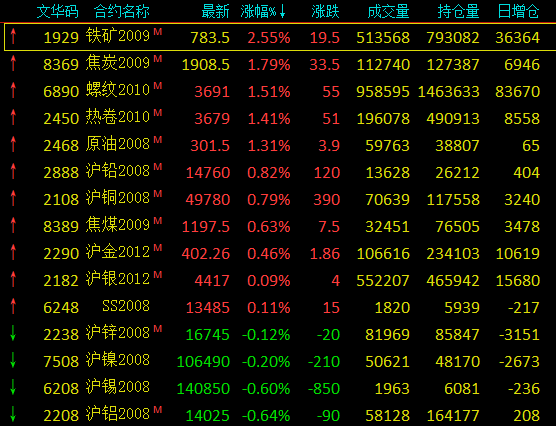 Copper: last night, Lun Copper closed at 6193 US dollars / ton, up 0.86%. The trading volume was 17000 lots, and the long positions increased by 1819 to 296000 lots. The Shanghai Copper 2008 contract closed at 49830 yuan / ton, an increase of 0.95%. The trading volume was 56000 lots, and the long positions increased by 1867 lots to 116000 lots. Yesterday, the copper price was pulled up in the night market after stepping back, and the operation center continued to move up, and the copper in Shanghai was close to 50000 yuan / mark. The recent rise in copper prices is mainly supported by the strong supply side, Chilean copper mine production uncertainty is due to the accumulation of epidemic factors, the market is worried about the supply of bulls continue to enter the market. On the macro front, the Bank of England expects asset purchases of 750 billion pounds by the end of the year, and the US government hopes to pass another stimulus package by the first week of August. Although the resumption of the economy has been suspended in some areas, policy easing continues market optimism. On the spot side, although the market rose yesterday, the influx of imported copper was less, inventories are still low, and traders are expected to be in a rising water mood. It is estimated that today Luntan 6150lu 6220 US dollars / ton, Shanghai Copper 49700Mutual 50100 yuan / ton. It is estimated that the spot water is 20 yuan / ton today-40 yuan / ton.

Aluminum: yesterday, the main 2008 contract of Shanghai Aluminum opened at 14175 yuan / ton in the morning, then reduced its position rapidly, and continued to fall after a slight adjustment of 14100 yuan / ton; it fell first and then rose in the afternoon, and the intraday low touched the 10,000 round mark, and rebounded slightly in late trading. the final closing fell at 14060 yuan / ton, the trading volume increased to 112000 hands, the position decreased to 164000 hands, the daily line closed at Xiaoyin, and the price fell from the high. The total position in Shanghai Aluminum Futures decreased to 429000 lots, the trading volume increased to 206000 lots, and some bulls left the market at a profit. The main force of Shanghai Aluminum opened slightly lower at 14045 yuan / ton in night trading, broke 10,000 yuan at the opening, and fell to 13945 yuan / ton. After that, it rebounded slightly to close at 13995 yuan / ton. Spot market performance is poor, the basis fell sharply, aluminum ingot inventory in some areas began to accumulate, pay attention to the lower 10-day moving average support, the main operating range of Shanghai aluminum is expected to be 13900Mel 14200 yuan / ton.

Nickel: the overnight Shanghai Nickel 10 contract opened at 107290 yuan / ton yesterday, and immediately explored the 107000 yuan / ton mark after opening, then the long positions increased sharply, Shanghai nickel fluctuated upwards, 107600 yuan / ton was under pressure and then continued to rise slightly, probing 108420 yuan / ton. After short-term consolidation, the bulls were not strong enough to leave the market. Shanghai Nickel gave up all its overnight gains to 106820 yuan / ton and finally closed at 107160 yuan / ton. The settlement price rose 90 yuan / ton compared with the previous trading day. The volume increased by 0.08% to 407000 lots, and the position increased by 7949 lots to 139000 lots. The overnight Shanghai Nickel 10 contract closed at the long shadow line Xiaoyin column yesterday, and the Boll line and the 5-day moving average under the k-pillar were supported. Today, we are concerned about whether Shanghai Nickel can hold the 107000 yuan mark.