CST
translation
Source:SMM
[arbitrage space continues to narrow when does the import of recycled aluminum ingots stop? The ninth batch of restricted solid waste approvals was released today, which is consistent with the feedback from enterprises last week. The number of Q3 waste aluminum approvals is the same as that of Q2, so it is highly probable that this approval Q4 will be greatly reduced. In addition, the new standard proposed by the Nonferrous Metals Association has been approved and originally scheduled for implementation on July 1, but it has not yet landed, and the exact implementation is still unknown, so there is uncertainty about the import of waste aluminum in the later stage.

Customs statistics show that from January to May this year, China's net exports of aluminum and aluminum products decreased by 790000 tons compared with the same period last year, of which unwrought aluminum flowed into 274000 tons. At the same time of the sharp rise in domestic aluminum prices, domestic and foreign aluminum prices have also been upside down, the import window of aluminum products has been opened, and the import volume of unwrought aluminum has increased significantly. Overall, both internal and external demand is weak, coupled with the impact of imported aluminum alloy ingots, the traditional off-season recycled aluminum industry is facing a cold winter again. In terms of waste aluminum, waste aluminum recyclers generally feedback that the transaction is not good, and the quotation is stable, mainly because the aluminum price is on the high side and the enthusiasm of receiving goods downstream is greatly weakened.

On the spot side, the spot price in Shanghai was between 14410 and 14420 yuan / ton yesterday, while the price in Wuxi was between 14430 and 14450 yuan / ton, which was slightly higher than that on Friday, and the rising water fell sharply to 50 yuan / ton of rising water. The supply tension in Wuxi market increased yesterday, and the price quoted by the holder was very strong, but relatively speaking, the supply in Shanghai area was more relaxed, and the price was 20 yuan / ton lower than that in Wuxi area. A large family normally announced its purchase plan, but the actual receipt of goods in Shanghai area was on the high side. Although the middleman is willing to accept the goods, it is more difficult to reach an agreement with the holder on the price, and the two sides have reached a stalemate. From a fundamental point of view, the decline in social inventory of aluminum ingots further narrowed yesterday, with a strong willingness to stand price at the supply end, and downstream on-demand procurement, in line with the previous short-term aluminum price forecast. 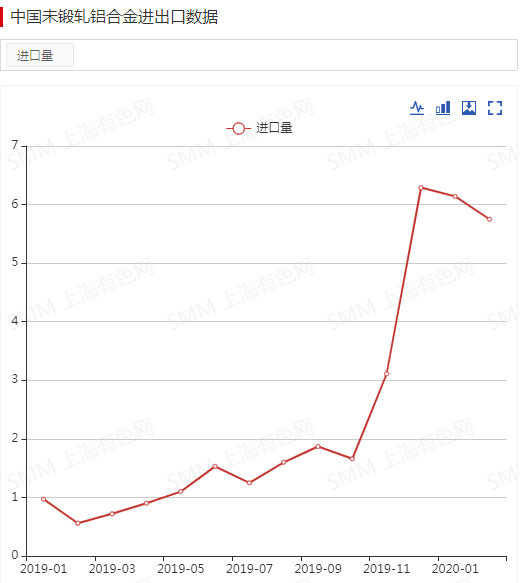 "Click to view the import and export data of China's unwrought aluminum alloy.

In terms of the flow direction of imported aluminum ingots, according to SMM, some of them have been consumed and some have not been sold, that is to say, invisible inventory exists, but it is very small compared to consumption. In terms of domestic aluminum ingots, the inventory of aluminum ingots in Guangdong on July 3 was 154800 tons, an increase of 3300 tons compared with last Wednesday. With the arrival of northern aluminum ingots and imported aluminum ingots, the supply of goods in circulation in Guangdong increased during the week, and the downstream just needed to purchase mainly. Traders actively ship goods. The market is more bearish followed by rising water, and the monthly difference also has a further expanding trend.

After entering June, the supply of waste aluminum is no longer the biggest factor affecting the rebound of the operating rate of recycled aluminum enterprises, due to weak demand at home and abroad, coupled with the impact of imported aluminum alloy ingots, the output of domestic enterprises continues to decline. From the perspective of overall consumption, July is the traditional off-season of the recycled aluminum industry, more than half of the enterprises expressed concern about new orders in July, while the implementation of the new standard of imported waste aluminum is still unclear, and the impact of imported aluminum alloy ingots in July is still not to be underestimated. And in terms of downstream demand, domestic manufacturers will enter the off-season with high temperatures from July to August, and most manufacturers also have plans to reduce or stop production, so the reduction of primary aluminum demand in July is a high probability event.

The new standard of waste aluminum has not landed as planned, so that a large number of overseas cheap waste aluminum can not flow into China in the short term, and the domestic ADC12 price is still stable. As of July 3, the price of mainstream recycled aluminum ADC12 was unchanged from last week, and the cash price of large enterprises ADC12 remained at 13,100,13,400 yuan / ton. In terms of imported aluminum ingots, the spot transaction prices in Hong Kong are mostly below 12500 yuan / ton. due to the stable quotation of overseas aluminum alloy ingots, the import profit of imported aluminum alloy ingots is limited and the price is stable.

In terms of import and export, the overseas forward arrival price has loosened after the end of August, with the mainstream quotation falling to US $1480 / ton and the port self-raised price of 12000 yuan / ton. with reference to the current domestic import ADC12 price, its profit is only around 300 yuan / ton. Before the new landing of waste aluminum, domestic ADC12 prices will continue to be stable, and the wait-and-see mood of some enterprises will intensify, and the purchase volume will be reduced.

At present, the sustainability of import arbitrage is mainly affected by two factors. One is to see the recovery of overseas demand, and the other is whether domestic scrap aluminum can be imported directly, but it has not yet been determined. Now it seems that the recovery of foreign demand will boost the price of scrap aluminum and import profits will decline.

In addition, the new standard proposed by the Nonferrous Metals Association has been approved and originally scheduled for implementation on July 1, but it has not yet landed, and the exact implementation is still unknown. The best case is to liberalize the import of waste aluminum, so there is uncertainty in the import of waste aluminum in the later stage.