SMM: due to the needs of operation and business development, Beijing Zhongke Sanhuan Hi-Tech Co., Ltd. plans to raise no more than 720 million yuan by placing shares to the original shareholders, after deducting the issuing expenses, for the construction of the investment project, of which, the new construction and technical renovation project of Ningbo Koningda base plans to use 390 million yuan, and the new project of Ganzhou base of the third ring road of China Science and Technology plans to use 330 million yuan. Specifically used for: 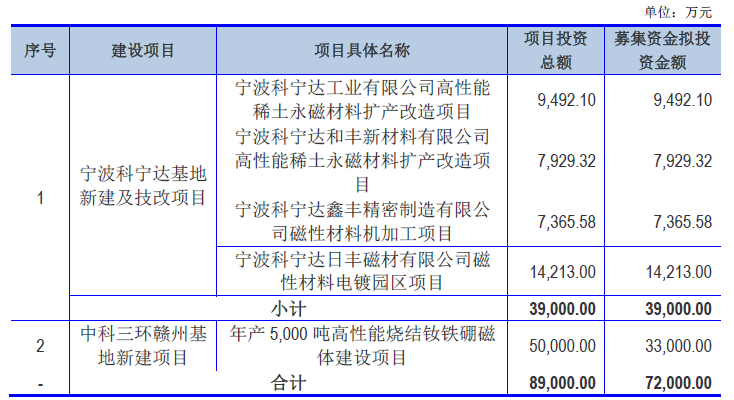 After the completion of the high-performance rare earth permanent magnet material expansion and transformation project of Ningbo Ke Ningda Industrial Co., Ltd., it can form an additional annual production capacity of 1575.00 tons of sintered NdFeB magnet alloy blanks (which can be processed into qualified finished products).

After the completion of the high-performance rare earth permanent magnet material expansion and transformation project of Ningbo Koningda Hefeng New Materials Co., Ltd., it can form an additional annual production capacity of 1687.50 tons of sintered NdFeB magnet alloy blanks (which can be processed into qualified finished products).

After the completion of the magnetic material machining project of Ningbo Corningda Xinfeng Precision Manufacturing Co., Ltd., it can increase the machining capacity of 2088.00 tons of sintered NdFeB magnets per year.

Zhongke Sanhuan said that NdFeB magnet is the third generation rare earth permanent magnet, which has the advantages of high magnetic energy product, coercivity and high energy density, and has been widely used in modern industry and electronic technology. At present, there are two production processes of NdFeB magnet materials-sintered NdFeB and bonded NdFeB. Bonded NdFeB is magnetic and corrosion resistant in all directions, while sintered NdFeB is generally divided into axial magnetization and radial magnetization, which has a wide range of applications, but it is easy to corrosion and needs surface treatment.