SMM7 March 3: this week Shanghai tin continued to rise slowly last week, of which weekly rose to 140240 yuan / ton. In Thursday night trading, under the influence of bullish entry, Shanghai tin main contract 2009 fluctuated all the way up, and rose sharply in late trading. After the opening, the bulls continued the trend of entering the night market. After about an hour of trading, the bulls rose to the highest point of the day of 140240 yuan / ton, briefly breaking the pressure level of 140000 yuan / ton, and then the bulls took profits and left the market, and the price dropped to around the opening level. Bulls entered the market a small amount, and the price went up. By the close of trading on Friday, 2009 of the main contract between Shanghai and tin closed at 139790 yuan per ton, an increase of 1.1 per cent in a single day. 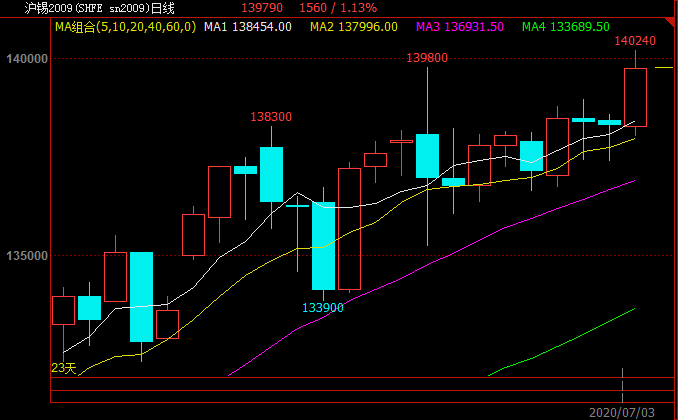 After the sharp drop in tin in Shanghai due to the impact of the epidemic, due to the country's effective control of the epidemic and good expectations, tin in Shanghai has risen steadily since the end of March. Recently, the macro environment continued to improve, and the Shanghai tin five-day moving average rose steadily. By the close of trading on Friday, Shanghai tin returned to the high level of the platform before the year before. The gap due to the decline in the epidemic has been basically made up, and the downside space is limited in the short term.

From a fundamental point of view, on June 27, the Myanmar Central Committee for the Prevention and Control of the New Crown virus announced that the control of the epidemic in Myanmar had been extended to July 15, and the shortage of tin mines in the country was expected to continue. The imported tin ore volume will remain at about 60% of the normal level in the short term, and the production crunch caused by tight mine supply is expected to support tin prices to some extent.

This week Shanghai tin 2009 contracts showed an overall upward trend of concussion. At the beginning of the week, tin opened at 137920 yuan / ton in Shanghai. At the beginning of the week, weak demand in the lower reaches of the week pulled down spot prices. Futures prices fell somewhat, reaching the lowest point of 136680 yuan / ton in the week, and then bottomed out. Bulls entered the market, giving up the decline and rising at the beginning of the week. The horizontal market fluctuated in the middle of the week, and its bulls continued to enter the market on Friday from the night market, reaching a weekly high of 140240 yuan / ton in the morning. After briefly breaking the pressure level of 140000 yuan / ton, it fell back to close at 139790 yuan / ton. The weekly level rose 1700 yuan / ton, or 1.23%, with 116000 hands traded and 29161 positions, an increase of 25521 hands. During the week, the main force of tin in Shanghai is positive, the physical part is above all weekly lines, and the lower shadow line is supported by the 5-week moving average. In terms of indicators, the opening of weekly MACD indicators is still upward, while that of daily MACD indicators is downward, but there is a trend that the two lines intersect and form a golden fork. The daily and weekly K lines are close to the upper track of the Bollinger belt. By today's close, Shanghai tin returned to the high level of the platform before the return year, because the gap of the decline in the epidemic has been basically made up, and the downside space is limited in the short term. Bulls continue to enter the market today, considering its position cost, it is expected that the upper pressure will be near the year-ago high of 140500 yuan / ton in the short term.

The spot price of Shanghai and tin as a whole showed a fluctuating upward trend this week. Affected by weak demand at the beginning of the week, the uplink was weak, downstream transactions warmed up, and a small amount of inventory. Then the average price rebounded to around 139250 yuan / ton following the futures, and in the middle of the week, the horizontal plate fluctuated, the center of gravity did not deviate greatly, and the spot price remained stable. Because the price is at a high level, the transaction atmosphere in the spot market is weak, and the willingness to receive goods downstream is general. Purchase on demand. To Friday, prices rebounded, the average price rose to 140250 yuan / ton, downstream enterprises are more willing to receive goods, the market turnover is light. Overall, the trading atmosphere in the one-week tin spot market in Shanghai is weak. The price quoted on Friday is 138000Lue 141,500 yuan / ton, with an average price of 140250 yuan / ton, up 750 yuan / ton from last Wednesday's price. In terms of liter discount, due to the continuous rise in tin prices superimposed by downstream fear of high demand, the overall liter discount this week has dropped significantly compared with last week, Yunxi has dropped from 2500mur3000 yuan / ton to 1000mur1500 yuan / ton, ordinary cloud word from 1500 yuan / ton to 1000 yuan / ton, small brand from 500 yuan / ton to near level water.