SMM5 March 27: previously, according to SMM research, since the sharp fall in aluminum prices in mid-March, the price gap between ADC12 and A00 aluminum has rapidly widened to more than 2000 yuan / ton, and due to insufficient supply of waste aluminum, the recycled aluminum industry has been forced to increase the proportion of A00 aluminum to hedge costs and supplement raw materials, and according to SMM calculation, the weekly consumption of original aluminum has increased by about 22000 tons. However, since April, aluminum prices continue to fluctuate upward, the original aluminum waste aluminum of recycled cast aluminum ingots has disappeared in mid-April; at present, the original aluminum waste aluminum is mainly concentrated in the aluminum water rod end, although the consumption is still there, but is gradually weakening. Secondly, due to the opening of the import window due to the strong internal and external weakness of aluminum prices, and the superimposed impact of the epidemic situation, the global flow of aluminum alloy ingots is accelerated; and the "recycled casting aluminum alloy raw materials" will be officially implemented on July 1. Will the domestic waste aluminum market face the landing of a new standard under the impact of imported sources? 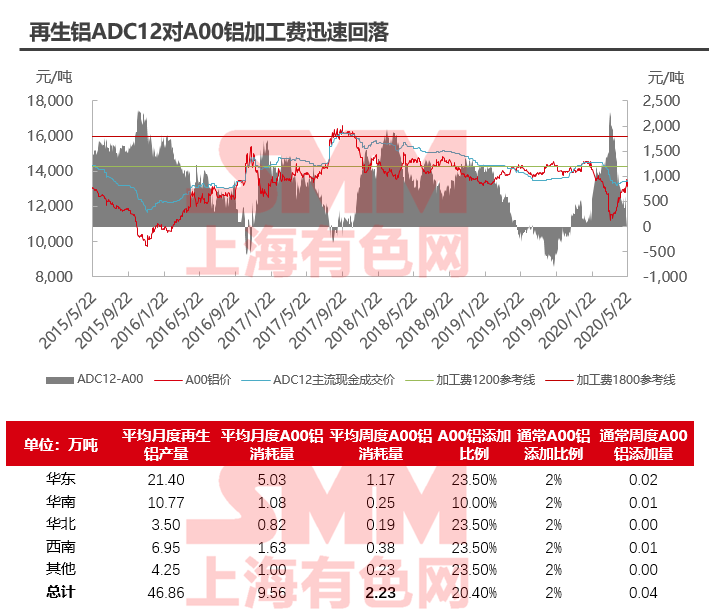 According to SMM research, aluminum prices have fallen since mid-March due to a shortage of waste aluminum. Traditional recycled cast aluminum alloys have increased the proportion of primary aluminum from around 2% to 20%, and weekly consumption of raw aluminum has increased by about 22000 tons.

Take the most core cast aluminum alloy in the recycled aluminum industry as an example, due to poor terminal demand, especially after the closure of overseas automobile plants, export orders almost completely disappeared after entering April. Previously, export orders accounted for a large number of enterprises had to enter the domestic market at low prices due to raw material inventory pressure, coupled with the slow growth of domestic order demand, recycled aluminum ADC12 prices gradually fell. Due to the slow recovery of domestic and foreign demand, the price of recycled aluminum ADC12 is weak, and due to the sharp increase in the delivery of imported aluminum alloy ingots in June, ADC12 may be upside down to the A00 aluminum price.

On the demand side, due to the weakening of export orders gradually exposed, while the bright spot consumer plate consumption phased stability, processing enterprises under the high inventory of raw materials for primary aluminum demand fell slightly. At the same time, the resumption of production of electrolytic aluminum and the introduction of new production capacity make the supply of electrolytic aluminum increase slightly, and the price of A00 aluminum may fall slightly in June, but its supply pressure is much less than that of recycled aluminum ADC12.

The waste aluminum of Zhongyuan aluminum bar still exists, but it is gradually weakening. 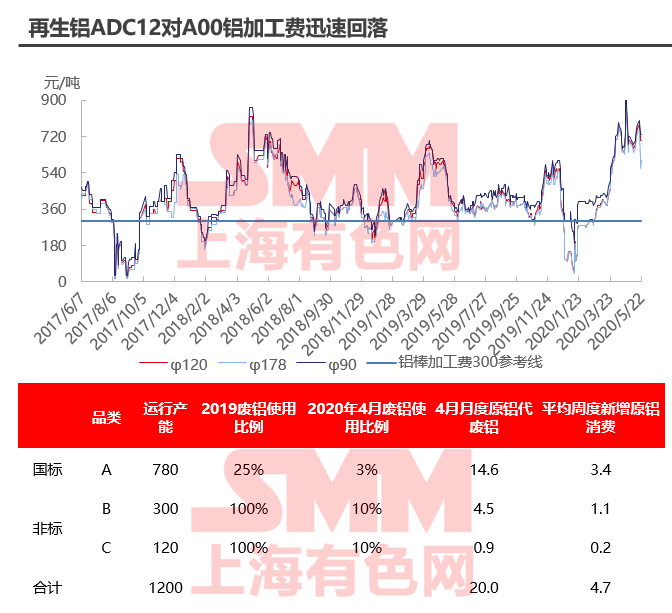 After entering May, due to the great increase in the fluidity of waste aluminum, the operating capacity of non-standard bars rebounded rapidly, which occupied part of the national standard aluminum bar market, resulting in a decline in aluminum bar processing fees, but it is still at a high level. Under this background, the amount of waste aluminum is mainly concentrated in the end of aluminum water rod, and its weekly demand is estimated to be about 30,000 tons.

Under the weak internal and external demand, the impact of import supply is becoming more and more intense.

The domestic epidemic situation has basically released the suppressed demand, and the automobile market is still under great pressure in May and June.

On May 10, 2020, the China Automobile Circulation Association released the results of the "Automobile Dealer inventory" survey for April 2020: the comprehensive inventory coefficient of automobile dealers in April was 1.76, down 12.0% from the same period last year, and 34.3% from the previous month. The inventory level is above the warning line. Automobile sales in April are close to the level of the same period last year, and the release of cumulative consumer demand from February to March has made a great contribution to the increase in April sales, but the pent-up demand during the epidemic has been basically released. to the late consumption pull decline, the automobile market will still face greater pressure in May and June.

The overseas epidemic affects the huge loss of cars and the recovery of demand still takes time.

In April 2020, the number of new passenger car registrations in the EU fell by 76.3% compared with the same period last year. The impact of the new crown virus has led to the biggest monthly drop in car demand since records began. As most 4S stores across the EU were closed for a full month, new car sales fell to 270682 from 1143046 in April 2019.

From January to April 2020, EU demand for new passenger cars shrank by 38.5 per cent due to the impact of the new crown virus on car sales in March and April. New car registrations in three of the EU's four main car consumer markets have halved so far this year: Italy-50.7%, Spain-48.9% and France-48.0%.

As of May 18, due to the shutdown of the entire car plant, the loss of car production across the European Union has reached at least 2424955, and the current average shutdown time of the whole vehicle plant is as long as 30 working days.

The impact of the epidemic has accelerated the global flow of aluminum alloy ingots into China.

According to customs data, imports of unwrought aluminum alloy and scrap aluminum scrap totaled 85000 tons in April 2020, down 16.5% from the same period last year. From January to April, the total import volume of unwrought aluminum alloy and scrap aluminum scrap totaled 536000 tons, an increase of 3.8% over the same period last year. Affected by the epidemic, on the one hand, the supply and liquidity of domestic waste aluminum have decreased significantly, on the other hand, the weak overseas demand makes the overseas recycled aluminum supply in a state of surplus, and the impact of import sources on the recycled aluminum market is increasing. When six types of waste aluminum will be added to the import list of the restricted category in July 2019, there is an obvious phenomenon of grabbing the import of waste aluminum in Q2 in 2019, while the import growth of recycled aluminum mainly comes from aluminum alloy ingots because the waste aluminum has entered the restricted category in 2020.

The strong domestic demand for overseas cheap recycled aluminum has led to a rapid rebound in its prices.

Except for the existence of domestic branch plants of recycled aluminum enterprises in Malaysia and large imports, the import of aluminum alloy ingots is tends to be dispersed, and under the influence of overseas epidemic situation, there is a time lag for the recovery of overseas automobile industry compared with that at home, which accelerates the flow of recycled aluminum alloy ingots into China.

The new standard will be launched in July and there are variables in the structure of import sources in the second half of the year.

"Raw material of recycled cast aluminum alloy" will be officially implemented on July 1.

The continuation of the approval system will affect the imported types of recycled cast aluminum alloy raw materials.

According to the previous market news, the total amount of aluminum scrap imports in 2020 may be about 50% less than that in 2019, that is, only about 700000 tons of aluminum scrap will be imported in 2020. However, due to the impact of the epidemic, it is said that the new standard of imported waste aluminum will be circulated to remove the approval system and relax the import volume. The continuation of the approval system will directly affect the import types of recycled casting aluminum alloy raw materials, if relaxed, the import of aluminum alloy ingots will quickly return to waste aluminum.

Consumption has hit bottom in stages and the recovery of recycled aluminum consumption in the second half of the year is still possible.

On May 5th, four EU auto industry associations (ACEA,CECRA,CLEPA and ETRMA) jointly released 25 immediate and practical policy recommendations. They are designed to help deal with the new crown pneumonia crisis, ensure a successful recovery of the economy as a whole, and support and guide the restart of the auto industry. 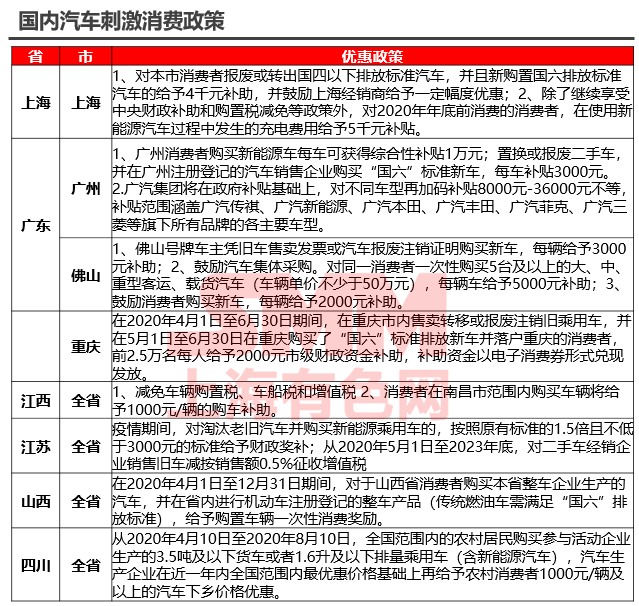 Due to the impact of the epidemic, strict epidemic prevention measures overseas have been implemented for more than a month, and the current demand for cars has hit rock bottom. In the second half of the year, the overseas epidemic is bound to be improved, or even significantly controlled, which will lead to a sharp rebound in overseas car-related demand, and even significant retaliatory consumption at one time. On the domestic side, the impact of various policies to stimulate automobile consumption will eventually be gradually reflected, and in the second half of the year, from the perspective of marginal changes, automobile consumption will continue to grow. Therefore, although the current domestic and foreign automobile industry consumption has also reached a trough, the impact of the epidemic weakens in the second half of the year, the recovery of recycled aluminum consumption can still be expected. 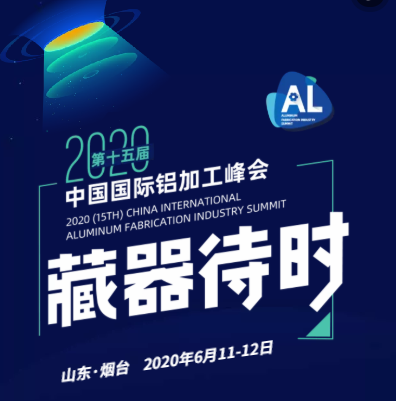