CST
translation
Source:SMM
[SMM brief comment: funds tend to hedge gold price in the later period] the depreciation of the RMB exchange rate supports the inner market gold price, Europe and other countries release water again, the world's major central banks maintain a loose tone, interest rates move down again and again, and inflationary pressures are likely to rise. Generally speaking, there is great uncertainty about the global epidemic, and it still takes time for economic activities around the world to return to a normal cycle, and the outlook for the global economy is not optimistic. Safe-haven demand will continue to support gold prices.

SMM5 March 28: gold futures rose again today, as the latest round of stimulus measures offered by the European Union and other economies to alleviate the impact of the epidemic brought support, coupled with the fact that the Canadian court announced that the outcome of the Meng Wanzhou extradition case was not optimistic, and the market was worried about the escalation of tensions between China and the United States to revive risk aversion. 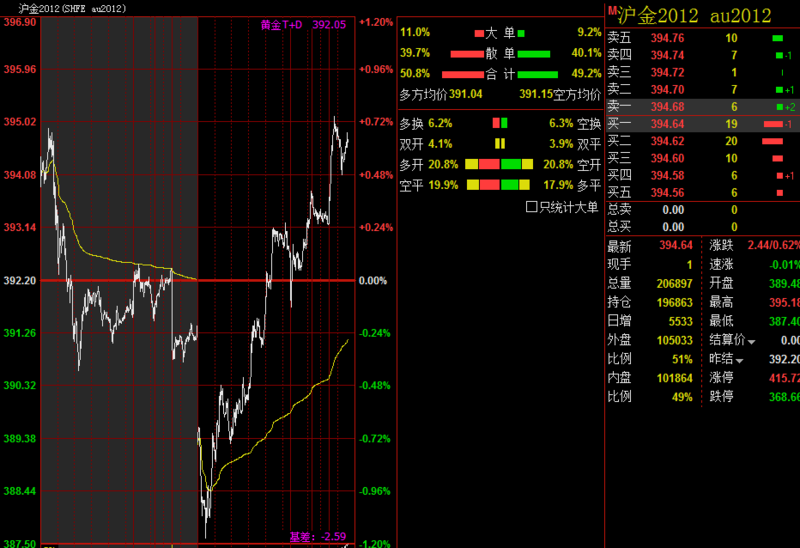 Europe and other countries have released water again, and the market is looking for a safe haven for precious metals. Europe and the United States and other countries have flooded frequently since the first half of the year, major central banks around the world have maintained a loose tone, interest rates have repeatedly moved down, and inflationary pressures are likely to rise. The European Commission on Wednesday unveiled another 750 billion euro plan to support economies hit hard by the new crown crisis. This has increased demand for safe-haven assets such as gold. Japan approved a new $1.1 trillion stimulus package on Wednesday. India may need to bet nearly $20 billion on state-owned banks, according to sources. On the gold demand side, SPDR Gold Trust, the world's largest gold listed trading fund, said its gold position on Wednesday increased by 2.34 tons, or 0.21%, from the previous day to 1119.05 tons.

In addition, the depreciation of the RMB exchange rate supports the inner price of gold. Both offshore and onshore renminbi weakened yesterday, with the offshore renminbi falling below 7.17 to 7.1762 and onshore to 7.163, with fluctuations of more than 250 basis points, the lowest since September 4, 2019. The industry believes that the current round of RMB decline due to undetermined macro targets and Sino-US relations are still treated cautiously by the market, risk aversion is still the main pressure of exchange rate depreciation. When the RMB depreciates, the inner gold attracts a large amount of foreign capital to protect the exchange rate and stabilize the confidence of the domestic market by increasing the premium. In the later stage, there may be room for gold to rise, resulting in a rising market.

Generally speaking, the global epidemic has not significantly improved, it will take time for economic activity around the world to return to a normal cycle, the global economic outlook is not optimistic, and inflationary pressures add to the uncertainty of economic recovery. as a result, safe-haven demand will continue to support gold prices.

Analysts at Societe Generale said they raised their forecast for gold prices for fiscal 2020 to $1700 an ounce. Gold prices are expected to peak in the fourth quarter of 2020, averaging $1800 an ounce.

Phil Flynn, senior market analyst at Price Futures Group, said some of the pressure on gold could be long-term long clearing by futures traders, who chose to withdraw their bullish position in the June contract by the first notice date at the end of the month rather than transfer it to August futures. In addition, he added, some traders may have pulled out of the gold market and entered the stock market. But Flynn said that even if the stock market continues to rise, he still believes that gold will break through, as gold will at some point respond to huge stimulus and large money supply.

Ilya Spivak, currency strategist at DailyFX, said the gold market had fallen below a key support of $1715 an ounce in the past 24 hours. Expectations of the end of the American home order brought a more positive mood. On the other hand, trade problems still bring a lot of risk aversion.