CST
translation
Source:SMM
SMM5 March 21: the foreign trade copper market has maintained a hot market for nearly a month and a half, and the market activity has obviously weakened this week. Yangshan copper premium hovered for many days, it is difficult to see a rise. The import window of electrolytic copper is closed this week, and the weakening import price directly suppresses the market demand for goods, while traders mostly wait and see, and the market turnover is limited. Import losses continue to expand, Yangshan copper premium high fall.

After maintaining a hot market for nearly a month and a half, the activity of the foreign trade copper market has obviously weakened this week. Yangshan copper premium hovered for many days, it is difficult to see a rise. The import window of electrolytic copper is closed this week, and the weakening import price directly suppresses the market demand for goods, while traders mostly wait and see, and the market turnover is limited. Import losses continue to expand, Yangshan copper premium high fall.

The weakening of domestic refined copper consumption is the main reason for the premium decline. According to SMM research, after entering May, the performance of new orders is downward, and it is difficult to maintain the pre-consumption caused by the rush to complete the backlog of orders. In addition, the price difference of fine waste gradually widens to around 900 yuan / ton, and the price advantage of scrap copper is revealed, and as the shipping of scrap copper in Malaysia returns to normal, the demand for processing of refined copper instead of scrap copper will be further compressed. Judging from the situation of going to the warehouse in China, copper stocks in the last period of last Friday fell for eight weeks in a row, rising 4671 tons a week to 208890 tons, a weekly increase of 2.29%. The output of stocks in Shanghai and Guangdong also declined.

Due to the weakening of consumption, the removal of treasury in China has slowed down. although the domestic back structure has been maintained after the change of months, the price difference between the two months has narrowed from 220yuan / ton to about 60 yuan / ton. Compared with the strength of the outer disk, the internal and external price ratio was significantly weaker than last week, the import changed from profit to loss, and the market import demand decreased significantly. 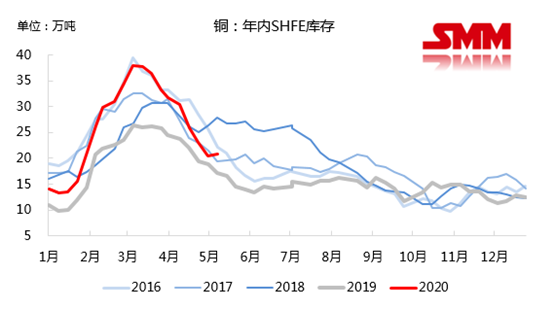 From the supply side, with the relaxation of the blockade policy of the epidemic, overseas shipments and shipping dates became more stable, US dollars and copper arrived one after another to declare imports, and goods transported from LME warehouses and zero orders transferred from overseas smelters arrived at home, easing the contradiction between domestic supply and demand. Traders have a sufficient supply of long-term incoming goods to Hong Kong, the market is weakening, and the mood of consignors to sell goods is getting stronger and stronger. The concentration of copper imports in Hong Kong in the next two weeks is also expected to put pressure on spot domestic trade, which is not conducive to the premium.

At present, at a time when the domestic "two sessions" are being held, some holders remain on the sidelines because of the bet that more economic stimulus policies will be introduced to benefit copper consumption, the number of offers is limited, and the overall performance of transactions is light, but a small number of low-price shipments still lead to a rapid decline in premiums. As the country gradually enters the state of accumulation, it is expected that the future premium will continue to fall. Cymbal