Gold initially rose to $1719.6 an ounce yesterday, then gradually fell back and is now trading around $1714 an ounce. 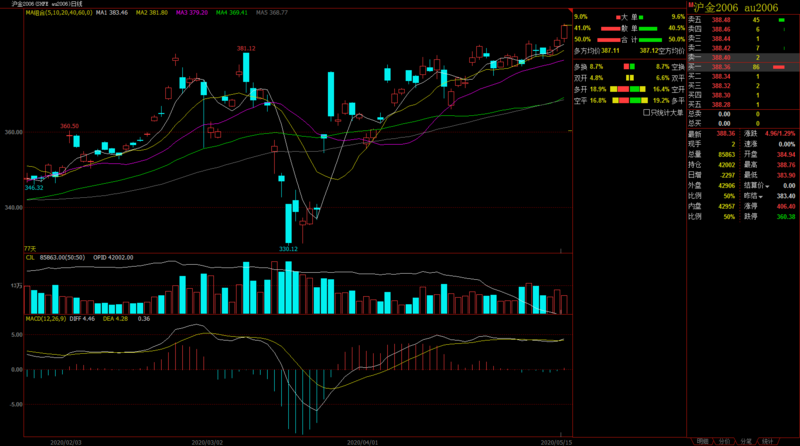 In a speech last night, Federal Reserve Chairman Colin Powell reiterated that the Fed did not consider negative interest rates, although other central banks, such as the Bank of England, were open to the idea. The epidemic has affected the global economy. The market has been looking for safer assets to invest, and the US dollar has become one of the best targets. The market expects that because of the possibility of a secondary outbreak, if it becomes a reality, it will bias the recovery in the original normal track. The main factor supporting the US dollar before is interest rates. If the United States uses more bailout measures in order to revive the economy again, Interest rates in the dollar are likely to turn negative.

In addition, the impact of the epidemic on employment in the United States is enormous. At the same time, the empty situation of the epidemic in the United States is worrying, and it is necessary to actively open up commercial activities, raising fears in the market. On the one hand, unemployment restricts economic recovery, and on the other hand, the resumption of business activities may cause another outbreak of the epidemic, thus aggravating the worries of investors. The latest data show that The number of first-time jobless claims in the United States reached 2.98 million last week, and despite six consecutive weeks of decline, the number of unemployed remains high, with more than 36 million unemployed in the past seven weeks. The new crown pneumonia epidemic continues to deal a severe blow to the U. S. labor market. As a result, risk aversion in the market has increased, pushing up the price of gold again.

U.S. president Donald Trump said in an interview with Fox News Thursday that the United States could cut off the entire relationship between the United States and China, which could save the United States $500 billion. Long-term weakness in the economy has repeatedly made investors unwilling to fade, coupled with previous US-China trade fuss, causing international investors to worry about the recovery and development of the global economy. Trump's remarks, in addition to stimulating investors, money is biased towards safe-haven assets, and concerns about strained trade relations between China and the United States have led to the sale of riskier assets.

Earlier, the World Health Organization said the new coronavirus may never disappear, causing investors to worry that the economy will remain in the doldrums for a long time. European stock markets suffered a heavy sell-off on Thursday, with all three major stock indexes closing lower, with the London stock market falling more than 2.7%. The current economic woes, coupled with the UK government's tough attitude in previous trade negotiations with the EU, have weakened the pound, while the poor performance of listed companies in the European market in the first quarter has dampened investor confidence, investors are more biased towards safe haven assets such as gold than equity risk assets.

A variety of factors jointly promote the rise of gold prices, if the epidemic can not be lifted in time, the resumption of commercial activities, so that the European and American economies into endless trouble, the risk will exist for a long time, the future is worth looking forward to.

Market bulls remain optimistic about the outlook for gold, as many investors believe the current environment is similar to or worse than the 2007-2008 financial crisis. "if a similar pattern repeats itself, gold could hit $3500 or even $4000 over the next three years," Hussein Saeed (Hussein Sayed), chief market strategist at Fortis (FXTM), wrote in a daily research note. " He added: "while history does not necessarily repeat itself, there are too many factors that can support gold prices to continue to rise."

Founder medium-term futures researcher Shi Jialiang said that due to the continuation of the deep recession in the United States, the resumption of work and resumption of production did not meet expectations, the Federal Reserve called for negative interest rates again. However, he believes that the possibility of negative interest rates in the United States is very small. Although the CPI is still facing the danger of tightening in the near future, the Fed's bottomless QE policy has led to inflation becoming the biggest risk point in the future. The Fed will maintain zero interest rates for a long time, and ultra-loose quantitative easing will continue.

Overall, the CIC Amxin futures research team believes that the global economy is facing an unprecedented recession, the Federal Reserve will continue to sacrifice economic policy, extremely loose monetary environment will make US bond real yields remain negative, the dollar is difficult to long-term strength, gold medium-term upward trend unchanged. The trade-off between the short-term epidemic and economic restart has made risk aversion wavering, and gold is expected to maintain oscillations for the time being and wait for new drivers.

The price of gold