As of Thursday, the domestic spot quotation for electrolytic manganese retail in various regions was maintained at 10700-10800 yuan / ton (shipped in cash), and retail orders were unwilling to be less than 10700 yuan / ton. The negotiation range of futures orders between the two sides of the market was also slightly higher than last week. The prices of ore and processing raw materials gradually rose, supporting a short-term increase in manganese prices. At present, the spot resources of some manganese plants are limited, and there are more orders to be produced and delivered in mid-May. The overall operating rate of manganese triangle and Guangxi remained stable in April compared with April. SMM predicted that the average price of electrolytic manganese in May might fall within the range of 10750-10850 yuan / ton. 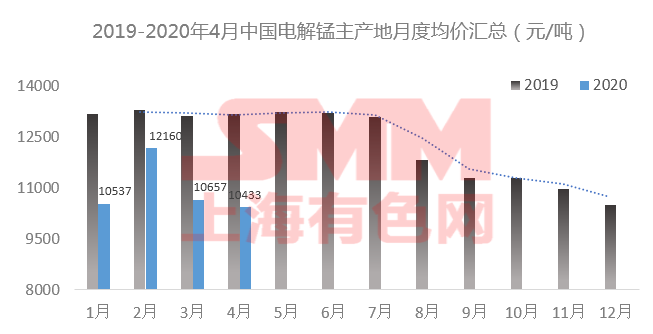 In mid-May electrolytic manganese export quotation in the domestic market support sentiment only increased, China FOB electrolytic manganese quotation slightly increased by 10 US dollars / ton compared with the beginning of the week, the average price remained at 1530 US dollars / ton, according to foreign traders said that the epidemic control in some overseas countries compared with the first quarter indicated that there is an improvement, the European region within the week to increase inquiries, but the overall demand in overseas markets to return to the performance of the year before still need to wait and see. As of Thursday, the cold rolling coil prices in the two regions of Xifo remained mainly in the range of 7200-7400 yuan / ton, and the opening of mainstream steel mills in the market rose by 100 yuan / ton, promoting the overall upward quotation in the 201 market of Xifo. among them, the mainstream base price in the two markets is around 7300-7400 yuan / ton, Hongwang / Chengde (Beibu Gulf New material) temporarily quoted 7350 yuan / ton, Castle Peak Hongwang reported 7050 yuan / ton. The overall month-on-month average market price showed a marked upward trend compared with March.

The actual market transaction under the high range of 200 series steel price indicates that it is strong first and then weak. Although the market price of private resources is much stronger than that at the beginning of this month, the downstream demand is limited, and the early demand is still OK, but the later stage remains to be followed up and wait and see. In the short term, supported by the steel mill guidance price, the 200 series steel price may be stable and small to adjust.