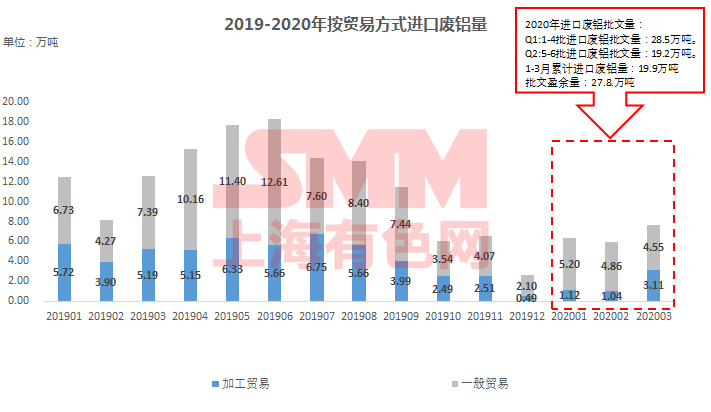 The increase in the amount of imported waste aluminum is mainly due to the volume of processing trade, and this increase is mainly due to the significant increase in the export of aluminum alloy ingots from processing trade. Due to the epidemic situation affecting the problem of non-synchronization at home and abroad, recycled aluminum enterprises resumed production in March and rushed to hand over previous export orders, resulting in a significant increase in the amount of waste aluminum imported as a result of processing trade exports in March. However, it can not be ignored that under the influence of the epidemic, recycled aluminum consumption at home and abroad has declined significantly compared with the same period last year. 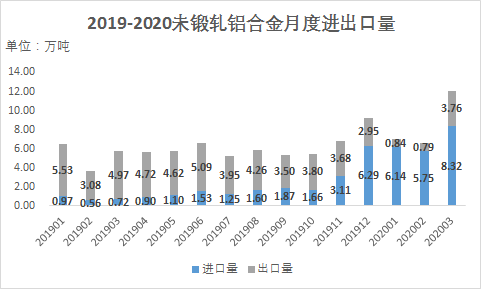 According to SMM, the export increment of unwrought aluminum alloy is mainly caused by the backlog of orders handed in by recycled aluminum enterprises in March. This part of the data increment can be confirmed by a significant increase in the import volume of imported waste aluminum processing trade. However, according to corporate feedback, due to the impact of the epidemic, export orders fell sharply in April, and even some exports were transferred to domestic sales, and the export volume of unwrought aluminum alloy in April is expected to decline significantly. The increase in import data is mainly due to the delivery of orders before the Spring Festival. Due to the narrowing of price differentials at home and abroad, new import orders for aluminum ingots have dropped sharply, which is expected to be reflected in April, so imports of unwrought aluminum alloy are expected to fall back significantly in April. From the point of view of the import country, it is still dominated by Malaysia, South Korea and other countries of origin. However, after entering April, the market feedback on the import of Indonesian supply increased significantly, and it is expected that the proportion of unwrought aluminum alloy imported in different regions will change obviously in April.