CST
translation
Source:SMM
Since April, import prices have continued to improve, Yangshan copper premium has increased significantly. As of Friday, April 24, the average price of warehouse receipts and bills of lading was up $22 a tonne from the beginning of April. In particular, from April 20 to April 24, warehouse receipts and bills of lading increased by $6 and $5, respectively. At present, Yangshan copper warehouse bill quotes US $84-94 / ton, bill of lading quotes US $80-90 / ton, QP is May.

Since April, import prices have continued to improve, Yangshan copper premium has increased significantly. As of Friday, April 24, the average price of warehouse receipts and bills of lading was up $22 a tonne from the beginning of April. In particular, from April 20 to April 24, warehouse receipts and bills of lading increased by $6 and $5, respectively. At present, Yangshan copper warehouse bill quotes US $84-94 / ton, bill of lading quotes US $80-90 / ton, QP is May.

The rapid rise in premium is mainly due to the continuous opening of the import copper window, affected by the import price, the copper foreign trade market before the light stalemate, buyers and sellers trading enthusiasm is high. The buyer actively inquired for the goods, and the demand concentrated on the warehouse receipt and the arrival bill of lading in recent months, but the supply was in short supply, and the average transaction price of Yangshan copper rose rapidly within the week. 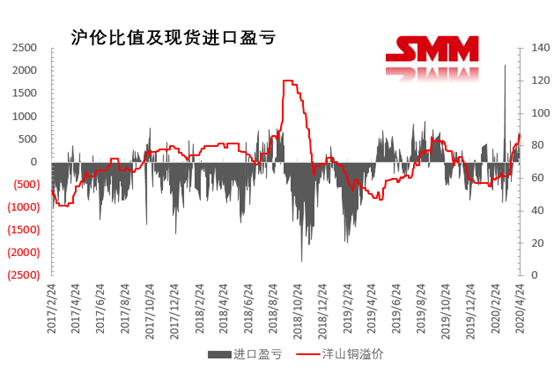 The stronger import price has directly stimulated the increase in demand for imported copper. In April, the centralized maintenance of a number of domestic smelters caused a tight supply of copper in China, especially in North and South China. The sharp reduction in scrap copper imports narrowed the price spread of superimposed fine scrap, stimulating downstream enterprises to use refined copper instead of scrap copper production, and boosting domestic demand, and maintaining a high level of water in the domestic trade market. The contango structure of LME does not change, the domestic futures contract is strong in recent months, the copper price is strong inside and outside, the import profit window continues to open, and the customs declaration profit increases to stimulate the import demand. According to SMM research, as of April 24, Shanghai bonded area copper stocks continued to decline to 305800 tons, inventories fell for five consecutive weeks. 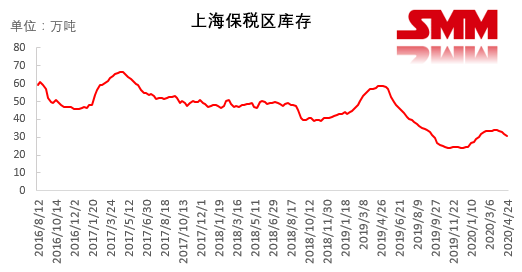 In the case of warm market demand, the supply of imported copper is tight, so Yangshan copper premium has risen rapidly. Affected by the epidemic, Chile, Peru and other major exporting countries of electrolytic copper have implemented epidemic blockade measures, and delays in overseas shipments have frequently occurred, resulting in a decrease in the number of copper imports in April and a limited number of goods held by traders. Therefore, in the face of concentrated demand in the market, quickly raise the offer.

According to SMM, traders increased their stocks of LME copper, mainly arriving in China in mid-May. Affected by the impact of Japanese orders to India, the number of bills of lading arriving in Hong Kong increased significantly in mid-late May and early June. It is expected that the shortage of import sources will ease in mid-to late May, when domestic copper imports will increase, and spot sales at home and abroad will face an impact. from the demand point of view, domestic consumption is performing well at present, partly because downstream enterprises rush into production to complete the pre-backlog of orders and terminal bottom copying, as well as hoarding due to expectations of tax cuts, and the current consumption performance is expected to last until May. However, there are still doubts about the sustainability of domestic consumption after May, and whether the tax reduction policy will fall or not will also affect the demand of the foreign trade market. In terms of supply and demand, Yangshan copper premium in mid-and late May will come under downward pressure.